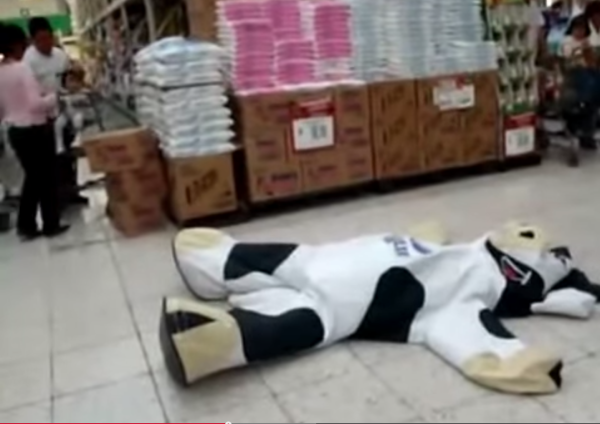 Is it possible to go back to the toilet stall and leave Duchamp’s urinal in place and call it art, right where it is, in that filthy space, without the gallery, without context?

What does art without context look like? The prophet Hennessy Youngman in his 2011 video “ART THOUGHTZ: Relational Aesthetics” provides a possible recent example, when he anoints Sexy Sax Man as the best artist of 2011. Sexy Sax Man performs completely outside of context of the familiar theater, club, gallery or busker’s corner; instead he uses our modern-day cathedral—a shopping mall—where we consume and follow the voice of our contemporary authority, which is capitalism.

The basis of Duchamp’s awesomeness is that, with the ready-made, he provided the foundation for valuing idea over object. But Duchamp, through Dada, also called attention to the importance of context, and we’re still indebted to him. Dada created its own platforms and spaces wherever it could: cafes, the salon, the street, etc. But no one would have played along if Duchamp pointed at the urinal in situ and said it was art. Only by moving it to the gallery and thereby changing its context to “art” did it become art.

Now, in the 21st-century shift from democracy to corporate oligarchy, there’s a rebellion against the white cube and its establishment connotations. Art (and culture in general) seems to have stagnated; it regurgitates and remixes previous art moments. Dada returns in the form of the gallery apartment, pop-up, and all iterations of alternative spaces. But under all this, context still dominates; a gallery apartment is art space to us because we can still say of it: “this is where we see art.”

Among thousands of examples in a constant stream of uploads, here’s another of art without that context: Manchas, Alpura’s dancing cow. Alpura is a corporate dairy company based in Mexico. There’s a popular viral version of Manchas with over three million views on YouTube; I fully understand that Manchas is a corporate device with the sole intent of moving product.

But there’s another pirated video of Manchas that does more. It is absurdly narrative; at one point Manchas collapses and two children are recruited to provide CPR only to be attacked by the cow. Then couple that with a glitch in the camera taking the video, which creates at times a surreal flattened landscape that feels disorienting, dizzy and wonderful all at the same time.

To be clear, I’m not proposing that in each video the performers are the artists, but that what Hennessy and I are doing is a version of what Duchamp did: we are finding art, free of expected context. It’s another riff on what Rauschenberg did with his letter, saying it is indeed a portrait if an artist says it is.

Unfortunately, both Sexy Sax Man and Manchas were quickly co-opted and exploited by corporate overlords for profit. The speed with which art is flipped and exploited is lighting fast, from days to mere hours before this near-accidental art becomes commercial pabulum. Art without context is possible, but it only occurs in brief bursts and is ephemeral. But its also fortunately everywhere. You just need the eye of an artist to catch it in its fleeting moments.