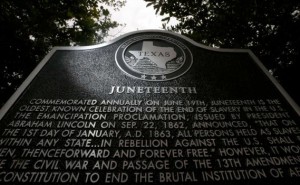 People all over the country have been holding vigils for the nine people who were killed in the mass shooting at Emanuel AME Church in Charleston, S.C., on Wednesday, and today (and throughout the weekend) people will be celebrating Juneteenth with parades, picnics, and music. While it’s difficult to reconcile the grief with the celebrations, it seems like a crucial year to show up to commemorate the 150th anniversary of the day Texan slaves were freed. 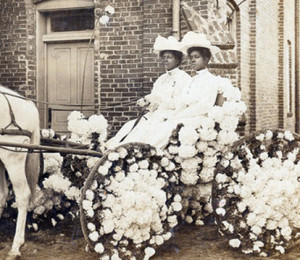 Juneteenth (then called Emancipation Day) celebrations have been taking place every year since, but it was not until 1979 that a bill was introduced to make it a state holiday (and many other states later followed suit). It was not until last year that a historical marker (photo above) was erected in Galveston on the spot where the original announcement of emancipation was made. And the spellchecker on the computer used to write this post still does not recognize the word “Juneteenth.”

So here are a few links to some of the festivities throughout the state (but check for weather-related updates).