What Really Happens When Two Artists Shack Up 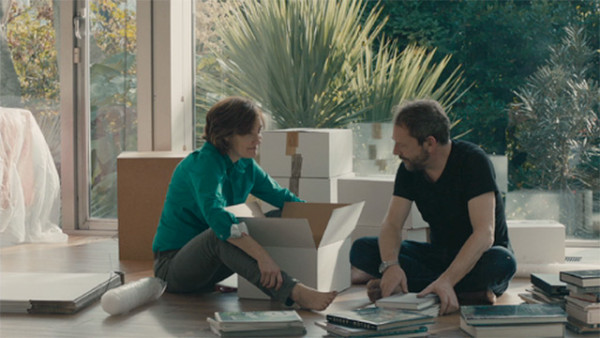 The Netflix member reviews for the 2013 movie Exhibition are some of the more polarized I’ve seen. I read them last night. I first watched the movie a year ago without any priming other than a few reviews in London newspapers, which were overwhelmingly positive. But then movie critics are the type to identify somewhat with the movie’s introspective protagonists.

I watched Exhibition, Joanna Hogg‘s third feature, again this week because the Fort Worth Modern will be screening it soon, and I wanted to write something in advance of it. Here are a few lines from the one-star and no-star viewer member reviews, which seem to make up the majority:

“This is time out of my life I can’t get back.”

“WHY IN THE WORLD DO PEOPLE KEEP GIVING HER MONEY TO MAKE MOVIES… DEAR GOD PLEASE STOP!”

“Worst movie I’ve ever tried to watch. I only got about 20 minutes in but it felt like a terrible lifetime.”

“Very, very slow film about two people bent on self destruction.  I gave it two stars because of the house which is very cool. Other than that, don’t waste your time.” 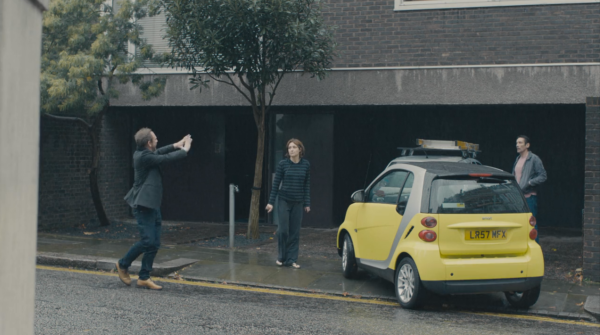 If you’re a creative person who lives in the world of abstract ideas, these remarks are a good indication of how self-indulgent much of the world thinks you are. There are two scenes in Exhibition which nail this dismissiveness. The two lead characters are middle-aged, childless artists D and H (played by musician Viv Albertine of the Slits and the artist Liam Gillick), married and successful, who live in a noted modernist townhouse in west London, and have for 18 years. At one point a contract worker employed in the neighborhood parks his car in their carport because he can’t spot the delineation between their clean-lined property and the street. When H (Gillick) starts hurling expletives at the man and ordering him to move his car, it’s clear that though the two men are standing six feet from one another, they’re worlds apart. As H points at his house and yells “Context!” the interloper can’t begin to comprehend his trespass. Whatever H is talking about is far too esoteric and subtle for an outsider. The stranger rambles out of frame. 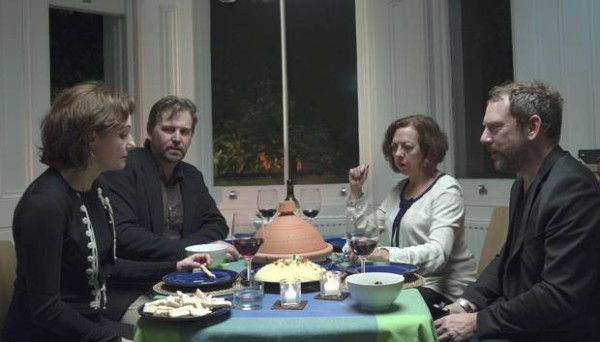 In a later scene, D and H are dining with married couple, their neighbors, in the traditional townhouse across the street, and the neighbor woman, when not fretting and preening about her teenage son, makes it clear that she thinks D and H’s architectural gem of a house is just too weird for her: “It’s not a family home. It’s an artist’s home.” Out of sheer boredom, D pretends to faint, so she can excuse herself and get back to her own house. 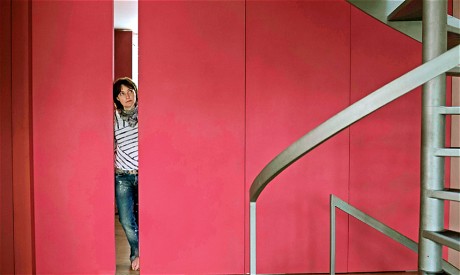 Given that Exhibition presents one of the best narratives I’ve seen of working artists’ day-in-day-out routine, and that you can count on two hands the number of movies that deliver this material with any mix of verity and lyricism, it’s disheartening to be reminded of how impatient so many people are with D and H as well as their aesthetic and intellectual relationship to their house. Most professional movie reviews have correctly focused on the house’s influence on its occupants’ lives and work. To Netflix viewers, H and D are self-serving, neurotic people in a kind of trancelike, extended adolescence. To those of us who actively pursue art every day, they are surrogates for ourselves: careful, rigorous, self-protective, ultra-sensitive to their environment. And it’s of course fascinating to see some version of your life on camera as it’s interpreted by an incisive filmmaker. 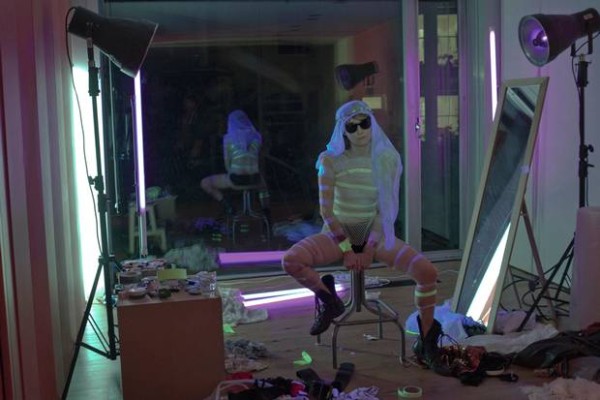 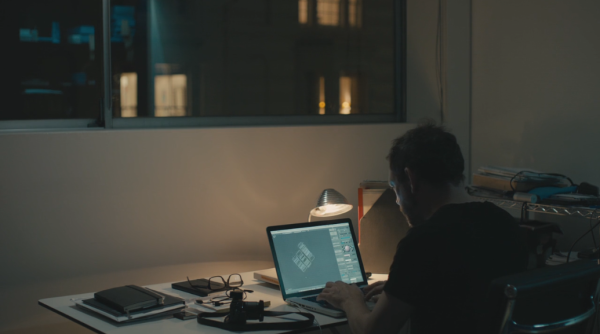 Creative or artist couples might, by necessity, present a united front to the outside world with an “us against them” mentality, but the nitty-gritty reality of life in the privacy of a home is more nuanced, because no two creative people are exactly alike in how they create and what they value about that process, and creative people who get to make a living creating are fiercely protective of the kind of artist they’ve turned out to be. D and H are about as different as two artists can be, with D in her downstairs, salmon-pink studio room instinctively feeling her way into a sexually charged performance with props and clothing, and H in his upstairs, sterile-white office analyzing schematics on a computer.

D and H are politely yet firmly at odds through much of the movie, and to some degree the house plays the part children or pets would in many tense couples’ lives: it’s a thing outside themselves to focus on. But the house has been anthropomorphized well beyond its “machine for living” utility. It constantly oppresses and inspires D; she is essentially in love with it. It’s a symbol of H’s worldy success and worthy of his intellectual standards, but he’s ready to leave it. He needs to conquer something new. 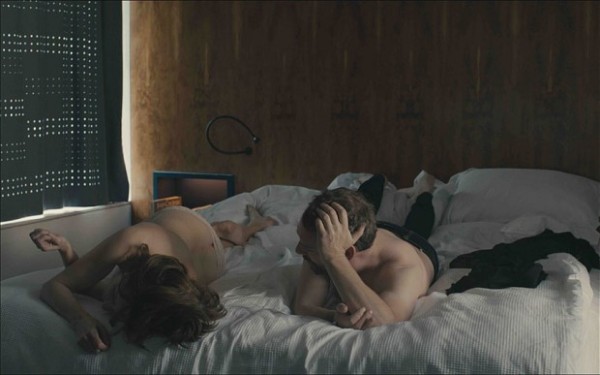 Due to D and H’s differences in creative approach, they slide and pivot emotional walls around themselves and each other, like the panels throughout the house, to reconfigure their intimacy. Like most artists and creative people I know, they are moody, prickly, private, and their individual egos are the elephants in every corner, and expand when given outside validation. One telling back and forth takes place when H asks D to reveal something of her process and she hesitates, and finally says:

“You’re very withholding. You never talk about your emotions or what you’re feeling.”

“That’s a construct. People are different,” he says.

“Then what am I doing in the end? I’m company?”

“Yeah, you’re my companion,” she says. 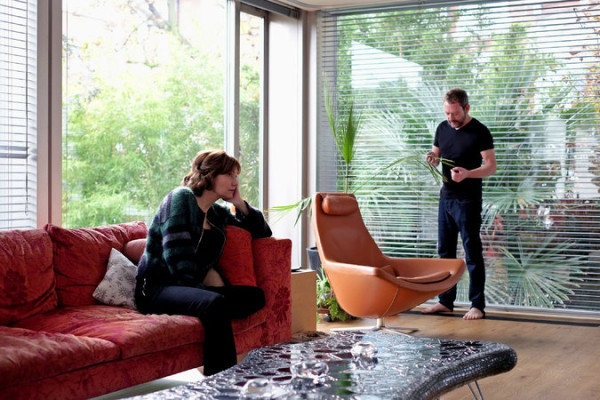 These two people have engineered a life that fundamentally respects the process of creating, just as they give each other the room to do so within and outside the house. During the day, they don’t even leave their respective work spaces when they want to talk; they use the house phone’s intercom system.

To non-creative people, this must look nuts. But the conditions in which art is made require a specific context, time, and space, and a person with the disposition to see it through. Moviemakers have always said that it’s hard to make a movie about a writer because watching a person type isn’t compelling; it doesn’t look like an explosion in an X-Men movie. It looks like Exhibition.

‘Exhibition’ will screen at the Modern Art Museum of Fort Worth on June 23 at 7 p.m. Info here.

Thanks again Christina. Very insightful and a great set-up for DFW people to see it on the big screen at the Modern next Tuesday. I particularly appreciate your mention of the …companion.” exchange. It was one of my favorites in the way that it begins to sum some things up and make sense of others.