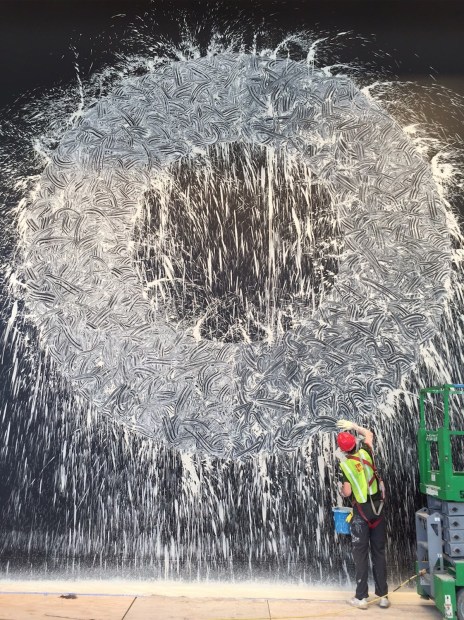 Renowned British land artist Richard Long was in Dallas over the weekend to install a massive wall piece in the lobby of the new building that anchors Hall Arts, developer Craig Hall‘s five-acre complex in the middle of the Arts District behind the AT&T Performing Arts Center. The high-rise building, KPMG Plaza,  once it opens, will house offices for Jackson Walker, UMB Bank, Hall Financial Group and a restaurant by Stephen Pyles.

Long flew in to execute the installation himself (along with an assistant) and was accompanied by Glasstire friend and Lisson Gallery director Joanna Thornberry, who texted over the accompanying photo. This is among the first of the artworks that are meant to take up residence indoors and out at Hall Arts. Long named the White China clay piece while he was here: it’s called Dallas Rag.