by Caitlin G. McCollom May 31, 2015
FacebookTwitterEmail 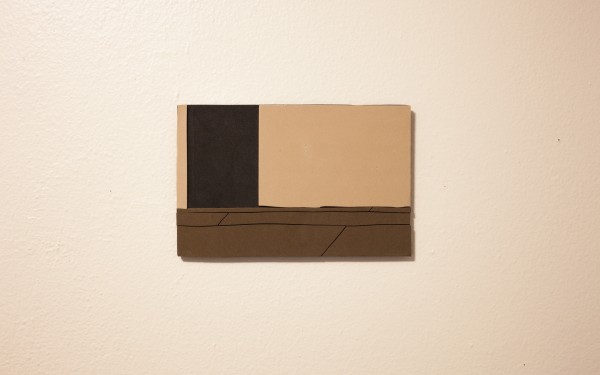 SOFA Gallery is not a large space; it’s the original apartment gallery of Austin. Its quaint feel is marked by tenant/curator Ben Ruggiero: photographer, lecturer, and Bard Alum. It makes sense that an odd smattering of Austin artist Dave Culpepper’s domestic-themed pieces, in a solo show called Central Air, should call this place home for now.

Culpepper’s work is easy-going, playful and somewhat sarcastic. The exhibition’s title, Central Air, is an example, since an old window unit cools the apartment, and he decorated this A/C with gobs of handmade duct tape. The show’s works are centered on household trompe l’oeil. It’s a task he takes almost too seriously in this exhibition. The works are mainly sculpture, with some in the child-like colors of your basic pack of Crayolas, but a few pieces are truly tricky and make for nearly invisible additions to the domestic space.

During the show’s opening I encountered a common thread of amusement among the viewers: It’s a scavenger hunt. Because it seems impossible to hold 24 individual works in SOFA’s tiny living room. The title sheet is a sort of hand-drawn treasure map, and a viewer has to put some serious focus into moving through the show in order to “find” each individual piece; the title sheet includes instructions like “look up,” and labels the actual sofa.

What strikes me most about the show is the sense that Culpepper wants you to question which things are his art, and which things are just Ruggiero’s personal objects and the usual accoutrements of his home. Some pieces are named for household objects they’re installed close to (such as a wall piece called Calendar installed near an actual calendar, which led me to mistakenly study the actual calendar for an embarrassing amount of time), or as in the case of Culpepper’s handmade Duct Tape— it’s easy to miss it, or misread it, or to dismiss it (unwittingly) entirely. Culpepper seems to enjoy his role as trickster. 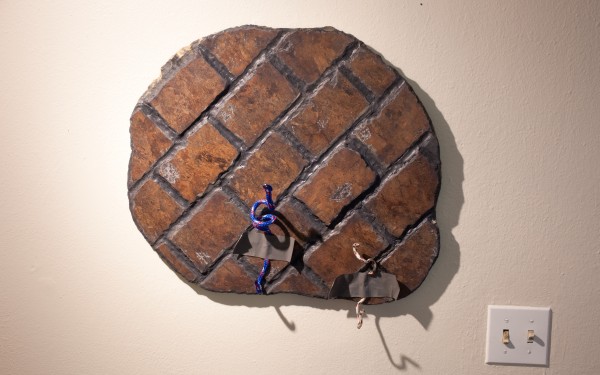 So the show is a push and pull between what is inherent to a space—especially a transitory domestic one—and what the individual inhabiting the space constructs for himself. The work Solemates is individual wooden socks, a little larger than normal socks, placed precariously around the room—under the side table, bar cart, and couch—and this work is a stand-in for elements that end up (consciously or unconsciously on the part of the inhabitant) personalizing a space. They are a signifier of life, of a specific life who eats, sleeps, and smears his humanity against the floor and wall of the box he lives in. Then there’s Crown Moulding, a black and uneven partial molding added to the top perimeter of the space; it’s a funny nod to the kind of DIY home improvement projects that end up looking unprofessional and unattractive, but like a kid’s drawing, are still proudly displayed. 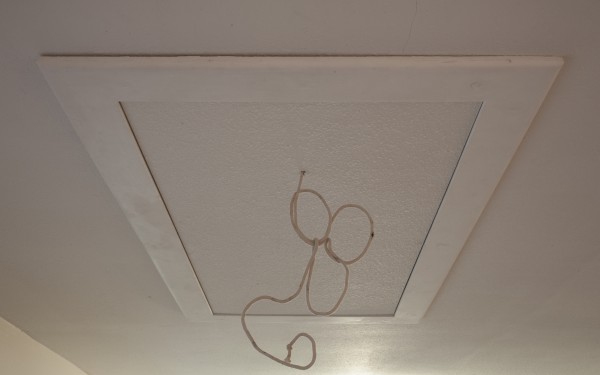 The most successful piece in the show is Attic Door, which is a strange, near-invisible installation. Culpepper has created a fake attic door on the ceiling, and it’s so easy to miss, yet it quietly manipulates the sense a viewer has about the room it’s in, and gets sort of silently filed away into one’s memory of SOFA. Culpepper’s more subtle work of manipulating memories is more compelling than his playful, painted wood objects. Though as a whole, Central Air it feels overwhelmingly appropriate for the time and place it inhabits.

“Central Air” is on view at SOFA Gallery through June 7th. Hours Sunday 4:00-6:00 or by appointment.