by David S. Rubin May 24, 2015
FacebookTwitterEmail 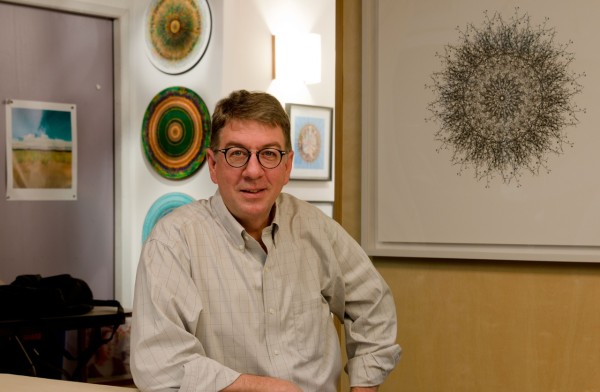 Ansen Seale in the studio

Ansen Seale has always been interested in photography. A skilled photographer in both the fine arts and commercial arenas, Seale is also an inventor. He began his fine-art photography career in the early ‘80s doing pretty much straight color photography, and in his earliest works, there’s a strong command of the modernist approach to composition which reveals his impeccable, innate eye. By the early 2000s, the San Antonio-based artist had become interested in new digital technologies, and—making his own contribution to the field—began using a camera of his own invention. A dual-mode digital camera that can produce both panoramic and slit-scan photographs, the device is shaped like a traditional camera, but the sensor only accepts light through a tiny slit and the camera has an internal motor that, when turned on, will rotate the camera. In recent years, Seale has been experimenting with this slit scan (and other forms of) digital photography, while also producing some stellar public art works. He has been exhibiting since 1981, with his most recent solos show appearing at Parchman Stremmel Gallery in San Antonio and Kirk Hopper Gallery in Dallas.

In an early photograph of a parking lot, Untitled (1989), Seale abstracted his subject, emphasizing clean lines and geometric color planes. At the same time, his focus on the scene’s underlying geometry does not obscure our reading of spatial depth, which is conveyed by the angle of the building at right and the dark shadow of street signs in the foreground. The tension that emerges in this interplay between the flat and illusory aspects of the composition is in fact what animates it. In a subsequent work, Twenty Years (1983/2003), Seale transitioned from spatial considerations to addressing issues of time. Completed in 2003, this photographic diptych consists of two photographs of the same fragment of an asphalt parking lot, taken twenty years apart. While effective as an abstraction, the composition also reveals the setting’s deterioration over time.

Seale began developing his unique camera around 1996 and finished his first prototype by 2000. In 2004 he put his new invention to use to create Reality Takes a U-Turn, which was inspired by traditional panoramic photography, where an extended image of up to 360 degrees in scope can be produced using a rotating camera. To begin this photo shoot, Seale set his camera to slit-scan mode, which means that an image only one pixel wide will be captured hundreds of times per second. Then, holding the camera still while seated in the passenger seat of a moving car, the artist traveled along a road to a certain point, where the driver made a U-turn, and then traveled along the same road in the opposite direction. When printed digitally, each sliver-sized frame captured through the slit lens is printed out in linear succession. In the resultant photograph, Seale succeeded in producing a new type of panoramic photograph which, rather than appearing stretched or curved, traces his path in a linear progression from left to right, with the point of the U-turn appearing as the nexus of the composition, lodged between pictures of both sides of the road. Because the image delineates a progression through space and time that has a beginning and end, it could be considered a “durational” photograph.

With the new camera permitting multiple options for stillness and movement, Seale next decided to make slit-scan photographs with both camera and photographer motionless, while aiming the camera at moving subjects. A perfect event for this undertaking was the 2006 incarnation of San Antonio’s annual Fiesta celebration. When digitally printing his slit-scan photographs of crowds moving through the King William Fair and floats and performers promenading in the grand parades, Seale discovered that the relationship between motion and stillness became inverted, yielding strange and striking compositions. In The Wanderers (2006), moving pedestrians appear as stick figures, suspended motionless and elongated in a manner that recalls the sculptures of Alberto Giacometti. In Astronaut (2006), an inflated figure of an astronaut has become the dominant focal point of the foreground, looking more like an alien than a human spaceman. In both, the motionless backgrounds have transformed into dynamic linear abstractions that suggest rapid sequential movement, while also bringing to mind the color field abstractions by Gene Davis and his like-minded compatriots. 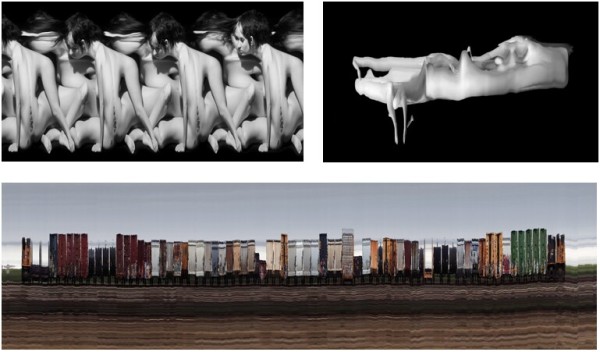 Over the past decade, Seale has directed his camera set in slit-scan mode to a number of subjects to create fresh and intriguing compositions. Continuing a dialog that preoccupied historical figures such as Muybridge and Duchamp, Seale’s Temporal Form series investigates the nude figure in movement. In Temporal Form No. 5 (Uncertainty) (2007), one of the earliest examples from the series, a photographic image that resembles an antique sculptural frieze was achieved by posing the model atop a revolving turntable.  A more recent example, Temporal Form No. 24 (2012), resulted from directing the camera in slit-scan mode towards a model rolling around on the floor. The mutant bodily form in the finished image seems a distant cousin to the famous milk splash photo from D’Arcy Thompson’s On Growth and Form, while carrying with it metaphoric overtones about human frailty and vulnerability to the effects of illness and environmental change. Another series that has produced remarkable results involves focusing the motionless camera in slit-scan mode on moving trains. In Whole Train (2013), Seale brilliantly condenses the journey of a passing train, in its entirety from front to rear, into a single image. Recalling Hiroshi Sugimoto’s time-lapse photos of entire movies projected on vintage movie screens, which end up being pictures of white light, Seale’s process produces an abbreviated form for a durational event, which in this case bears resemblance to books on a shelf. 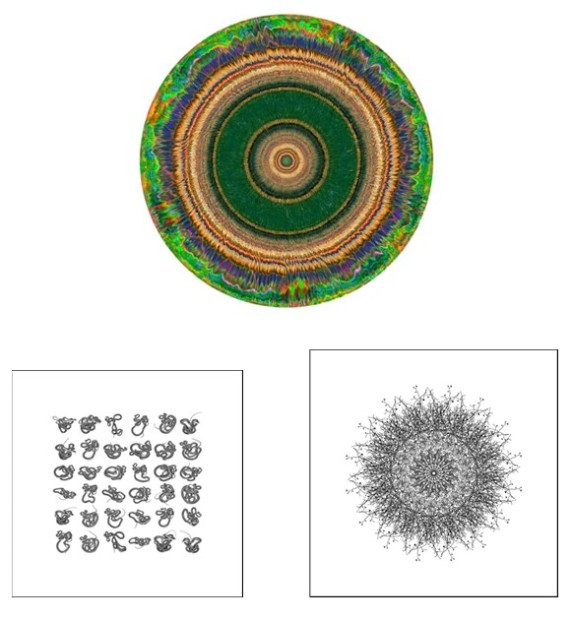 Lateral sequencing has given way to circular rotation in a number of Seale’s projects undertaken since 2012. For the Vortex series, Seale simply changed the coordinate system of his computer program from horizontal and vertical to one of degrees and radians. When printed with this adjustment, slit-scan photos of landscape transform into target configurations, replacing any references to beginning and end with the idea of continual recycling. Resembling cosmic visions as well as hybrids of the interior of a log and a Damien Hirst spin painting, these images are particularly mesmerizing, an effect that is encouraged by their being printed on clear acrylic and electrically backlit. Never one to limit himself to a single investigation, Seale has also been exploring circularity using a traditional digital camera. For his series Numbers, he has been making photographic grids in black and white that suggest some unknown forms of numerical system, alphabet, sign language, or code. Congress (2012), which simulates calligraphic writing, began as individual photographs of two mating snakes (who slither in circles), which were then digitally converted to black and white with backgrounds removed, and organized into a grid. With the new Trees in Winter series, Seale recaptures the visceral magic of the Vortex series, using his photos of leafless trees as building blocks that are simplified and replicated to become latticework compositions that bring to mind snowflakes, mandalas, or cathedral rose windows. Although each of these images begins with a time-specific reference to a season, they are beautifully transformed into transcendent icons that seem ethereal and timeless.

Seale’s forays into public art began in 2009 and include projects for San Antonio’s Land Heritage Institute, International Airport, Convention Center, Trinity University, and University Hospital. For the Convention Center’s Lila Cockrell Theater, Seale produced backlit slit-scan photos that celebrate the confluence of water and cultures in and around San Antonio. To ensure that his imagery was authentic, he kayaked to four different confluence points of creeks and rivers to shoot his durational images of water. Abandoning photography altogether for his latest public art work, You Activate This Space, Seale transformed the staff walkway at University Hospital into an interactive environment where workers moving through the passageway trigger sensors that cause backlit panels to echo their movements, producing rhythmic sequences of changing colors. A welcome healthy antidote to the pressures of working within an environment for the sick and the dying, the installation can be both calming and uplifting.

The True Polymath: A Conversation With Ansen Seale

I don’t know how David does it, but he can reveal the artists’ complicated theories and motivations as well (almost) as the artist him/herself!