by Christina Rees May 18, 2015
FacebookTwitterEmail 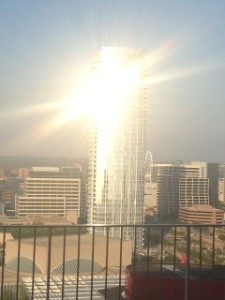 After Museum Tower in Dallas sprang up three years ago with its accompanying blinding glare– which proved detrimental to its neighboring Nasher Sculpture Center’s whole reason for being– an internationally watched feud kicked in around which party (Tower or Nasher) would be responsible for addressing the relentless burn. (Just typing this sentence takes me back into a kind of fugue state of disbelief.) But the stubborn head of the fund that developed the Tower was ousted from position last summer in a storm of controversy around his overall longterm handling of the fund, and in the meantime the Dallas Police and Fire Pension System, which still owns the building, has been exploring the idea of selling the building and also getting more serious about finding ways to reduce or end the glare on the Tower’s side.

There are might be several options on the table, and at least one of them is such new technology that more info is needed before moving ahead. But the takeaway is that the Museum Tower owners are willing to take responsibility for doing something–something–to meaningfully de-glare its glassy facade, and that it’s no longer putting the onus on the Nasher to change the design of its spectacular ocular roof or the design of Nasher’s landscaped outdoor sculpture garden.

If the conversation continues in this direction, this is progress.

please realize this makes Dallas and Glasstire look bad. In-fighting! There’s NO law suit because Museum Tower did everything in the specifications of the law! There are NO dead plants! This is ludicrous!! The museum tower is supporting widows and orphans…there is no higher calling! Further, there are no air rights in Dallas like NYC. Delete this article as there’s nothing to write about, Ariana!

I think having a death-ray aimed through the sun bafflers in the ceiling at the Nasher right at the artwork is what’s making Dallas look bad. Don’t delete this article, “Ariana”!

It will always be too tall and way ugly! But glad something may be done – I hope it works.

I heard that the Museum Tower is going to be retrofitted with thousands of laser pointers, all facing outward. So, you know, the widows and orphans can have a second chance . . .