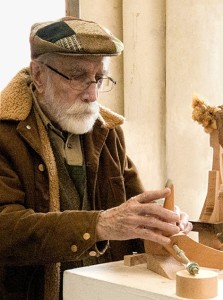 “Some of my best friends are trees,” muses 92 year-old Phil Evett, standing on a windswept mesa at his home on the outskirts of Blanco. Though he worked long ago in stone, clay, plastic, steel, and iron, for the last half-century, the wood from maple, cedar, mahogany, oak, and other species has been his primary medium, transformed into sculpture as varied and surprising as the twists of branches and limbs crafted by nature herself.

The exhibition, Philip John Evett: Sculpture and Drawings, 1974-2014, is on view at Hunt Gallery in San Antonio through April 30. The late Donald S. Vogel, founder of Valley House Gallery in Dallas, described Evett’s “anthropomorphic forms” as resembling “strange mannequins” that appear “almost joyous,” exuding “some unfathomable charm.” A swimlike abstraction in the show, titled Spirit of the Kendal Fish, is named for the boat that brought the artist to Texas from his native England in 1954. In a video of a 2011 Blue Star lecture, Evett spoke of early influences in his homeland, noting that his father’s face proved instructive. The elder Evett, an industrial chemist, had lost an eye and suffered disfigurement of one side of his face in a nitroglycerin accident. The artist also recalled that amputees were a common sight in England in the days after World War I. Presences and absences in many of his works seem to suggest phantom limbs or branches. 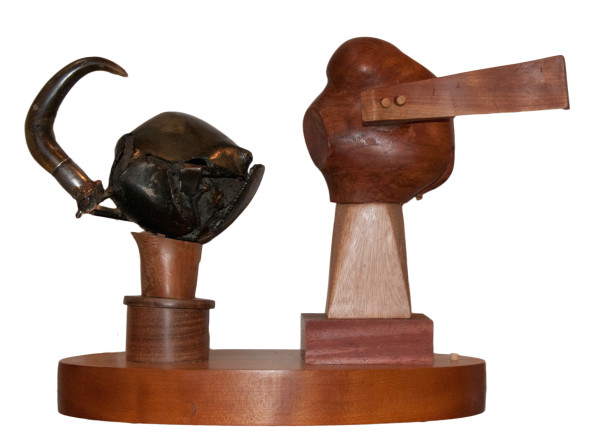 Born in 1923 at Swanscombe, Kent, England and educated at Cambridge College of Art and Belfast College of Art, Evett was a Royal Air Force flying officer in World War II and served as a radio operator-air gunner. After the war, he restored bombed churches and carved war memorials at university chapels in Cambridge. At Westminster Houses of Parliament, the young artist helped repair a sculpted Prussian eagle that had been hit by a 500-pound German bomb.

By 1954, living in a boat on the River Cam, Evett was feeling restless. “I had befriended Dick Underwood, assistant director of the University of Texas Press, who had been in England studying the printer’s art,” Evett recalls. “And Dick wrote to me and said, ‘Well, why the hell don’t you come over here? I’ll be your sponsor.’”

A Brit-in-exile ever since, Evett says he loved Texas immediately. Settling first in Austin, he was asked to create a portrait bust of Sam Houston for the publication of Llerena Friend’s 1954 book, Sam Houston—The Great Designer.

The writer and folklorist J. Frank Dobie also sat for a portrait, delighting the young Englishman with his tall Texas tales. “He taught me a lot about life,” the artist recalls. “He taught me to savor the moment.” During a visit at Dobie’s Paisano Ranch, Evett asked if Dobie felt lonely out there by himself. “Oh no, Phil,” Dobie replied. “At my age, I like the workings of my own mind.” Some 60 years later, those words continue to inspire Evett as he works in his Blanco County studio. (Evett’s Dobie bust is on permanent display in the research room of The Wittliff Collections at Texas State University in San Marcos.) Evett’s artistic circle also included sculptor Charles Umlauf and the Texas muralist, sculptor, architect, and inventor Buck Winn.

The Spirit of the Kendal Fish , maple

In 1956, the expatriate had his first solo exhibition at Laguna Gloria Art Museum in Austin. “Philip John Evett’s Work Shows Vigor at Laguna,” read the headline of the Austin American-Statesman review. The following year, the artist moved to San Antonio, where he taught at the San Antonio Art Institute and worked in a studio at La Villita Historic Arts Village. In 1960, he began teaching at Trinity University, retiring in 1987 as a professor emeritus.

I’m just guessing, but I think people who linger on the planet longer than many of their peers must at times of random musing think, perhaps with a small giggle, “Well. How the heck did this happen?”

Phil Evett has a charming, easy sense of humor that extends to the subject of aging. At a 2010 Trinity University ceremony for the installation of his sculpture of the head of the late Trinity president James Laurie in his namesake Laurie Auditorium, Evett looked out at the snowy-haired assembly and cracked, “Oh, for a moment there I actually thought I had died.”

Beautifully written profile, Gene! Thx for introducing me to this artist.