State of Museums: The Pop-In and Trip-To of The Contemporary Austin 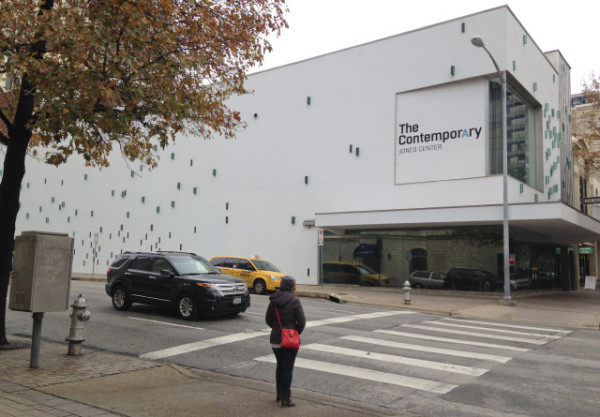 One hundred seventy-seven green glass blocks stud the bright white exterior of the Contemporary Austin’s Jones Center. The blocks, which let in light during the day and then glow at night like an encrypted message to extraterrestrial life, are the kind of detail that makes you giddy and grateful for architecture. Form follows function, sure, but you want to stand near them and let them work on you. Improve you, somehow.

I cozied up to the wall of the three-story building along 7th Street and pointed my Instagram-primed iPhone up at the blocks, tilting back to find a good angle. And I kept tilting until the espresso I forgot I was holding popped its lid and dumped all over my face and collar and soaked through the straps of my backpack. Though the Contemporary Austin is located in the heart of Downtown, it was a Sunday morning, and I don’t think anyone saw. At least I didn’t hear anyone laugh. I patted my face dry, waited a moment, and then turned the corner to enter the space.

I blame you for this, Lewis.Tsurumaki.Lewis. You owe me a new backpack! 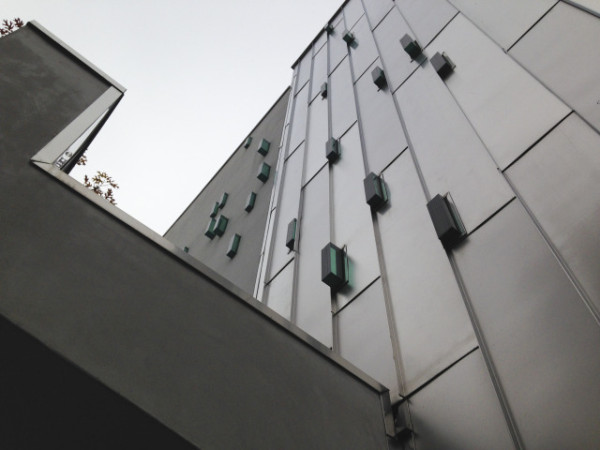 This was the first project in Texas that the New York City-based firm had worked on. The three-story brick building, about 20,830 square feet, has stood on the corner of 7th and Congress since the 1850s. It was a drug store in the 1870s. It became the Queen Theater in 1926. In 1956, Lerner Shops, a department store, moved in, opening up the second story and adding the Congress-facing windows and an awning over the sidewalk. The Contemporary Austin (neé the Texas Fine Arts Association, then Arthouse, then AMOA/Arthouse) bought the building and moved in in 1995 — but, as Thomas de Monchaux writes in a review, “essentially sealed off two-thirds of the building that were not up to code.”

The Lewis.Tsurumaki.Lewis renovation opened in 2010. The firm tripled the amount of usable space. The first floor now has a glass-encased lobby that works as a storefront, inviting not window shopping, as it were, but window gazing. A polished wood staircase — the bottom step of which stretches into the lobby to double as the reception desk — leads to the cavernous, column-free second floor gallery; as the Jones Center has no permanent collection, a 16,000-pound movable wall can be configured as needed. The firm also added a 5,000-square-foot deck on the roof, where films can be screened, parties thrown, and views of the Texas Capitol and Downtown beheld. As I made my way through the space, I overheard a man tell his young son: “This is good, since you’re studying architecture.” 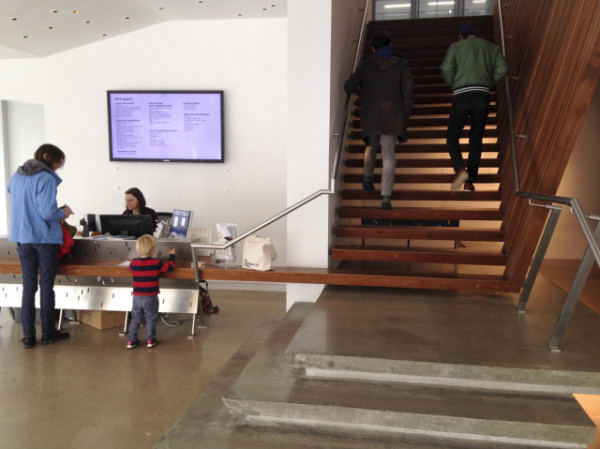 Lobby and staircase and stairdesk

On the day I visited, I saw an installation by Do Ho Suh. An astonishingly painstaking reproduction of New York City apartments made out of diaphanous polyester the color of cotton candy invited you to wander through, as though touring an open house (or, maybe, a post-apocalyptic squatter’s shelter). Smoke alarms, radiators, light switches, doorknobs, fuseboxes, toilets, even city inspection and occupancy forms were fashioned out of fabric and thread. 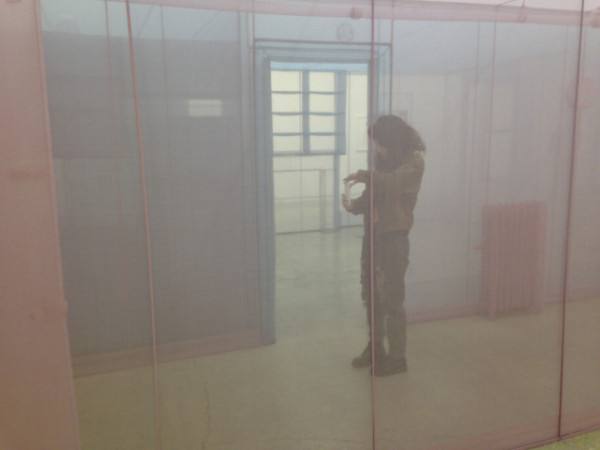 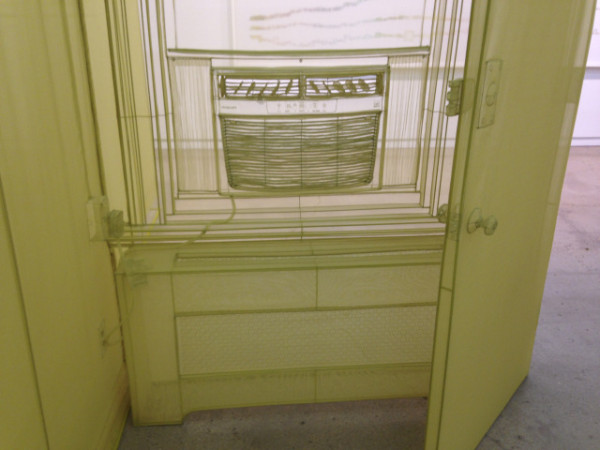 If the Jones Center provides pleasures of the urban kind, with its glass and exposed brick, with its walkability to and from, say, coffee shops (and bars and courthouses and offices and hotels and condos), its country counterpart the Laguna Gloria removes visitors from that pace of life and returns them to the simple idyll of solitude. The Contemporary Austin’s exhibitions span both spaces. Admission to one gets you in free to the other. The Laguna Gloria, the former estate of Clara Driscoll, is just a few miles north of Downtown and right on the Colorado River.
Rear of Laguna Gloria. 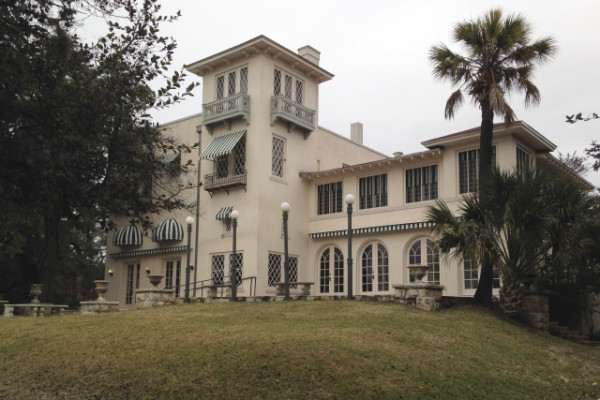 Two spaces couldn’t be more different, of course. The former villa, with a tile roof and green candy-stripe canvas awnings, is used to show exhibitions and house offices. (Also on the grounds are a few buildings for the Contemporary Austin’s workshops and residency programs.) The villa is surrounded by quiet acres of paths that curl through woods and take you around a garden of contemporary sculpture. 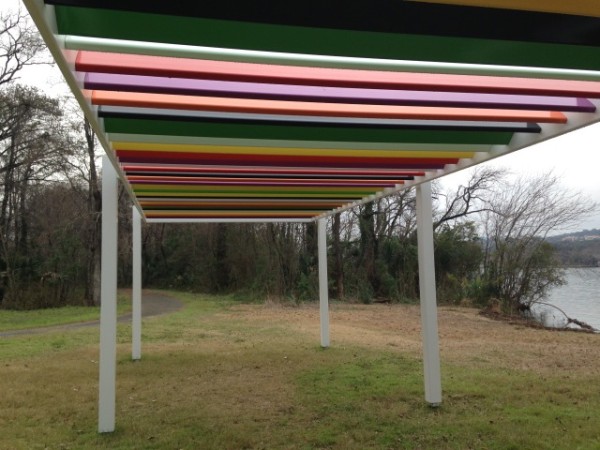 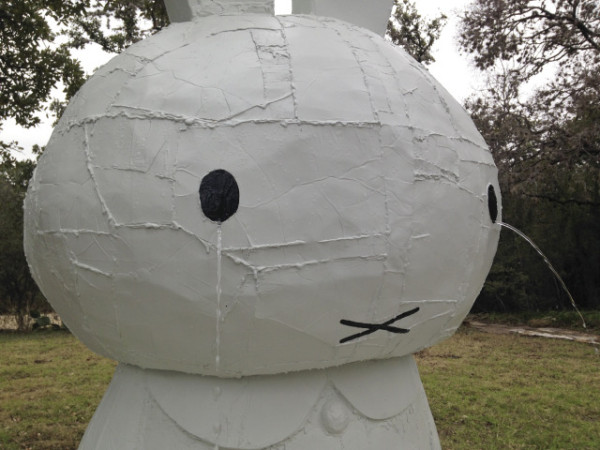 Visiting both on the same day suggests two ways of thinking about how we experience art in cities. The Jones Center encourages the spontaneous pop-in; Laguna Gloria the deliberate trip-to. One makes up part of the routine of your comings and goings. The other requires that you make a plan to go. My shoes touched the polished concrete floors of the Jones Center and the squelchy lakeside mud at Laguna Gloria. Both are good. At the Jones Center I was able to come into close contact with the haircuts and ironic mom jeans of the local hipster population. At Laguna Gloria I was able to listen closely to birdsong, hear the lap of the lake onto the shore, even the trumpet of peacocks from the Mayfield Nature Preserve. 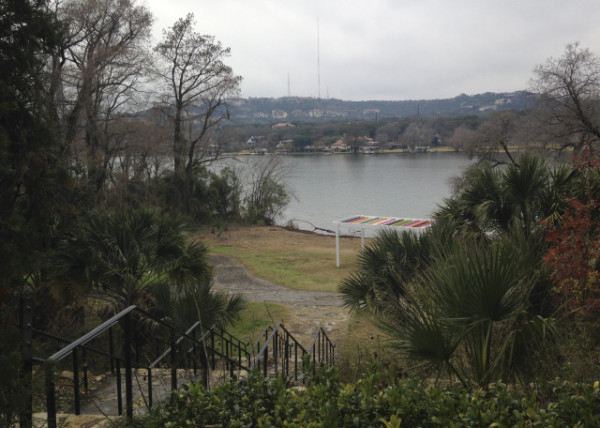