Bill Davenport to step down as editor of Glasstire 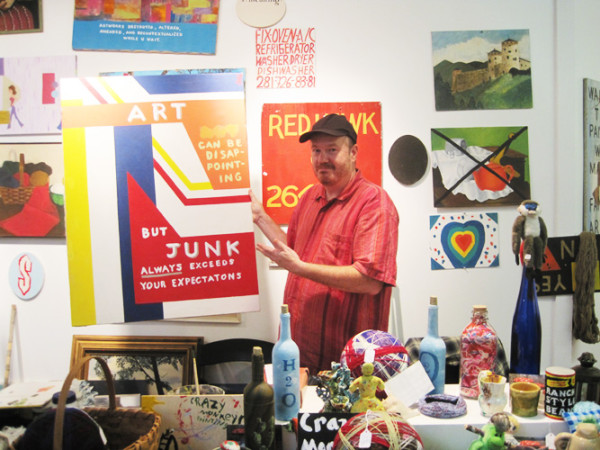 Today Bill Davenport announced that he will be stepping down as Editor-in-Chief of Glasstire at the end of April to focus on his work as an artist. A longtime fixture of the Houston art scene, both as an artist and a writer, Bill has served at the helm of Glasstire for the past two years.

Founder Rainey Knudson said, “When Bill became Editor-in-Chief in 2013, I asked him to stop working as an artist, which he did. It was an enormous sacrifice, and I will always be grateful to him for that. Bill enthusiastically stepped into the role and brought his energy and iconoclastic vision to the site. Over the past two years under his leadership, our absolute unique visitors increased 60 percent, we’ve strengthened our editorial staff and introduced new features like our Top 5 video series.”

Davenport was Glasstire’s first writer, contributing a weekly column titled “Tire Iron” in 2001-2002, and later serving as News Editor from 2007 to 2013. “Bill has been with Glasstire since the very beginning and has helped build the site. He will continue to contribute to Glasstire in the future, which I’m very pleased about,” said Knudson.

In the coming months, the Glasstire staff will be retooling the site’s design and adding new contributors to our content. Knudson (who founded Glasstire in 2001 and who has focused on the administrative side of the organization since 2004) will step into an actively editorial role for the first time in a decade, to guide Glasstire through the redesign and editorial transition.

“For decades, Bill Davenport has been a vital presence in the Houston art community. His independence and artistic vision have helped strengthen Glasstire in the two years he’s served as Editor-in-Chief,” said Glasstire’s board president Julie Kinzelman. “This transition will begin a new chapter for Glasstire, as we look to the launch of our new speaker series this fall, and as Rainey returns to editorial work.”

Best of luck, Bill! Thanks for your work on Glasstire!

Thanks for all you have done Bill

Thanks for your major contributions to keeping Glasstire great! I’ve enjoyed your work since seeing you hang a foil Enterprise sculpture at G/BAC and can’t wait to see what’s new from your studio.

Who’s gonna piss people off now!?
Glad to hear we will be seeing more art from Bill, I’ve been a fan since the 90s.

Great job, Bill, and looking forward to seeing your work. But, keep up the acerbic and right-on comments from time to time.

ew why would you ask him to stop his work as an artist?

Conflict of interest. You can’t have the editor of an art website trying to publish an honest review of a space where they themselves are showing, or might show. (The job is also too demanding to allow someone to take time off to prepare for an exhibition.) But that said, many of our best writers are also artists.

Going to miss you here, Bill. But excited to see what you do next. A long time fan am I — you were the first artist I chose for a Sala Diaz show.

Changing of the guards all around the city. The perfect opportunity for radical young gonzo writers. 0_o

I would hate to think that Bill’s departure as editor has anything to do with his coverage of HAA or that he has a point of view some people disagree with.

It doesn’t, and he probably does. But doesn’t everybody?

Sure, everybody does. Bill just … well, it’s the acid that makes the margarita, if you know what I mean.

Bill did good by Glasstire. But glad to see him heading back to the studio.

Very sad to see you go, Bill; but can’t wait to see what you bring us as an artist.

Bill,
You will be missed! Glad you are getting back into the studio though. Best of luck!

Bill, you’ve been great. Now get back to the junk yard!

Bill – we have really enjoyed your reviews here in deep Southeast Texas. (you might even have a cult following…) We will miss your input to Glasstire, but we are excited to see what will come out of your studio. Your verbal creative energy will transfer to visual creative energy. It’s all good.

Wait a minute … you’re not about to tell us he went to a farm upstate so he can frolic and play with the other artists in the fresh air? *sniffle*

Now who is going to kiss the ass of shitty artists and ignore decent ones?

If you have a particular gripe with Bill, you’d best make your case by being more specific. This comment doesn’t do you any favors because it’s so patently untrue.

Da Ramses — what baseless nonsense. Christina Rees is offering you the opportunity to support what you’ve said, but you won’t be able to.