The Companionable Resurrection of Frank Wick and SOFA Gallery

Upon entering the apartment-based SOFA Gallery, viewers find what at first glance seems like a series of small paintings rooted in many of the tired artistic thrusts that dominate the fringes of contemporary painting in Austin (and arguably far beyond). I’m thinking of a sort of lazy unironic casualism, a flaunted lack of craft, perhaps a frustrated naïveté — a practice of making art aggressively without aim, and intentionally without context. What I’m describing is not an attempt to tap into some Debuffetian purity or innocence; it’s as though the point is to try and make people feel disappointed in the work, or even hate it, or perhaps to cause closer associates to feel better than the average viewer through their tolerance of their friend’s nonchalant musings.

But instead artist Frank Wick has taken these peculiar, disheartening trends and used them as a foundation to build something much more interesting, though still jarring and uncomfortable. In these warped and wrinkled paintings atop pages sliced from magazines, Wick uses this downtrodden aura to plow through the obstacles of art making and explore the negative energies surrounding personal defeats, feelings of uselessness, half-hearted escapism through imagery and consumerism, and, strangely, the beauty that can be found in those dark places.

These works range from faux-naïve to Goya-esque in their mark making. The artist never wants anything to be too perfect. With short-bristled, rough brushes and paint he intentionally undoes balances and harmonies in the images underneath; though he can’t completely escape his years of education and experience. Some marks made are undeniably informed, descriptive, and calligraphic. 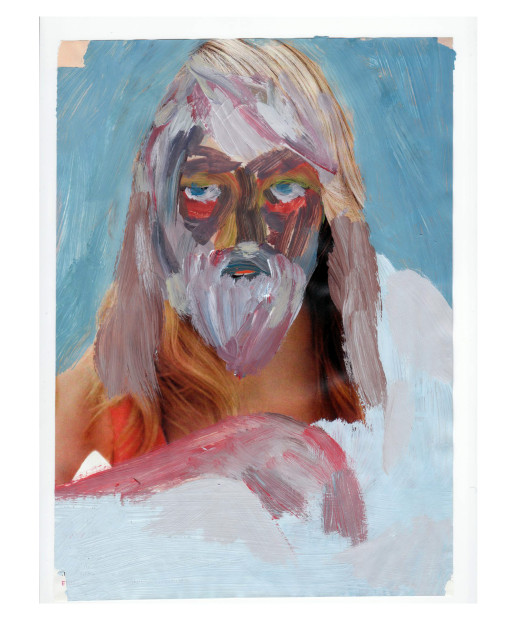 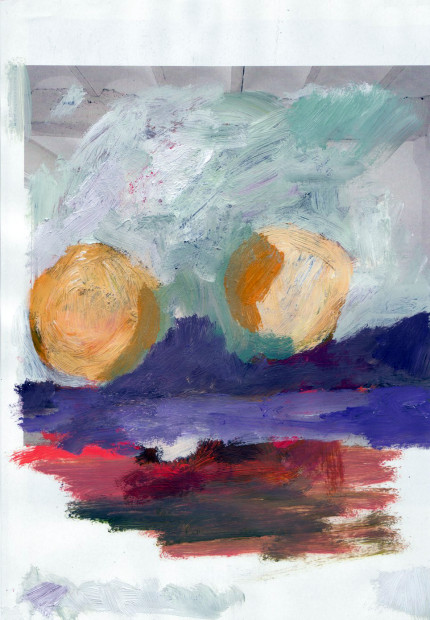 Wick, formerly a sculptor, arts instructor, and museum worker in Miami and later Oklahoma, is re-entering an arts practice after significant time away, and is doing so through explorations in paint, which is well outside his earlier speciality. SOFA Gallery as well has recently re-entered the scene after several months out of it; it’s now under the direction of Ben Ruggiero. Together, SOFA Gallery, Ruggiero, Wick, and this exhibition embody the hope and the drawbacks of contemporary art in Austin.

Many are probably tired of hearing people say Austin is in a precarious (but always hopeful!)  place in terms of contemporary art. Most agree it’s got a lot of potential, all the right pieces of the puzzle, but things aren’t yet in place to provide artists with sustainable opportunity for exposure and growth. Galleries open and shutter with frightening speed, and emerging artists, curators, and critics burn out like match heads before fleeing to larger metropolises where there are more resources for the arts. SOFA Gallery, though, was one that closed of more natural causes. Its founder, Katie Geha, accepted the directorship of the Lamar Dodd Art Gallery in Athens, Georgia after obtaining her PhD at UT. The space has been reopened by Ruggiero, a member of Lakes Were Rivers collective and a Bard-trained curator.

Katie Geha used the apartment-based SOFA Gallery to show frequently unresolved work that still seemed deserving of exposure. “I always appreciated the dialogue and intimacy of apartment salons and in particular SOFA,” says Ruggiero. “I was very happy to continue this effort.” With Geha’s blessing Ruggiero reopened the gallery to continue showing work from artists that he felt were underserved by the current state of things— artists whose work he wanted to see, but that one might not expect to see.

Frank Wick is one such artist. He and his wife Liz Rodda (who recently had a solo show at David Shelton Gallery in Houston), weighing the low level of discourse and opportunity for artists in Oklahoma, began seeking employment in more metropolitan areas. Rodda received an offer from Texas State in San Marcos — close enough to Austin. The couple packed their bags and moved in 2012.

During this time Wick was undergoing an artistic crisis. He describes himself as being of the generation of artists trained in the old business model: artists make work, curators and critics make sense of it, dealers and galleries catalog and sell it, individuals and museums collect it. With that model’s collapse Wick was now facing, like many artists, the demand for multitasking. Roughly corresponding to his move to Austin, Wick ceased his practice to try and relieve some of the pressure. He shut down his website and turned inwards. 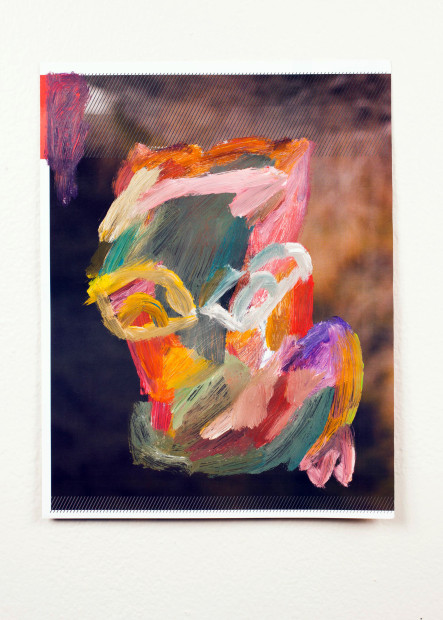 Wick searched for employment in Austin and came up empty. The unwanted free time and fruitless introspection was interrupted briefly by a few months behind a mop as a custodian for the city, which only exacerbated his depression. Two years after arriving in Austin Wick was hired as registrar of the small Elisabet Ney Museum, and six months after that uptick he found it in himself to attend therapy. Finally and without any suggestion from the therapy group to do so, Frank again began making art.

In the meantime, Katie Geha had closed SOFA which sat dormant for several months. If the last two exhibitions are any indication, it seems Ruggiero is continuing Geha’s remit by exhibiting risky works with unresolved potential in a stripped-down presentation. At SOFA, you aren’t likely to see a vinyl curator’s statement stuck to the wall, or anything more than the house letters S-O-F-A on the door to let you know where you are. When Ruggiero became aware of Wick’s new work, he found resonance in it and offered Wick an exhibition. Wick handed over stacks of quickly rendered paintings on paper, and gave significant control over to Ruggiero to hang what he liked. 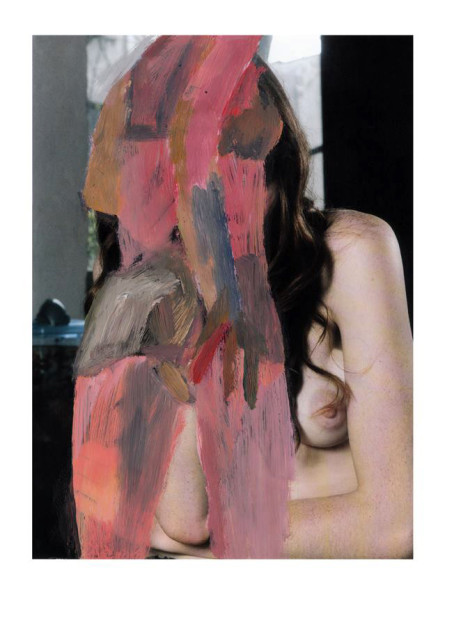 Of this recent work, Wick says, “I think sometimes it’s important to fight sentimentality. It is so manipulative. There is nothing wrong with sincerity though. I am cool with sincerity… . I don’t know why, but I feel a kind of necessity to make things that are beyond acceptance, that are a little bit offensive. But these things seem so unoffensive given the larger context of the world.”

Wick’s paintings range in subject, but there are certain threads that conjure a theme of self-loathing and begrudged idleness of years without work (or making work). Looking through these paintings, one not only feels pity for many of the subjects, but self-pity, too, and self-disgust for continuing to oblige some unspoken request to keep looking. Many of the works are highly suggestive or outright pornographic, but far removed from sexual attraction: silhouetted figures in putrid purples and greens spread open their thighs and look down at their own confused genitals. Others are twisted in other ways: a cracked-out cartoon mouse in front of a hazy, roughed-in figure whose on-canvas color mixing still feels deft. 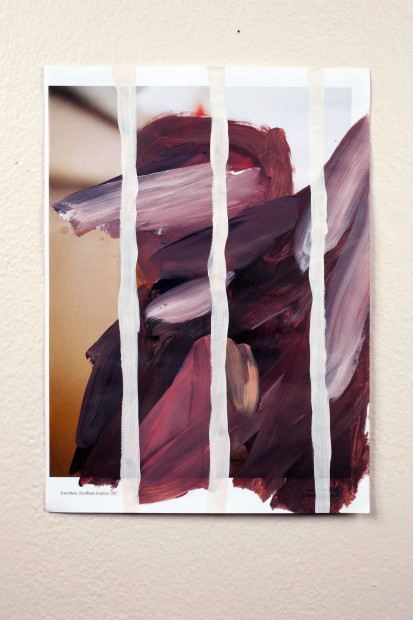 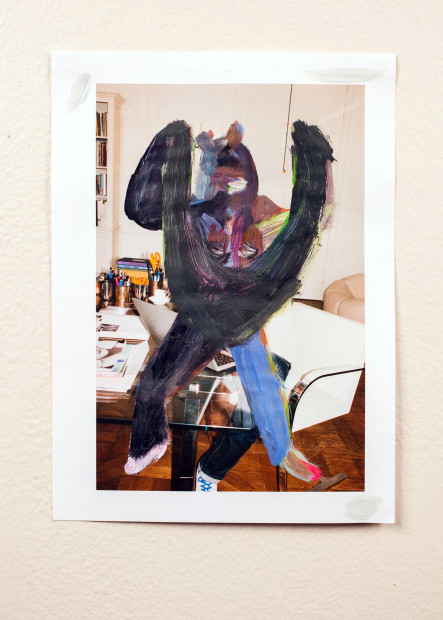 These are counterpoints to Wick’s calmer but equally powerful works. It’s as though the uncomfortable images act as some sort of grotesque, baroque frame surrounding an otherwise peaceful scene. These calmer works generally interact or build off of the images harvested from magazines: a vase of flowers made more vibrant through paint but retaining its photographic cast shadow; a figure whose weighty printed knees lend an anchor to its abstracted form; an ornate golden French interior inhabited by an anonymous, thickly-applied character and her dog. Many of these present opulence; perhaps it’s Wick’s past work as a sculptor, but when he chooses to work with space, even illusory space, his expertise is apparent. Through that expertise these paintings present resting points in the psychopathic sea of crudeness. They acknowledge the possibility of prosperity, or at least the brief moments of beauty within (and as a reprieve from) the continual slog of an image-saturated present. 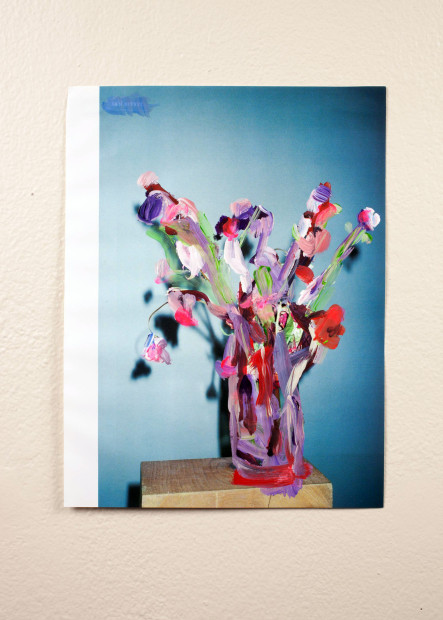 If this is both Frank Wick and SOFA Gallery feeling out a new practice and a new depth of curation—a way of responding to less-than-optimal conditions in this city and in this era—I wait with great anticipation to see what both do next. Until then I remain warmly disgusted, and more than a bit moved.

MADE IN THE MOMENT: “PULP” at Jonathan Hopson...