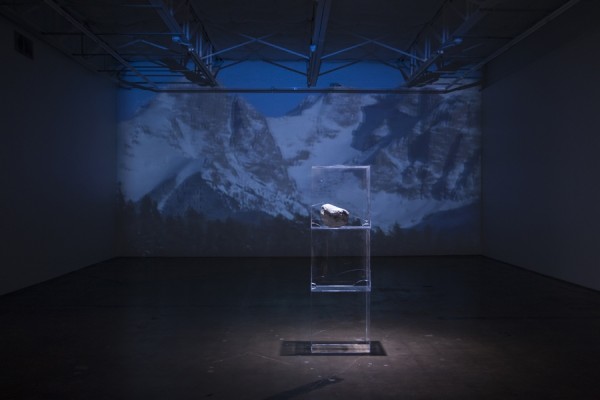 Jeff Gibbons’ “Auto Relativity Kinetotron” is a minimalist installation dominated by the digital projection of a mountain range; it shakes as faltering camera work induces mild vertigo in the viewer. Completely filling the back wall of the front gallery at the Goss-Michael Foundation in Dallas, the scale of the wobbling mountains overwhelms the space, and centered in the room is a stack of cracked Plexiglass vitrines spotlighted from above and containing a single object: a bedsheet wrapped in clay. Appearing as a meteor or alien artifact, the object is dubiously protected by rupturing vitrines while the trembling mountain in the background implies impending trauma. 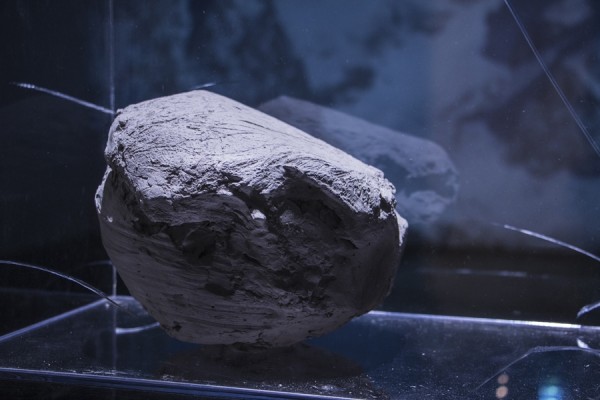 Gibbons’ statement for the exhibit references quantum theory’s universal connection of all things, and the ability to measure the weight of a mountain by observing its gravity. In this case the gravity of the wrapped artifact is necessarily related to that of the mountain, as the clay that wraps the bedsheet is the flesh of the mountain. The bedsheet, a comforting substrate, seems to reference the body in its passive state. It doesn’t require intellect; it’s indelibly bound to nature.

This space feels like science fiction. It feels carefully pared down in order to link complex ideas to a mystery. It contains an overlapping series of narratives involving the small, the fragmentary— the body of the individual, the dreamer—linked to the body of the massive mountain, whose majesty has been quantified and circles back around to the quaking need to reconnect; each form influences the other. The whole arrangement hovers on a precipice of presenting enough related information from which plausible scenarios may be constructed, but without actually connecting dots and illustrating points. The meaning comes through and the mystery remains intact.

(This theme carries on in Jesse Morgan Barnett’s show up the hall—this is two solo shows running simultaneously; we’ll approach it in a moment. Together the two shows seem to constitute a kind of zeitgeist.) 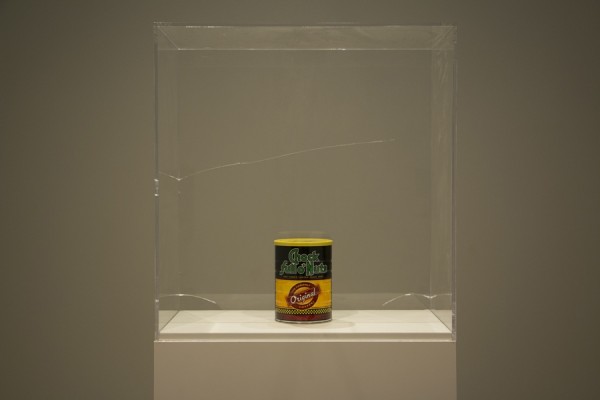 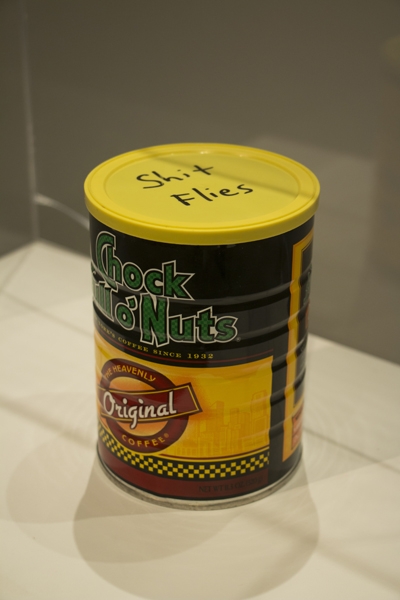 The second part of Gibbons’ exhibit, located in a side room, has little relation to the other work. Though again, a central item is sealed in a cracked vitrine: a familiar “Chock full o’Nuts” coffee can with ‘Shit Flies’ written on the lid. It’s evocative: Piero Manzoni’s canned artist shit, Damien Hirst’s dead-fly paintings, Delvoye’s “Cloaca,” and Matthew Barney’s “River of Fundament” jostle for comparison. But this is in fact a found object, not a snarky artist’s commentary on turning shit to gold or commodified consumption cycles. This collection was created by someone picking flies from feces for their own reasons—or more likely without reason—simply an action of desperate apathy or base boredom never intended to be reflected upon or analyzed. It’s disgustingly humorous on one level, but as a found object from outside the art world it acts as a mirror to art’s manufactured attempts to out-debase reality. Additionally, within the walls of the GMF and relating to the over-financed shock value of the Young British Artists in its collection, the work embodies a particular subversion that would be lacking pique in a smaller, more alternative venue. 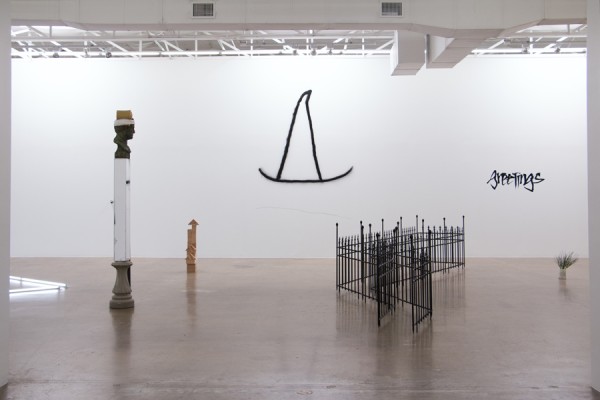 Upon entering Barnett’s “Personal Life” at the top of the ramp, one finds a field of non sequiturs. Black and white photos and nearly vacant canvases surround found object totems and other seemingly random items. Even with bold commincators in the room, such as “Constellation Proposal,” fluorescent lights in the shape of the big dipper laid on the floor, Barnett seems to subdue the blatant seductive power of the piece by grounding it and presenting it as a tentative “proposal” that can merely hint at the size and timelessness of the cosmic Big Dipper. 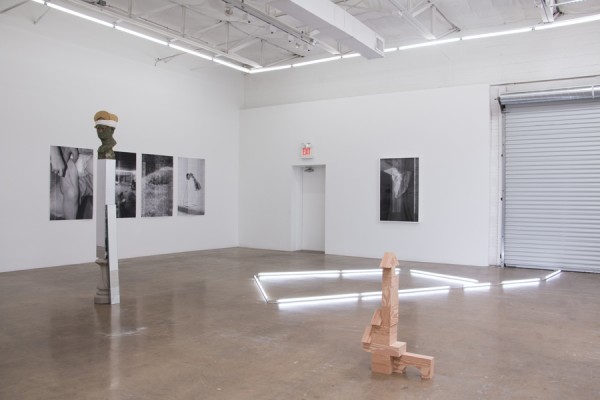 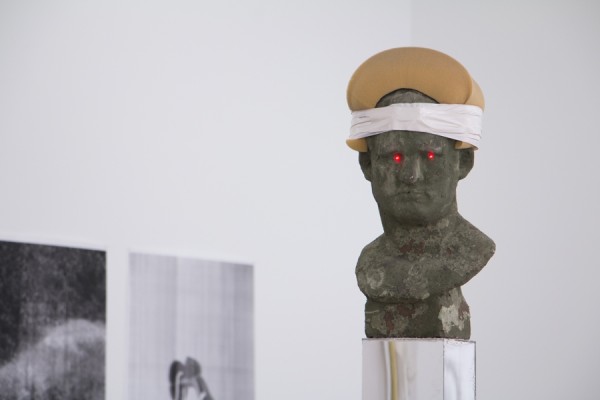 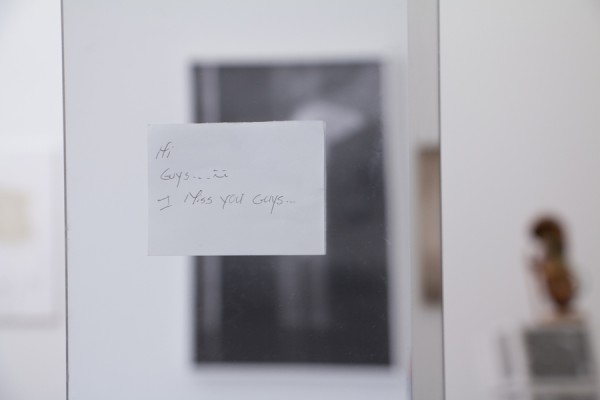 In “Hi Guys I Miss You Guys” delicate mirrors form a tall pedestal to lift a glaring patrician bust above us. When properly aligned, the reflected viewer becomes an active supporter of the authoritarian symbol, yet the silly foam helmet strapped to its head undercuts hegemonic political fears while a cute, bubbly note taped on one side of the pedestal lends a humanizing charm. These “moves” to appropriate found objects and realign their language has some similarity to Groys “zero sum objects,” a hallmark of post-modern contemporary work which avoids championing any specific ideology so that art remains open to embody multiple truths, often cautiously removing as much context as possible until the object/intent become nearly indecipherable. 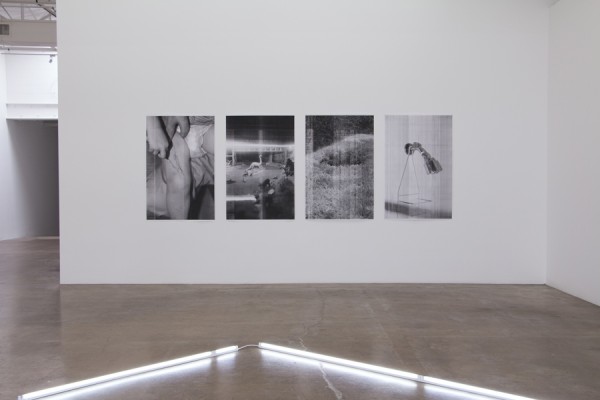 This type of editing is familiar to Barnett, who has a background in highly saturated photography and who often sifts through a multitude of images in search of something almost undefinable or intangible. Perhaps we can call it a poetic essence, one that avoids cliché and reveals empathic qualities. This process of “capturing” objects for a certain resonance outside of their obvious materiality or supposed purpose can be seen in his Xeroxed photos push-pinned to the wall. Instead of resulting in lush, seductive images, the works’ cheaper process shifts the focus from the desirability of the object itself to their content: a pair of legs doodled upon by a child, a domestic shower, and a set of toy dinosaurs. A single, nicely framed Xerox image on another wall parodies the desire to dress up the images while allowing the possibility of swapping the image in the frame for one of the others, as a means to continually shift the locus of importance or value. 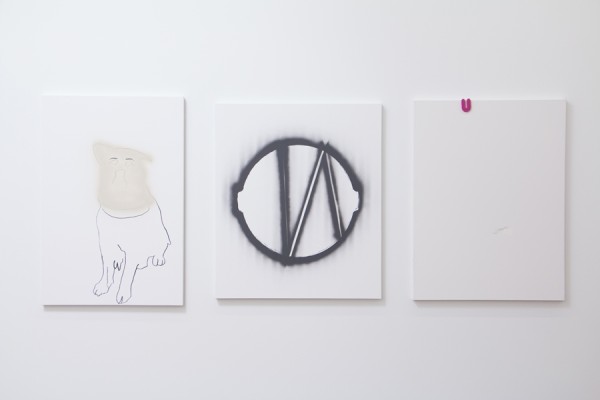 On the opposite side of the space a set of barely touched canvases show a dog with visible fake eyelashes but whose head has otherwise been painted over; a stenciled spray painting; and a set of toenail clippings along with a chunk of chewed foam. Though disparate visually, they present a set of mundane actions that are here held up as significant, worthy to be recorded and exhibited. Displaying these specific items as special is a playful realignment of value. Barnett continues by adorning a large canvas with a small macramé tiger, and also perching a wooden garden gnome on a tilting stack of trashed A/C units in the middle of the room. 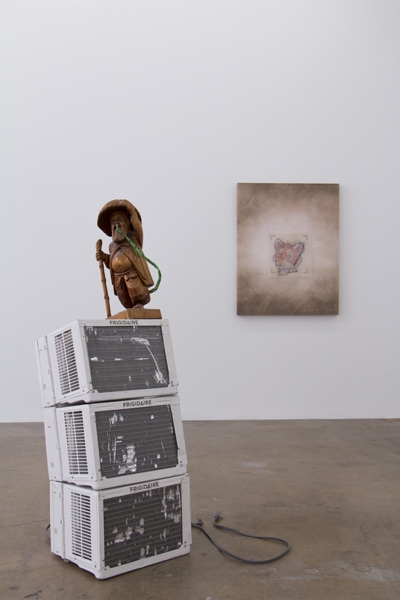 The pieces resist over-intellectualized attempts to wring intent from them while still implying a personal narrative. (Whose toenail clippings are those? And who wrote that note?) The difficulty in a time when an artist can point at anything and it becomes “art” is that the artist is now the curator needing to selectively point. At times the exhibition may be pointing too often, overloading the humble poetics of one piece with the materiality of another through proximity as the exhibit shifts into an installation. But these tenuous connections also reaffirm eccentric meandering, a kind of flânerie, as a valuable process of knowing beyond intellectual narration.

Jeff Gibbons and Jesse Morgan Barnett on view at the Goss-Michael Foundation through March 10.