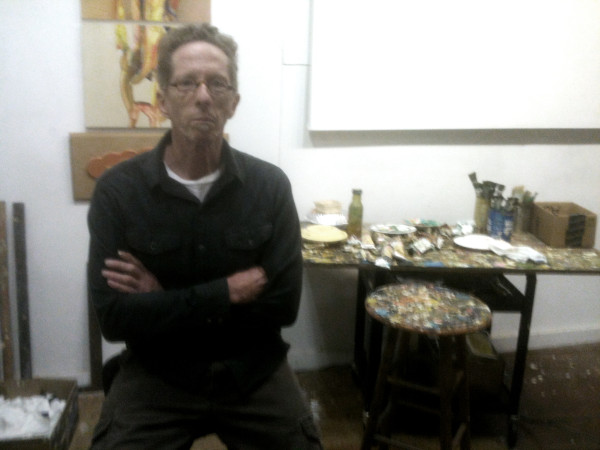 James Cobb in his studio

With more than twenty-five solo exhibitions under his belt and a new one opening at San Antonio’s Sala Diaz on March 6, James Cobb has proven himself particularly adept at mastering several mediums, including painting, drawing, digital media, and music. Originally from the San Diego area and raised in St. Louis, Cobb moved to San Antonio in the early 1980s and fell in love with the city’s congenial cultural community. During that period, he was actively involved in the global mail art movement, and participated in the genre’s underground scene using the pseudonyms Nunzio Mifune and The Six-Fingers Club. He also produced his own zine, The Mambo Press Update, as well as alternative music tapes under the name of Six-Fing Thing. Cobb’s emergence as a painter occurred in 1986 with his first solo exhibition in San Antonio, held at the now-defunct Ephrussi Gallery. Since that time, Cobb has amassed an impressive body of paintings and, more recently, he has embraced digital technology with a passion.

Cobb taught himself to paint in oils while studying art books checked out from the library, and his earliest paintings reflect the influence of early 20th-century German Expressionists such as Ernst Ludwig Kirchner and Otto Dix. In works such as Damn Fools (1986) and Ship of Fools (1990), Cobb employed a German Expressionist style of contorted figures, sharp angles, and jarring colors to examine German Expressionist themes of human folly and debauchery. In the triptych Damn Fools, a central panel of a couple engaged in a gluttonous meal is flanked by a disturbed man who stands before a crucifixion and a dancehall performer and seductress who flirts erotically onstage. Such themes, of course, can also be found in films of the 1960s and ’70s, such as “Tom Jones” (1963), “Ship of Fools” (1965), and “Cabaret” (1972). 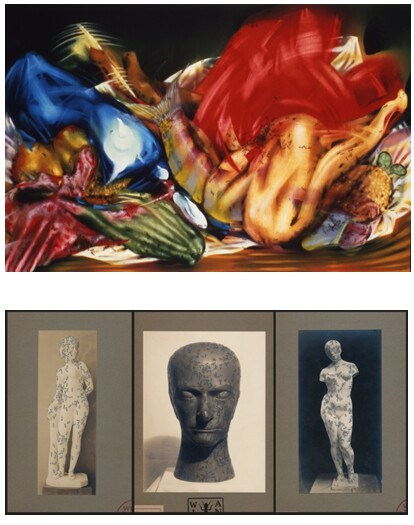 By 1990, Cobb had begun to explore subjects that have held his interest throughout his career, especially insects and tattoos. Using as its point of departure the traditional vanitas still-life painting, Cobb’s Perishables 2 (1990) reflects his belief that “things are never what they appear to be, and that all matter is an illusion.” In this painting, Cobb presents an invented still life consisting of a chicken drumstick, fish and fish bones, and vegetables, all topped with large globs of brightly colored gelatin. While from a distance the edibles appear inviting, closer inspection reveals that they are covered with crawling ants; what we think we see at first is not really what we get.  In a 2012 exhibition at San Antonio’s Fl!ght gallery, Cobb returned to depicting swarms of ants, this time with a humorous twist. Presented salon style, the body of work was composed of fine art reproductions, thrift store paintings, clown paintings, and earlier works by the artist over which he drew the parading ants by hand.

Cobb’s interest in tattoo culture dates to the early 1980s, when he got his first tattoo. For Cobb, incorporating tattoo imagery into an artwork is a favorite device for layering visual information and expanding meaning. In 1996, he took advantage of such possibilities in his Catfish Heads on a Fence series, which originated after he noticed the recurrence of dead catfish heads appearing like trophies on a fence near a house in the countryside. Considering himself something of a cultural anthropologist, Cobb began painting the image, but embellished it by adding elaborate tattoo patterns to each fish’s skin and bathing it in golden light. Placed centrally within a serene landscape, each fish head is thus transformed into a precious relic from some mysterious ritual. Tattoos also make an appearance the following year in Self-Portrait, Primping with Family in a New Mexico Hotel (1997).  Although Cobb was the only member of his family to sport tattoos at the time, he let his imagination run wild as he decorated his entire family with allover tattoo patterning and even exaggerated his own body markings in this semi-fictional triptych. Energetically charged by the elaborate patterning and the warm glow of light, the scenario reflects Cobb’s view that, while reality is just an illusion, it is always alive and bustling with vitality. 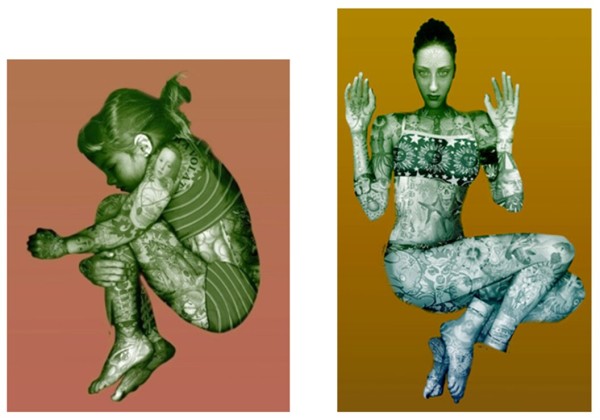 Cobb’s transition into using digital technology occurred at the turn of the Millennium, when he began using a flatbed scanner to scan human bodies. Seeing an opportunity to tattoo scanned bodies digitally using Adobe Illustrator and Photoshop, Cobb invited his children and children of friends to pose on the scanner. In his series Our Children (2000), which was exhibited in 2003-04 at the Cue Art Foundation in New York City, Cobb isolated each child’s body against monochromatic colored backdrops, which makes them seem to float while calling attention the complex latticework of tattoos, which contain layered narratives.

By 2005, Cobb had moved on from producing tattoo imagery to creating intricate abstract linear networks that suggest electrical wires entangled with biomorphic creatures. In his large-scale print Wheel of Delusion, which was first exhibited at Blue Star Contemporary Art Museum, Cobb returned to the tripartite structure of his painted triptychs, with the central panel resembling a computer monitor and the side sections attached to it in a manner that recalls the open doors of a traditional religious altar. With this connection to art history, Wheel of Delusion makes a convincing case for the legitimacy of digital media as a viable alternative to painting.

Today, Cobb works with both of these mediums. Created through an intuitive process using either brushes or a mouse, Cobb’s recent paintings and digital prints mostly explore issues of perception, with his imagined universes populated with intricate linear networks, biomorphic flora and fauna, or a comingling of both. In the ambitious painting A Thousand Arms of Compassion (2011-13), Cobb presents a clever approach to exploring the relationship between flatness and illusionism. With the space of the painting divided into three overlapping layers, all parallel to the picture plane, there is an effective union of trompe l’oeil, seen in the front and rear layers, and the minimal geometry of the middle dividing wall, which is positioned off center such that it animates the clustering branches of the foreground. Reinforced by the title appropriated from Buddhist art, the bristling energy of the branches provide the perfect expression of a plea for worldwide sharing of compassion. 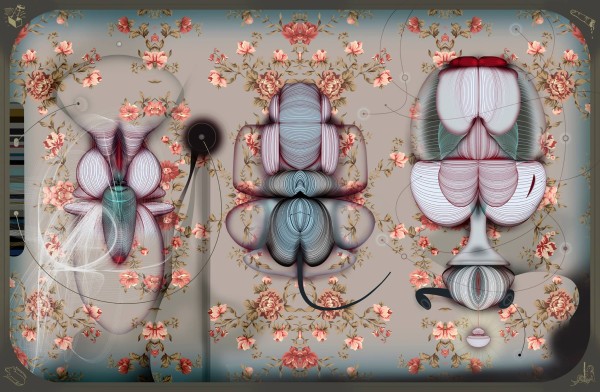 Cobb’s current interest centers around the rapidly changing technology of printmaking.  Excited by several new printing processes that have emerged within the past few years, he  has opted to have his latest digital compositions printed on metal using a new photographic imaging process with high definition capabilities. For Cobb, the benefits of using metal are that the printed surface is more durable than paper, yet it still has a porous quality that lets the imagery breathe and resonate. This quality will be visible at the Sala Diaz exhibition in prints such as Inland Sea (2014), which depicts a dreamlike vision in which three sea creatures float in an amorphous space above a floral network, itself appropriated from vintage wallpaper patterns found online and then painstakingly digitally repainted.