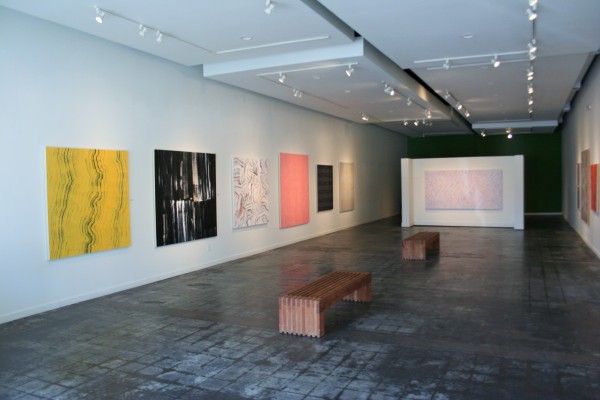 Vincent Falsetta’s painting process has undergone various stylistic changes throughout the past four decades. A recent exhibition at UNT on the Square in Denton offered a small cross section of his steady, committed practice. Falsetta neatly packs a dizzying amount of visual information into rhythmic, all-over compositions that pulse and shake. The fifteen paintings in the show, dating back to 1975, borrow from the vocabularies of hard-edged and gestural abstraction, Pop and Op Art. Rather than arranging the works chronologically, they have been jumbled up in a way that plays up their differences in palette, iconography, compositional strategy and touch. Connections growing from a commitment to a set of formal parameters and an integrity of materials and craft are found across the work. 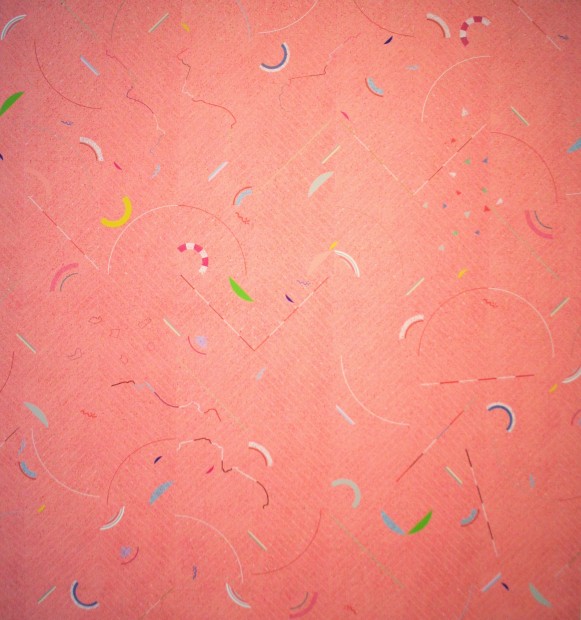 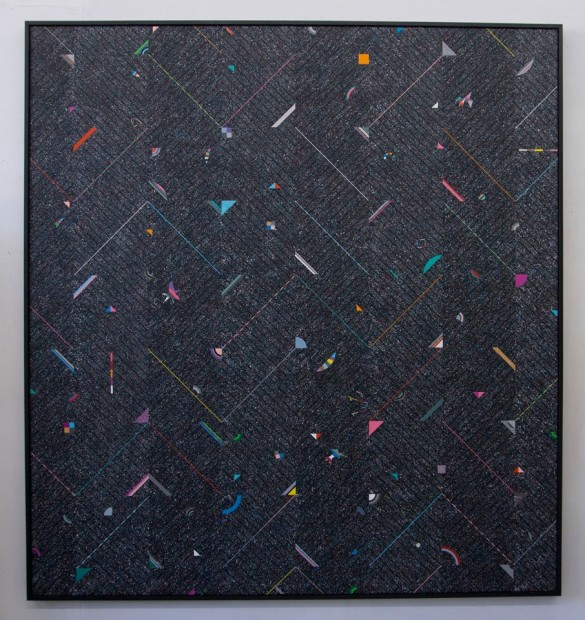 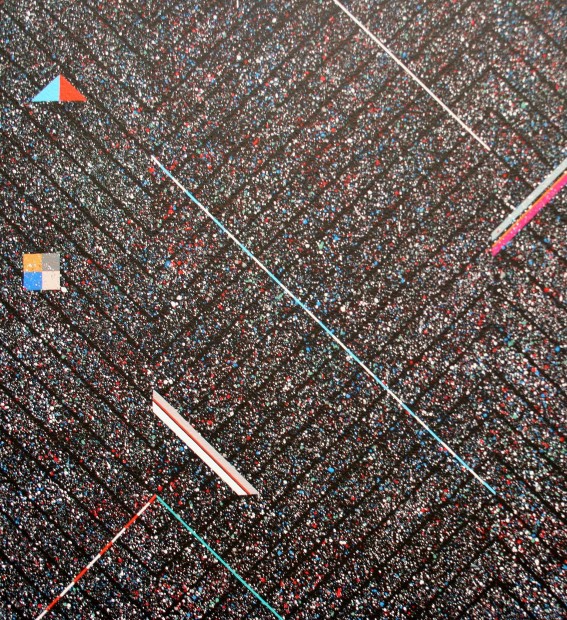 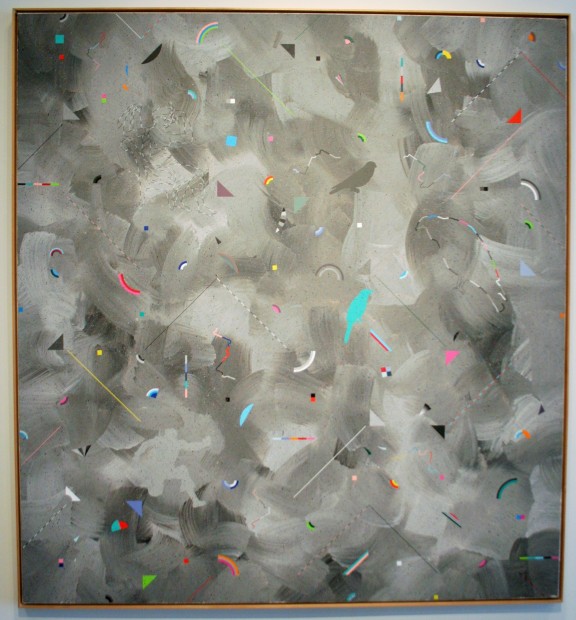 Falsetta’s canvases are non-objective and totally uninterested in realism; rather than portray reality they seek to create their own. But they are also pictures, in that they form a fictive space that you look into rather than merely at. The works from the ’80s and early ’90s set this up by arranging quirky, brightly colored shapes on top of a grid-like background. Small half-circles, tilted crescents, striped triangles and squiggly lines populate the already busy ground, impossibly flecked all over with pinhead-sized drops of colored paint. The larger shapes sit on top of their backgrounds and open up a distance, a space. These paintings, at the outset, want you to fall into them—to feel the curved or angled forms against the structured grid that underlies their placement, to see larger shapes before smaller ones, to notice brighter colors first—so that to see an image is largely an involuntary act. 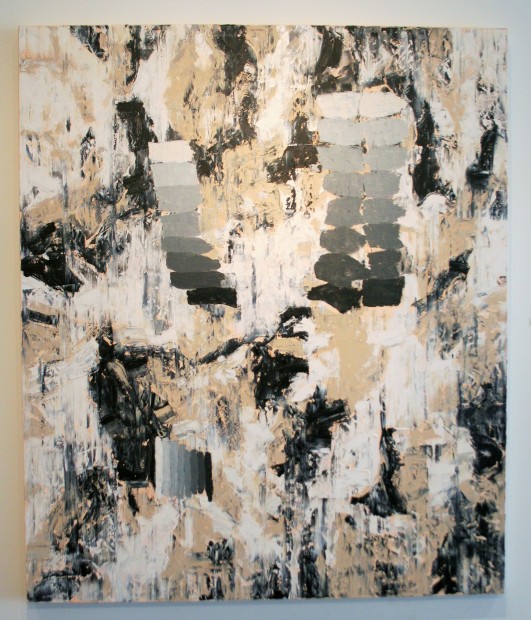 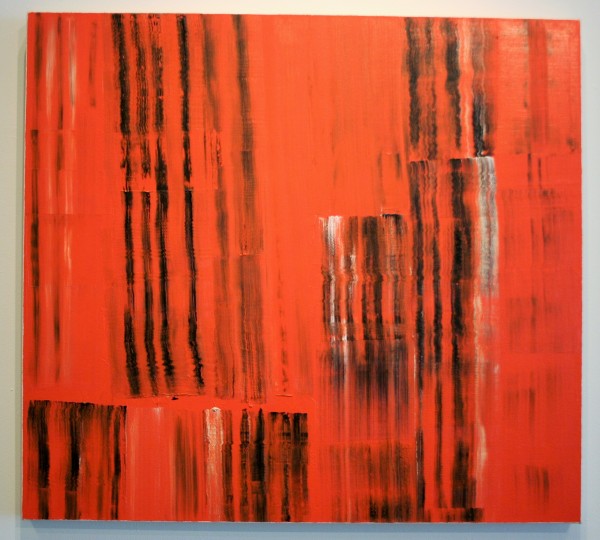 Around the turn of the millennium we see Falsetta beginning to drag the paint more thickly across the canvas. At first glance these feel raw and gestural, and you can sympathize with the movement and direction of the stroke, and how the colors streak and smear. But even here the gesture describes a thoughtful, orchestrated spontaneity. 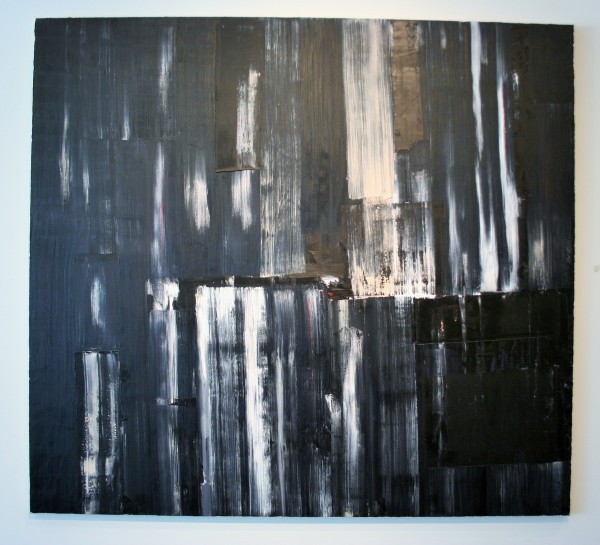 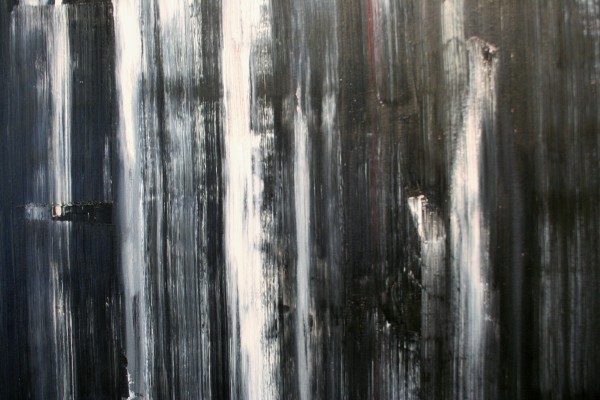 Because Falsetta retains tight control over where and how the party breaks out, it’s only after a series of rigid decisions that he sets up a space for play, and only then that the paintings feel free and improvisational. Though underneath the mathematical precision of the layout there is a resistance to formula. Small differences and variations of similar elements keep the eye on an endless search for pattern/logic. Looking becomes a game of of expectedness and surprise. 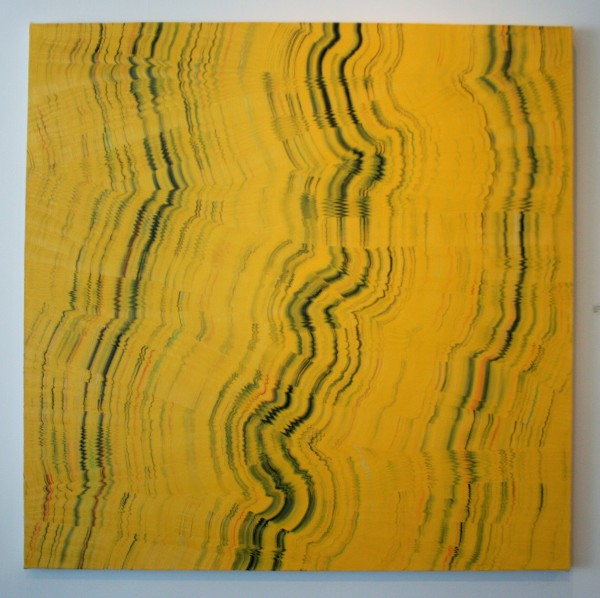 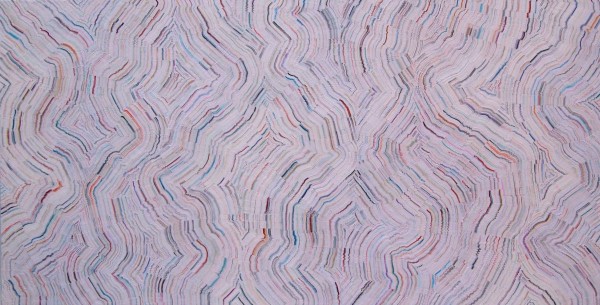 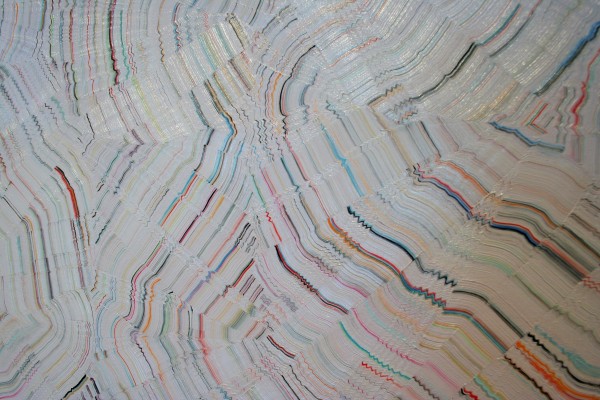 This same tension exists in the newer compositions that get rid of discrete shapes and for the most part avoid a figure/ground scenario. These later works are built from a striated brushstroke that quivers and curves; it grows on itself and covers its edges, hiding its nature as a mark or a gesture. There’s no beginning or end: only the middle, only flux. What you have, then, is paint that disappears into movement, the pictorial equivalent of matter becoming energy or particles becoming waves. The experience of seeing is almost tangible here, and connects the artwork to the viewer, as Op Art did, through the real-time manipulation of the eye. The artwork stands still, but throws the viewer into motion. Though where Op Art had a kinship with minimalism, a matter-of-factness and predictability, Falsetta’s buzzing images seethe with variety.

Through this snapshot of his oeuvre to date, Falsetta’s trajectory feels much like his paintings: a mixture of planned and spontaneous moves. I’ll be anxious to see where the next few decades lead.

The exhibition Vincent Falsetta: Agendas – Several Decades of Painting took place at UT on the Square in Denton, January 26-February 21, 2015.

yes, you totally see movement and it puts you into motion, yet you are standing still. great work