Art Imitates Life: an Interview with Jeff Weiss of Weisslink 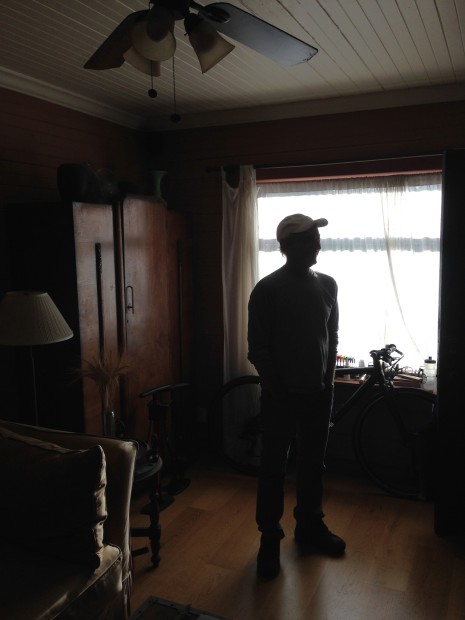 Artist Jeff Weiss doesn’t want you on his list. It’s not you; he’s just not interested in acquiring scores of followers, and couldn’t handle scores now anyway. As his list grows, so does the possibility that he may have to alter the format of Weisslink, the “nightly art / email mashup” that he’s sent out every night for the past thirteen years to a steadily growing legion of subscribers.

When my wife told me about Weisslink a couple of years ago, I asked her how I could sign up. “You have to send him an email and ask to be added to his list,” she said. “Ask who?” I replied, surprised by the quaint idea of personally asking to be added to something as impersonal as an email list. “I don’t know, Mr. Weisslink,” she answered. Of course.

Weisslink usually arrives in your inbox around midnight PST, with the subject line “OLD NEWS” and an anonymous underscore instead of a sender’s name. Each email is a compilation of recent art news and reviews, a text-only medley of whole articles, choice sentences or paragraphs, even writers’ tweets. Especially compelling articles are reproduced in full in their own dedicated emails. The only rules he has are that he doesn’t pay anyone, and all content must be available online to everyone for free.

Weiss draws from a cross section of media, including mainstream publications like the Los Angeles Times and The Guardian UK, art periodicals like the Art Newspaper, and online art sites like Hyperallergic.com and Artinfo’s LACMA on Fire blog. He cites sources and authors, composing each email to offer numerous takes on a single issue (such as the Charlie Hebdo massacre), and provocative juxtapositions (labor issues in Abu Dhabi, attempts to unionize adjunct faculty in the US, the detention of Cuban performance artist Tania Bruguera).

He calls himself a “subtractive artist,” often editing heavily to arrive at each email’s finished form. More than simply a quick way to get art updates, Weisslink is a long-running piece of appropriation art, creating new meaning from the glut of information available online. (In 2011, he posted the first ten years of Weisslink online as Art Imitates Life, an overwhelming 3 million word scrolling text feed.) Although his selections and edits give some sense of the man behind the emails, Weiss has never contributed a single word.

There’s something perplexing about Weisslink. It’s a digital document that is stubbornly analog with its cut-and-paste text format and manual subscription method. Its form has not changed since its inception, an anachronism amongst the image-laden and html formatted email newsletters that flood our inboxes daily. He has spent part of every day since 2001 working on Weisslink, but doesn’t advertise and has no desire to monetize it or increase his subscriber list. He doesn’t even want his name on it. All of this left me wanting to know, “Who is Mr. Weisslink?” I emailed him recently, and he agreed to meet for lunch near his modest Santa Monica apartment, a few blocks from the beach.

Jeff Weiss was born in the Bronx, and grew up on Long Island (which he refers to as a “wasteland”) in the 50s. When he speaks, he still has the no-nonsense delivery of a New Yorker. He studied zoology and genetics, becoming a science teacher. In his mid-20’s he became interested in photography. “I wound up being a photography teacher, and somehow turned into an artist. I only gave degrees, I never got one,” he joked.

Weiss has been steadily making art since the late 1960s. Much of his work is photo-based, incorporating elements of performance, sculpture, text and land art. He has spent the last few years working on the Prometheus Project, an ambitious multi-platform piece based on memories of a bristlecone pine tree in Nevada’s Great Basin National Park. “Prometheus,” as it was dubbed by the locals, was the oldest known living thing on earth when it was cut down in 1964.

Alongside his art practice, Weiss has established a teaching career, which has taken him to Vermont, upstate New York, Los Angeles in the 1980s, and back to New York City. He left Brooklyn and moved to LA for the second time a few years before Hurricane Sandy hit.

Weisslink began in the classroom in 2001, when there was a push from the college administration to focus on art theory and text. “What I got from the students was ‘I’m not reading that boring bullshit,’ so I made Weisslink to give them something to read that wasn’t boring bullshit that they’d actually like to read,” he said.

Weisslink has spread organically and now has about 1600 subscribers, but it’s hard to tell the actual reach since many people forward it. “It started with my students and I have never solicited anyone, never advertised in any way, never asked anyone in any form to join up, and what there is now came from that, so it’s all word of mouth. Every person that’s on there, has asked to be on there… It is amusing to watch the circuit too, who tells who and how it found its way there. At this point it’s all over the world and there’s a lot of heavy hitters.”

Weiss has been in an ongoing battle with Internet service providers who usually cap the number of recipients for each email at about 400, and demand that mass emails contain an opt-out clause. Many people use e-mail newsletter services like Constant Contact or Mail Chimp because of these requirements, but Weiss refuses to change his format.

“It’s looked the same since it started and I’ve spent a lot of energy into keeping it looking the same. That’s why I haven’t wanted to go with all their corporate shit, because it won’t look the same.’ he said. “I’m an artist, it’s form, you know? This is an artwork and the way it looks is important.”

After lengthy negotiations with his ISP, they agreed to allow him to send to 1800 people at once, but he doesn’t know what he’s going to do once he reaches that limit.

Although Weisslink contains “the news,” Weiss considers it first and foremost a work of art. When we first met, I referred to Weisslink as an “art world digest,” which he bristled at slightly.

“One of the things that’s interesting to me is what people think it is,” he said. “What I call it is a handcrafted virtual artwork, but I don’t mind that nobody else thinks it’s that. It gets called all sorts of things, and a lot of things that people think that it is, it definitely is not. Some people think it’s an aggregator. It’s definitely not an aggregator, because an aggregator is a piece of software. This is handmade every night by me. There’s no machines involved. Some people call it a blog. I’m not sure I know exactly what the definition of a blog is, but I’m pretty sure it’s not a blog. It gets called a newsletter. I’m pretty sure it’s not a newsletter. Every newsletter I’ve ever seen, somebody’s writing. I’ve never written a word. You just called it an art world digest. I guess it could be that, but I’m not really very interested in the art world.”

I don’t buy that completely. Weiss may not be interested in the elements of the art world that end up on the society pages or the gossip columns, but he seems very concerned with how those elements relate to and affect works of art and artists in general. The words he reprints reflect the economic, social and intellectual issues swirling around Art with a capital A – a “portrait of the art world,” as he calls it.

“One question every artist deals with all the time – or should be dealing with – is ‘what is art?’ and everybody has to answer that question with their work, so that’s basically what I think the subject matter of OLD NEWS is, ‘what is art?’” Weiss said. “So we get the authorities – being people who write about art, people who run museums and galleries, and artists – to tell us what they think art is on a daily basis. I would say I’m making a portrait of the art world, or what art is today.”

Contrary to the current pulse of the art world, Weiss has an almost monastic aversion to fame and money. He doesn’t hide his identity on the emails, but doesn’t publicize it either. He’s refused offers by his advocates to bring him thousands of followers or get him to monetize. He even had misgivings about the attention this article would bring him.

“If you write something about it and I get 500 people who want to be on the list, what am I gonna do?” he asked me. “The people who want to promote me always tell me, ‘you’ll get more clicks,’ and I go, ‘well why do I want more clicks?’ and they go, ’cause you can monetize this,’ and I keep saying ‘I don’t wanna monetize this, so why do I need clicks?’ ‘Well you need at least 5000 for people to take you seriously.’ Well I don’t care if they take me seriously. No one even thinks this is a question worth asking. When did that happen? More eyeballs are better?! Why?!”

Despite his desire for anonymity, Weiss has placed himself at the center of a daily connection between the artists, dealers, writers, curators, academics, and enthusiasts. Ironically, he often gets little sense of the reaction to his “handcrafted virtual artworks” once he sends them out into the ether each night. He told me about an art writer he started including in Weisslink after finding her blog about twelve years ago.

“I thought, ‘this woman is fabulous! She’s not a New York white guy, she’s got a big mouth, and she’s coming from somewhere else. She’s incredibly articulate.’ A year ago at the most, I finally heard from her. She just said, ‘I hear you have a thing. I wanna sign up for your thing.’ I just wrote back and said, ‘Where the fuck have you been?'”

Matt Stromberg is a freelance visual arts writer based in Los Angeles. He is a frequent contributor to Glasstire, Hyperallergic, Daily Serving, and KCET Artbound, and is currently the art editor of the Los Angeles Review of Books.

I like this article about Jeff Weiss, and I want to sign up for OLD NEWS, but every attempt to contact Jeff has come back as an incorrect address.

Would you please send me his, or it’s email.

thanks for your feedback. the email on the bio page of his site is probably best – http://www.weisslink.com/index.php?/bio2/test/

Matt, you can email Jeff and sign Camille up. Just get her email address. I’ve signed up lots of folks that way. Loved your article. Jeff came to Vermont College to do crits at the summer residencies when I was in grad school. I found him to be one of the most astute artists there. He actually listened and looked before starting to talk about one’s work. Thanks! Jane

Jeff is one of the best professors I ever had! Great to see him on Glasstire, even if it’s just his shadow;) Thanks for sharing Matt!

Weisslink is great, and for me to everyone, I must say it’s pure Jeff, and that’s why. I met him in 1967, it began with him being my science teacher in 7th grade. He introduced me to photography then, and has remained to this day the fundamental person at the origin of my life in art. And of course, the rest is history for both of us and many others who have crossed Jeff’s path. So I am grateful for the beginning and the ongoing that Jeff and Weisslink is!