Although trained as a ceramicist with degrees in crafts and artisanry, Jennifer Ling Datchuk could hardly be labeled a “craftsperson.” Having gone even further afield from treating the ceramic object in its traditional functional role than artists like Viola Frey, whose monumental ceramic figures were revolutionary in their day, or Grayson Perry, who adorns his ceramic vessels with narrative tales of his transgender alter ego, Datchuk produces performance-based ceramic sculptures that have more in common with the conceptual paintings of Byron Kim, whose early minimal abstractions inventoried various skin tones, or with the figurative sculptures of Janine Antoni, that were made by washing with soap and licking chocolate to call attention to health and vanity issues faced by women. All the while, however, Datchuk has never abandoned her love of porcelain, which continues to serve as a favored medium.

A relatively emerging artist, the San Antonio-based Datchuk has thus far maintained a concentrated and steady focus on issues surrounding her identity. The daughter of a Chinese mother and a Russian-Irish father, Datchuk has faced the complexities of otherness for her entire life. Being of mixed race, she has been a target of the predictable prejudices and she has struggled for many years with the challenge of being “in-between, an imposter, neither fully Chinese nor Caucasian.” Additionally, Datchuk is open about coming from a dysfunctional family; her parents are divorced and they have been estranged from her for several years. (She herself, however, is happily married to ceramicist Ryan Takaba.) 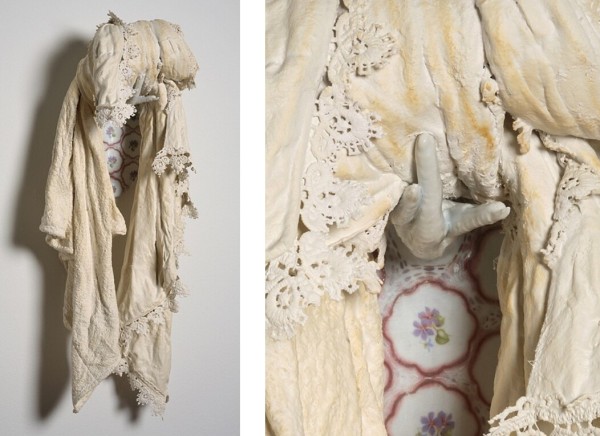 For her 2008 MFA exhibition at the University of Massachusetts Dartmouth, Datchuk fabricated a grouping of porcelain objects associated with Chinese heritage and domestic life, the most impressive of which took the form of knotted fabrics suspended from decorative coat racks with hooks made to look like chicken feet—a traditional Chinese edible—and patterns made from decals purchased on eBay. Created by dipping actual handkerchiefs in unfired porcelain slip, the knotted forms appear exquisitely elegant and fragile when draped over their fired porcelain holders. For Datchuk, the handkerchiefs are catchers of tears and thus signifiers of sadness, while porcelain alludes not only to the material’s prevalence in Chinese art history, but also connotes “whiteness,” the desire for which she feels exists within both Chinese and Caucasian cultures.

Whiteness, of course, has been addressed in recent years by many contemporary artists and “Whiteness: A Wayward Construction,” a superb exhibition on the subject, was organized by Tyler Stallings for the Laguna Art Museum in 2003 and featured works by Daniel J. Martinez, Adrian Piper, Andres Serrano, Kara Walker, and many others whose art examines issues of racial identity. Whiteness, nevertheless, has another meaning within modern and contemporary art history, and may connote such qualities as purity or spirituality, as in the works of Kazimir Malevich or Robert Ryman. In Datchuk’s 2010 installation Erase (at Smart Art Space in San Antonio), both traditions come to mind, while we are also reminded of Robert Rauschenberg’s landmark erasure of Willem DeKooning’s drawing. On the surface, Datchuk’s Erase appears to be a simple grouping of framed white ovoids that evoke a quiet solitude in the manner of Ryman’s white paintings. On closer inspection, however, we discover that the surface material is wax paper, and that the barely visible configurations are ghosts of old family photos. Basing her procedure on a crafts tradition, Datchuk created these works by placing photocopies of old family photos over wax paper stretched in embroidery hoops. Mimicking the process used by embroiderers to transfer images to fabric, she punched holes through the imagery to replicate it. For the artist, the project proved to be a cathartic activity for coping with estrangement from her family. For the viewer, the ovoids may function as contemplative abstract icons or mysterious mirrors that can trigger our imaginations.

Another traditional crafts format served as the prototype for one of the most memorable works from “Dark and Lovely,” Datchuk’s recent solo exhibition at Blue Star Contemporary Art Museum. Structured like one of the most popular forms of Americana, the sampler, Sampler from an American Born Chinese (2014) is one of the first works by Datchuk to introduce a performative element—the daily collection of her hair from porcelain cast shower drains—into the production of her art. For Datchuk, her straight black hair is one of the chief characteristics that defines a person as stereotypically Chinese. It is also metaphorically loaded; hair can be perceived as both beautiful and repugnant. To create Sampler, the artist embroidered the shower drains with her own hair, spelling out racial slurs that have been hurled at her over the years. 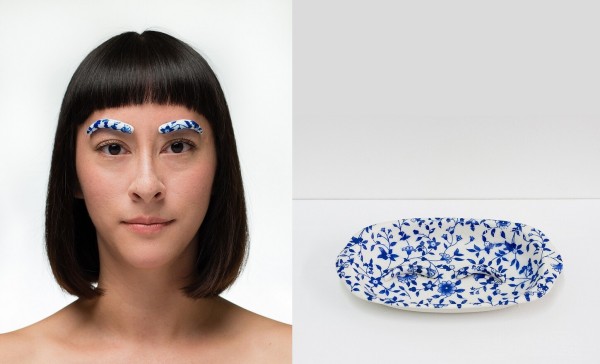 In other works from her “Dark and Lovely” exhibition, Datchuk delved even deeper into performance with her seven-minute video, Pluck (2014), produced in collaboration with Walley Films. In the video (http://vimeo.com/107114848), we see Datchuk sitting before a vanity mirror plucking her eyebrows, hair by hair, while playing the children’s game “He loves me, he loves me not,” until every hair is removed. In preparation for the performance, Datchuk made a number of blue and white porcelain platters with decal patterns based on traditional ones from Jingdezhen, China. Along with each platter, she made accompanying porcelain eyebrows which, following the performance, she affixed to her face using eyelash adhesive. For the final stage of the project, which was its photographic documentation, she juxtaposed self-portraits of her wearing the porcelain eyebrows with images of the eyebrows on the platters, thereby linking her identity to a part of her cultural ancestry. 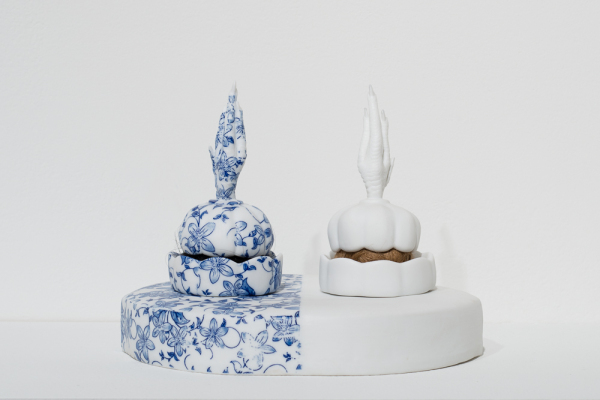 Datchuk’s interest in the Chinese blue-and-white pottery tradition is even more evident in works included in the breathtaking group porcelain exhibition “Intense and Fragile,” which has just ended its run at the Southwest School of Art in San Antonio. In Half (2012), Datchuk gives equal time to both sides of her dual identity, which she has represented in the form of twin powder puffs on a cosmetic stand. Divided evenly into two sections, one half of the work is based on blue-and-white pottery, while the other is entirely white. Correspondingly, the puffs, which have the familiar chicken feet as handles, are made from purchased black and her father’s blonde human hair respectively. 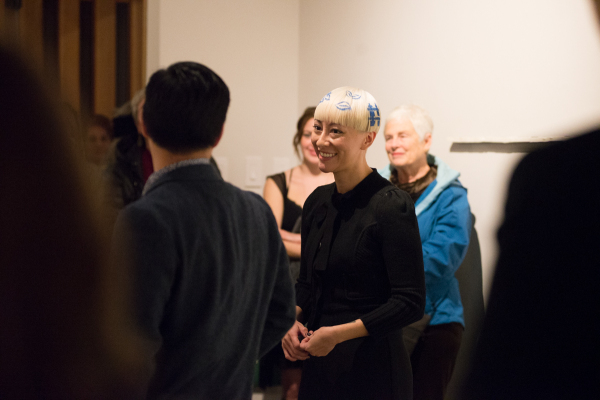 On the day of her joint gallery talk with her husband Ryan Takaba in conjunction with the “Intense and Fragile” exhibition, Datchuk appeared before her audience in performance mode, engaging in a test run for a work in progress inspired by blue-and-white double happiness pots from the 1850s, where patterns resemble paper cut-outs. The performance consisted of Datchuk appearing with her hair cut in the bowl style that she considers a rite of passage for Asian American children. Working in collaboration with stylist Melody Cuellar, Datchuk  bleached her hair blonde and used a stencil and blue hairspray to imprint the Chinese symbol for “double happiness” onto her hair. For Datchuk, the insignia of dual joy was in reference to a shared marital bliss with her husband. As an artwork, the performance was a compelling fusion of her two identities into one.

David, as usual, your erudition and flair for writing interesting and relevant articles about contemporary artists is superb! I am so glad you have remained with us and continue to keep us informed in all things dealing with contemporary art. We are indeed fortunate and truly enjoy reading and always looking forward to your well-reearched articles.
Best, Gustavo