In a very inspired and inspiring choice, the Just Because branch of Fluent~Collaborative presents the notes, sketches, and mind maps of UT economics professor, playwright and pastor Steven Tomlinson. Fluent director Laurence Miller found Tomlinson’s particular method of working while scrolling Facebook and extended an invitation; the resulting show is a perfect match to Fluent’s testsite program with its strong focus on critical writing and Miller’s interest as a collector of conceptual artists’ books and text-based art. 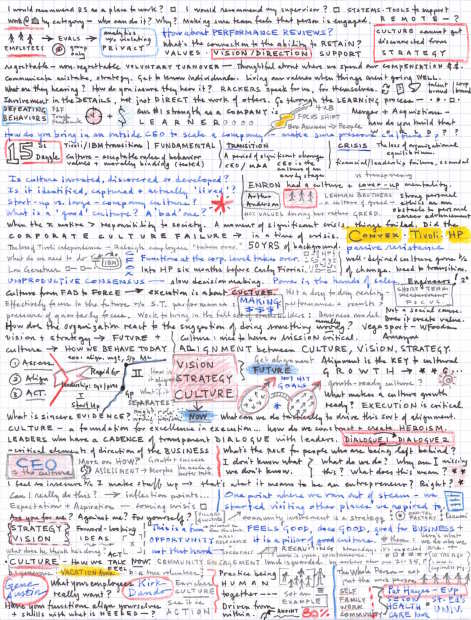 When Tomlinson walked me through the exhibition last week, he mentioned he carries a notebook with him at all times to capture the “cognitive dandruff” and “exfoliations” of his mind, a humble and lyrical way of describing the permutations of an active and prolific thinker. I refrain from writing “restless” because that description implies agitation. Rather, Tomlinson wrestles, grapples, turns over an idea in his head, perusing it with curiosity and a will to understand, so that when the idea is translated to paper via the hand, it is articulated with the most impressive clarity of thought and density of form. 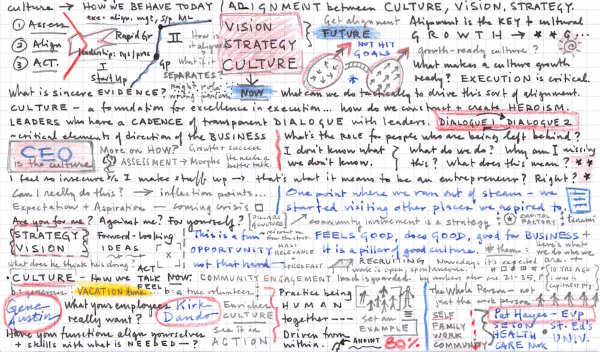 In his show at Fluent~Collaborative in Austin, notebook pages of all sizes are inscribed from edge to edge with crisp, block-printed letters. Some words are bold, or written in all caps, or highlighted in different colors, outlined with boxes, written larger or combinations of the above. Mark Lombardi’s drawings come to mind, for the way Tomlinson details complex macro-scale systems. Also dance notations: in a sense, Tomlinson’s engagement with pen and paper is as related to choreography as it is to drawing, for he notates the choreography of his mind as it moves and dances around an idea.

The content of Tomlinson’s musings are as compelling as their form. Each page of notes speaks to a question of one of his multiple practices. While economics, theatre and spirituality are superficially divided into separate disciplines, Tomlinson finds the connective tissues in humanness. As an economist and business consultant, Tomlinson’s questions revolve around value and how to integrate human values like compassion, kindness, and intimacy into the systems of exchange, matching money to emotion in business. For example, to solve the problem of rescaling authority in corporate structures, Tomlinson’s drawing of a hierarchical apex with a leader at the top flips when one reconsiders the image not as a two-dimensional schema but as a perspectival drawing. Top-down power structures are conceptualized as a group of people working with different priorities towards the same goals around a corporate conference table.

As a playwright, questions of performance and presenting oneself are a primary concern. On another page from a different notebook, Tomlinson maps the path from performative posturing as a defense mechanism that leads to antagonist relationships. In another drawing on the same page, he presents generosity, vulnerability and open-heartedness as attributes that pave the path to connectivity. He also uses his methods to weave multiple threads of a narrative together into his plays. 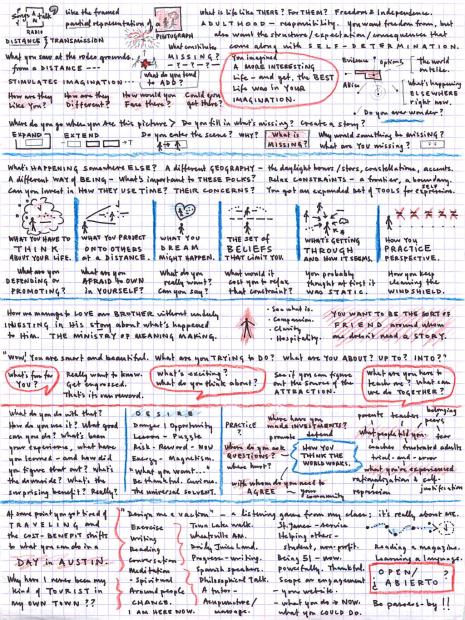 Other questions Tomlinson asks in his notebook include: How does polygamy work under the law? How is the dialogue you have with another person structurally related to your own internal conversations? What are the emotional and cognitive experiences of preparing for a meeting? When do you show up as yourself and when do you perform a role? Each question is explored in depth in text and corresponding hand-drawn illustrations.

There is an incarnational aspect to Tomlinson’s show at Fluent, linking in Tomlinson’s former life as a pastor. His dedication to materializing his thoughts in these notebooks is almost ritual-like. For all the ink and paper that documents Tomlinson’s journeys down various rabbit-holes of thinking, the notebooks are especially potent for what is not written but permeates their pages: the expression of spirit and a spiritual practice.

Don’t miss Tomlinson’s workshop, Thinking Aloud on Paper, on February 10 (6-8 PM). To spend time with him and his work is a real treat.

Inspiring – I want to carry a notepad with me now