The video exhibition Call and Response curated by Charles Dee Mitchell and Danielle Avram Morgan currently on exhibit at the MAC is part of the month-long Dallas Medianale Festival, which is a (new this year) program of the Video Association of Dallas, the group behind Dallas VideoFest. Although the curators say this particular exhibit of the Medianale isn’t theme-driven, I noticed a couple of common threads between videos including a riff on the idea of call-and-response music, and re-interpretations of previous iconic videos/films, which is a take on call and response in itself. 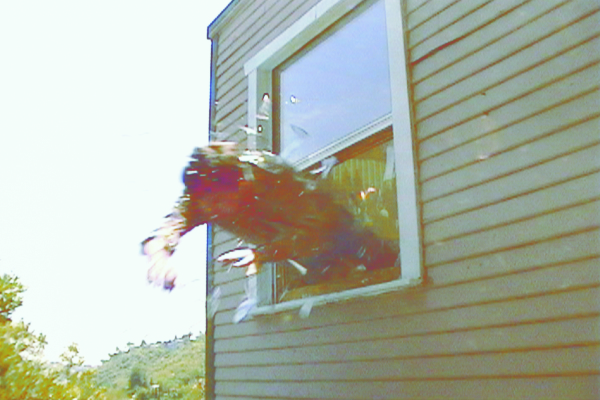 In traditional call-and-response music, one musician plays a phrase followed by another musician who spontaneously responds by playing a different, unrehearsed phrase, providing direct musical feedback or commentary on the first. Joe Sola’s video Studio Visit (2005) emotionally embodies this principle. In a series of short vignettes, an artist (presumably Joe Sola) presents his work in his studio to different curators. The sound was difficult to hear, but the specifics of the dialogue are unimportant. After a minute or so into the studio visit, the overwhelmed artist takes a running leap, crashing through the plate glass window. In all vignettes, the curators laugh, artist’s safety be damned. Usually after the laughter subsides, one of the curators casually looks out the window to the ground below. I appreciated the absurdity around the anxiety and pressure of selling one’s work to the art establishment. 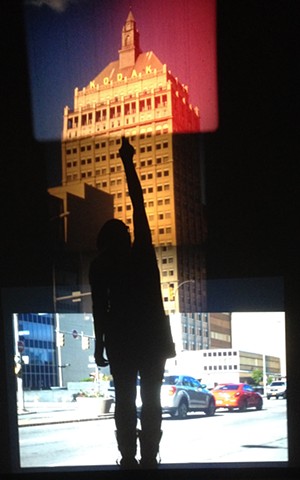 The Nelsons’ “End of Empire”

The work of collaborative duo Tara Merenda Nelson and Gordon Nelson, as well as that of John Boyle-Singfield, interprets call and response more directly. The Nelsons’ video End of an Empire references Andy Warhol’s 1964 film Empire, an eight-hour epic of slow motion footage of the Empire State Building. End of an Empire instead features the Kodak building, and at the MAC is projected on a slide projector and two old film projectors. In a serendipitous moment during my viewing, one of the film projectors broke, reinforcing the melancholy idea of Kodak as a nearly extinct dinosaur.

John Boyle-Singfield Sings Google’s Terms of Service pays homage to John Baldessari’s seminal early video where Baldessari sings lines from Sol Lewitt’s writings in an off-key monotone. (Even though I have watched it numerous times, it still cracks me up.) Artist Boyle-Singfield sings in the same deadpan monotone, and his spot-on reference combined with the suggestion that Google is the new-world prophet is brilliant.

Included in the program are early works from video pioneers Bruce Nauman and Gary Hill. Nauman’s Walking in an Exaggerated Manner Around the Perimeter of a Square (1967-1968) is an example of how early video artists explored repetition and endurance as performative meditation. I’ve always been a big fan of Gary Hill’s work; his oeuvre is language—language as written text, spoken word, communication/miscommunication and the interplay between image and text. In his video Mediations (Toward a Remake of Soundings) (1979/1986), sound becomes visual as Hill’s voice vibrates through a speaker, causing sand granules to jump and move to the cadence of his voice. Excerpt: “A voice in hand is worth two in the sand.”

There are two Owen Kydd videos here: Composition and Framing the Floor (2012). Both resemble moving still-life paintings. The vertical frames suggest portraiture, subverting video’s traditional horizontal composition. Like Nauman, Kydd focuses on the ordinary—a garbage bag gently blowing in the wind, and a detail of water dripping on the floor. 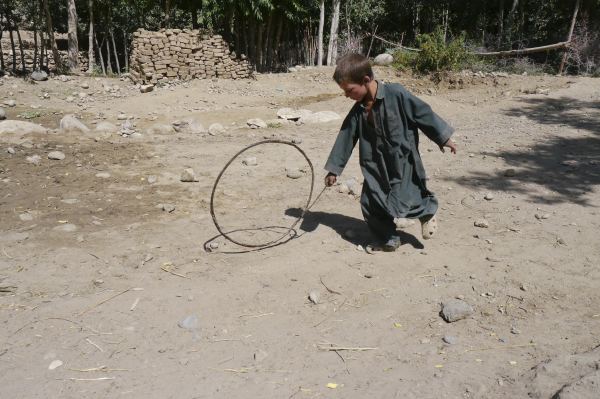 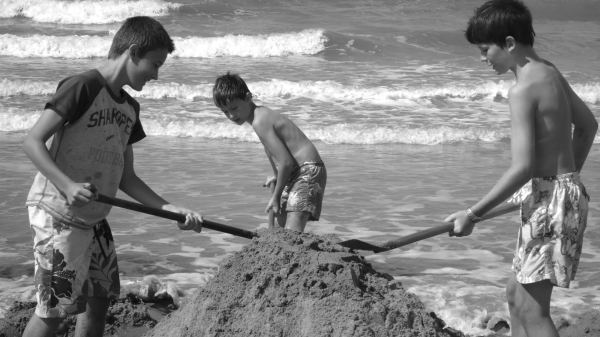 The other gallery features fifteen videos by Francis Alÿs from his series Children’s Games (1999-2013). On the surface it really is kids playing, but in terms of the exhibition’s title, contextual layers emerge. The kid’s games are all a form of call and response. Alÿs filmed in countries recently and currently ravaged by war and violence including Afghanistan, Mexico, Venezuela and Jordan. On the surface, the games seem innocent, but one can’t help but draw parallels with wartime activities. In Piñata, blindfolded children beat an inanimate something “to death” to get their reward. In Sandcastles, the children appear to be digging graves. Alÿs intersperses stunning vistas with the shots of children’s play to give the viewer a sense of place. This body of work highlights the universality of children’s games as well as children’s resilience, despite the violence that surrounds them.

Call and Response runs through March 7, 2015 in the MAC’s main galleries, and there are two remaining Medianale events at the MAC: a Feb. 13 screening curated by Mike Morris (7:30-10pm) and a Feb. 28 program curated by Carolyn Sorter (6:30-9:30pm). McKinney Avenue Contemporary, Dallas