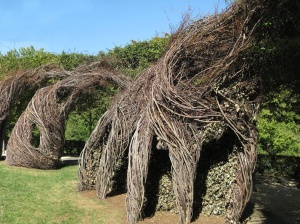 An example of Dougherty’s work

Texas A&M University-Commerce has commissioned North Carolina-based sculptor Patrick Dougherty, an artist known for his massive outdoor bent-sapling installations, to create a new temporary public artwork for the campus. The artist, who locally sources his materials, has been gathering branches and saplings in and around Commerce since January 17, and has enlisted local volunteers and university students in the effort. The site-specific piece will be installed in front of the library, and should be completed in early February.

Dougherty has produced at least 230 of these types of works across the country and beyond over the last 30 years, including in Denmark and Japan, and last year at Houston’s Hermann Park. He’s won many foundation grants and awards, including the Pollock-Krasner Foundation Grant, the Henry Moore Foundation Fellowship, the Japan-US Creative Arts Fellowship, and the National Endowment for the Arts Fellowship.

Dougherty will give a public lecture on January 28 at 5:30 p.m. in the campus’ Performing Arts Center theater.