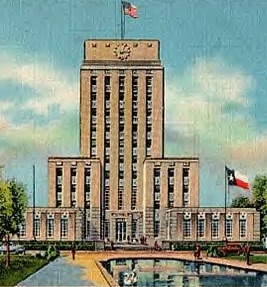 Houston artists Nohelia Vargas Bolivar and Liza Littlefield have asked that their work be removed from Houston City Hall as a show of solidarity with artist Ed Wilson, who was selected for a commission for the George R. Brown convention by a HAA review panel, only to have it abruptly withdrawn when HAA’s Civic Art Committee objected.

Both artists were asked to loan works to be displayed in City Hall by HAA, and where it was to be on loan through August 2015. They were each paid $150.

To Littlefield, who first had the idea, removing her art just seemed the right thing to do: “I’m not really a very political person, but I live across the street from Ed, and I’ve known him for years. As a person who’s a voter in this city, I think they certainly have to change the way they do things, it’s not right. It’s just not right.”

Vargas said, “We want to make a statement about the mishandling of the Ed Wilson commission by HAA, and we also want to support Matthew Lennon. We don’t want his resignation to be in vain.”

Vargas also took issue with the way her art was to be shown. “At first, I was very excited to have my work there, but then I felt like they were not embracing the artwork like they are supposed to. They just take it, hang it on the walls, and that’s it. They’re pretty much using the artwork to decorate the walls at City Hall – taking original artworks from local artists as if it were a commodity. Art is a form of education to me.”

There will be no angry mob of Houston artists storming City Hall. HAA will arrange the removal of the work and its return. Said Vargas, “It’s nothing dramatic — we called, they agreed. We have to give back the money.”

There should be more comments here (fear?). Kudos artists, your message will be heard and respected.

I am not familiar with any of these artists, being somewhat new to the area, but I understand this response. First of all, the city of Houston should be ashamed that they would pay it’s Citizen Artists a laughable honorarium of merely $150.00 to display artwork in “City Hall” of all places. It has been written that, “a worker is worth his/her hire.” How can this city claimed to be culturally on par with cities like Chicago, Los Angeles, and New York, when our City leaders,show through their actions, that “they just don’t get it”. Many artists have studied long and hard, to be excellent at their craft, (with the student loans to prove it) we should demand that we are compensated fairly, or find other venues to show our work to those who the knowledge to appreciate it.

FYI: This exhibition came as a directive from HAA’s CEO, to the civic art team, as a favor to the Mayor’s liaison.

It was HAA’s Civic Art Team that funded the exhibition fees and facilitated a loan agreement through The Alliance Gallery. That provides insurance coverage protecting the art.

City Hall should follow the example of the Houston Airport System and initiate a fund for a portable works collection.