In the Caverns of Your Mind: Ian James at Self Actualization Gallery

14 people came out on a wet Saturday night to see JD Emmanuel, Meredith Corvette Carter, and Ian James perform at James’ new show at Self Actualization gallery. It’s a big space, the entire top floor of an empty office building in midtown Houston, and cold: the heat was turned off long ago. The ceiling is a checkerboard of missing panels and buzzing fluorescent tubes. Trickles of water leak across the gummy swirls of old carpet adhesive on the stripped concrete floors. It was the last place for a spiritual awakening. 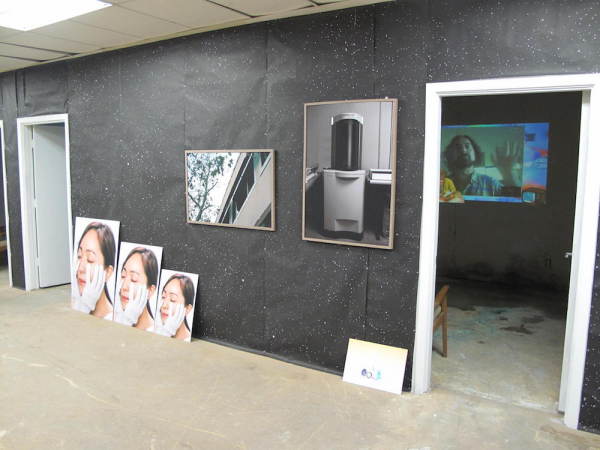 Ian James’ visuals echoed the decrepit commercial space: the old partition walls were wrapped in rumpled star-mural wallpaper. A couple dozen of James’ bland photographs were pinned up like inspirational break-room posters. The show begins and ends with two improvised grass teepees like a squatters’ encampment. 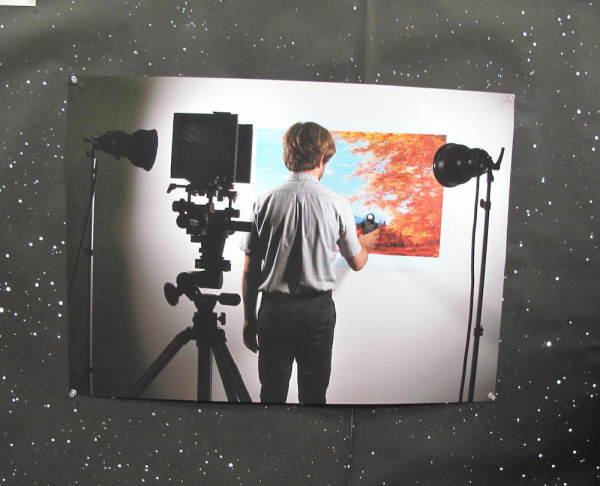 The visual parts of James show seem incomplete and tragic: a stage set for an experience, not the experience itself. The photos skeptically depict products through which people hope to touch the sublime: cardboard gurus, Aether Gel, sparkly Conductive Fiber Electro Therapy Gloves, and parallel them with the tools of the commercial photographer’s trade, a large format camera, a scanner, a model, a flat file, pointing out how stock photography and new-age spirituality share the same goals: making the ordinary extraordinary through soft focus.

A row of former office cubicles make ideal mini-screening rooms, and James takes advantage of them to show the five video pieces which are the meat of the show: 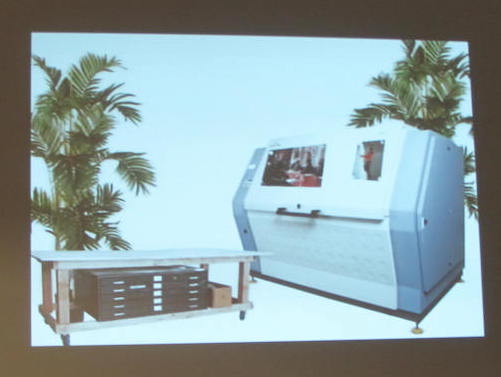 Assortment of waiting areas is a cute, updated surrealist collage: couches, potted plants, shelves and tables, clipped from an office furniture catalog, waft and flip like autumn leaves into different configurations in an aimless holding pattern. Mantras for Future Self (MC), stars a stainless steel mini-refrigerator. Photos displaying the fridge’s features and possibilities (one shows it full of beer) proceed in a slow motion montage of computer windows, that dissolve one into another via an assortment of cheesy video effects which are themselves totemic artifacts of contemporary digital life. A low, sedated voiceover provides irrelevant facts, re-creating the experience of watching home shopping TV while stoned.

James best video, The Square Root of Two is Irrational, was far less media-saturated. Instead, luscious black and white footage depicts trains in a western landscape, centering on a generic man standing outdoors, writing equations on a schoolroom-style chalkboard. The board is transparent glass, allowing us to see a conical hill, centered behind the board, in the background. The man methodically proceeds to demonstrate the mathematical proof of the title statement, annotating the landscape with numbers and symbols. As he lectures, something amazing happens: a freight train appears from a tunnel at the base of the hill and spirals up and around it on tracks that make a complete 360 degree loop, eventually passing behind the math teacher in the foreground. Why this surreal track layout was built, or where it is, I don’t know, but the synergy between the geometric landscape and equations is weirdly compelling. 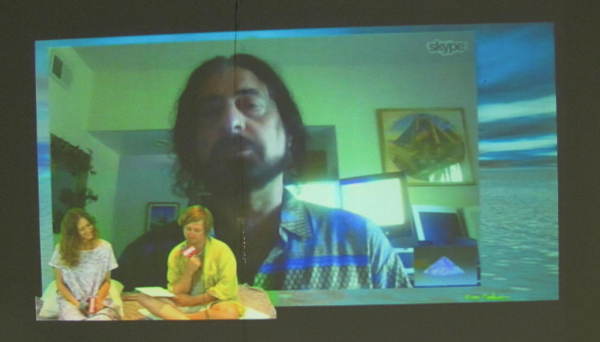 In Healing Light comfort Zone TV, James and Meredith Carter host a call-in self-help talk show, sitting on a blanket in the lower corner of the screen presenting filmed and Skype introducing  gurus JD Emmanuel, Iasos, Kat Epple, and Dick Sutphen, a video version of the live performance in the gallery.

On Saturday night, the floor was too cold for the planned yoga-mat session, so we stood through fifteen minutes of sun circles, chakra focuses, and deep breathing, led by Corvette Carter’s vapid new-age poetry. Next, James delivered a sermon. In the reverent semi-whisper Garrison Keillor uses to recite poetry on NPR, he gave us the sci-fi gospel according to William Gibson: our true selves are software inside our skulls, fed a mediated experience of the world through the senses. It was pathetic, unexpectedly sincere, and embarrassing. 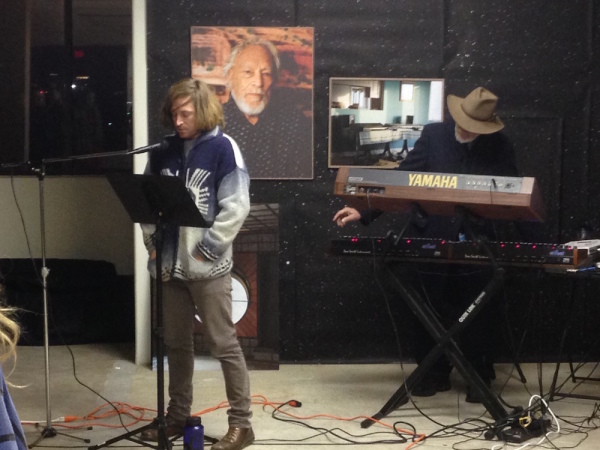 Then J.D. Emmanuel, who had been noodling keyboards in the background, began to play in earnest. His performance was a 16 minute synthesized head-trip soundscape, locked into the seventies by the sounds of his vintage electronic instruments. He’s got every right: he began making this kind of music back then, and was presented, like other artifacts in the show, as a rediscovery by a younger generation of California seekers.

In the 90’s, this kind of slacker art would have been steeped in irony; here there’s a softer, millennial acceptance: though the absurdity of the Sedona Vortex phenomenon (and its guru, Dick Sutphen, represented as a grinning cardboard standee) and the worship of potted houseplants (in an hour long video) are amply evident, they are accompanied by an almost contrarian will to believe.

Ian James: In the Caverns of Your Mind will be on view by appointment at Self-Actualization Gallery through February 15.