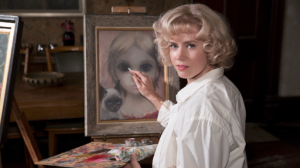 In case you missed it — Big Eyes is a story of Margaret Keane (Amy Adams), an aspiring portrait artist whose work is plagiarized by her crafty and charming husband, Walter Keane (Christoph Waltz). As a movie, the story is clear and simple: a single mom with a talent for portraiture leaves her first husband, desperately trying to support herself and her daughter. Wooed by a would-be plein air painter (Walter), he suggests they marry so she may keep custody of her daughter and he can take charge of their careers as artists. At the time (the 1950s and 60s), men have more success at these things (or so Walter says), so they set out to conquer the world, and the art world, together. 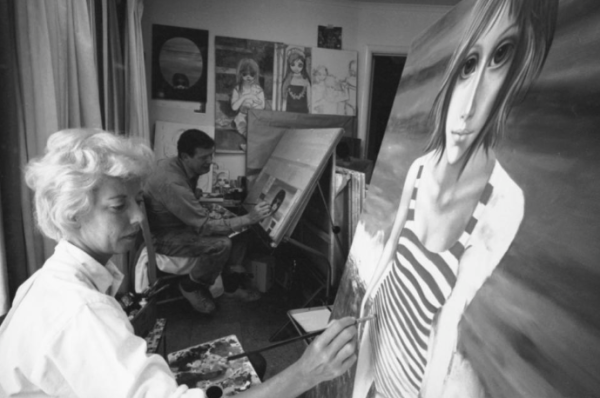 When Walter realizes Margaret’s portraits of children with unnaturally large eyes are far more popular than his own, he stumbles into saying they are his. The marriage then becomes a master/slave relationship as Margaret paints away in secret, kept to ensure financial security for the family. Tearing her apart, Walter’s ego inflates with every sale and PR stunt, while Margaret erodes in the hidden studio, isolated from her stated emotional connection with her work, trampled more and more by Walter’s insatiable appetite for attention and praise. 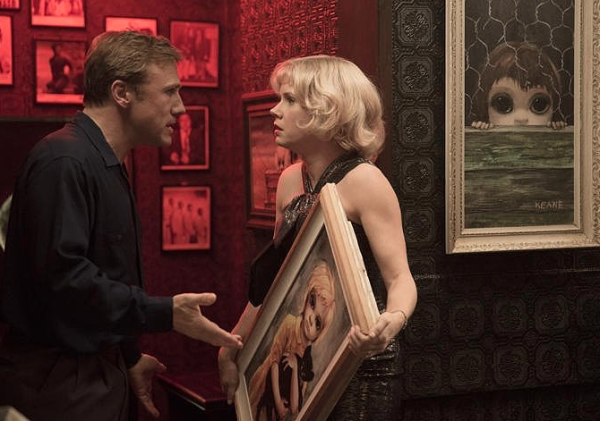 Spoiler alert: Walter hits an abusive breaking point after Margaret discovers he has been lying to her, and she flees again with her daughter to Hawaii, discovers Jehovah’s witnesses, and settles both her divorce from Walter and the secret to whom the Big Eyes belong — by painting a signature portrait in front of a jury. At the trial, Walter represents himself in a clumsy display, then “fakes” a shoulder injury instead of attempting to vindicate himself. It is said Walter never paints again (thought the movie suggests he never painted at all). The movie closes with Margaret as a neo-feminist hero, and Walter leaves the art world an emasculated coward. Leaving the theater, it felt good to know Margaret’s story, and as a movie, it was worth seeing. As a story though, it left me feeling a bit suspicious. 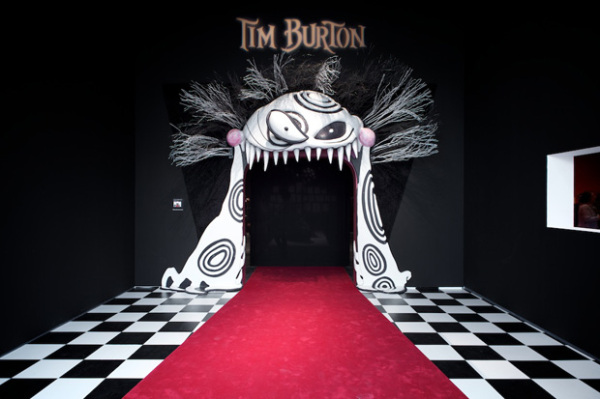 Tim Burton, one of the most revered directors of his time, made stunningly dark yet sparkling films like Beetleljuice and Edward Scissorhands, and stayed relevant to new audiences with pieces like Nightmare Before Christmas and Frankenweenie —  all of which contribute to an iconography that have warranted exhibitions at places like LACMA and MOMA. 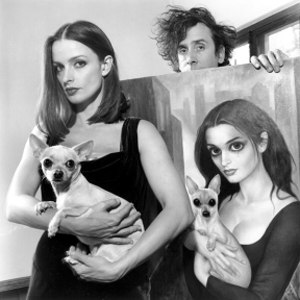 Big Eyes, on the one hand, seems only appropriate under his direction, and is part of the reason I was so excited to see it. The film shows a surprisingly more straightforward and sweet side, treating Margaret with the utmost respect and drawing out her true emotional connection with the art (Burton is said to collect Keane’s work). Walter, by contrast, is damned by his poisonous charm and appetite for fame and fortune. Some call the film a healthy departure, others say it’s a triumph simply because it was finally a project where Burton didn’t call Johnny Depp to play dress up. 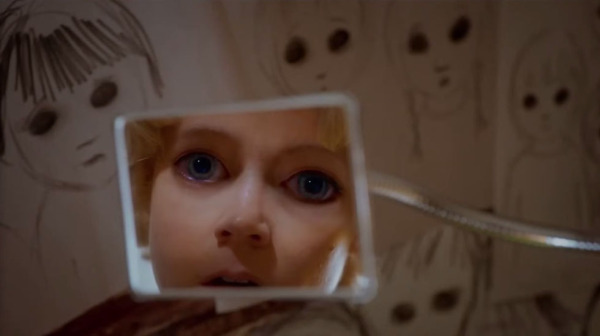 On the other hand, the film tasted flat. No underlying supernatural mysteries or surreal satire of reality guided the story as is so reminiscent of Burton. There was no intimate connection with anything otherworldly or “Burtonesque” at all. There were moments where Margaret hallucinates and sees the “Big Eyes” on real people at the supermarket and on herself, suggesting the motif was perhaps inherent in her psyche, but the episodes seemed too brief and symptomatic of her repetitive emotional stress rather than being deeply rooted in her creative persona. 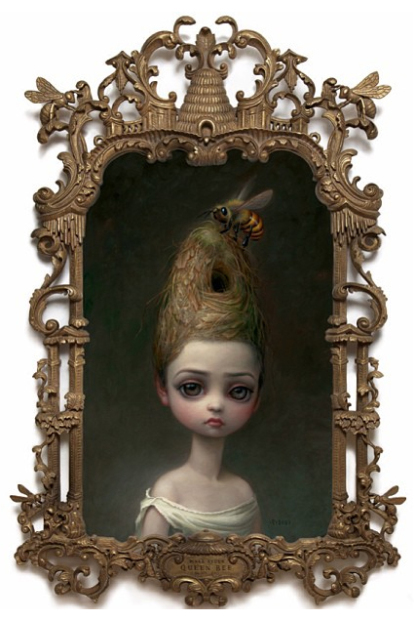 If the story seems a little dubious, too simple, you wouldn’t be alone. Beyond it being a rather dry film for Burton, California artist Mark Ryden (a big eye disciple, one could argue) and his wife posted on their Facebook page that the film was incredibly oversimplified, and downright misleading. On the fringes of the film’s approved script, the plot thickens – not only does Ryden claim Margaret and Walter collaborated on the Big Eye paintings more so than the movie suggests, but when Margaret discovers a crate full of Walter’s paintings that suggests he never painted those either, the film insinuates that Walter never painted a picture in his life. He is portrayed as a fool who might have never studied art nor had a passion for it beyond its capacity to garner money and praise. The film makes quite an assertion that while perfectly fine for artistic license, seems rather harsh and definitive when reifying an oppressed artist, or damning an imposter. 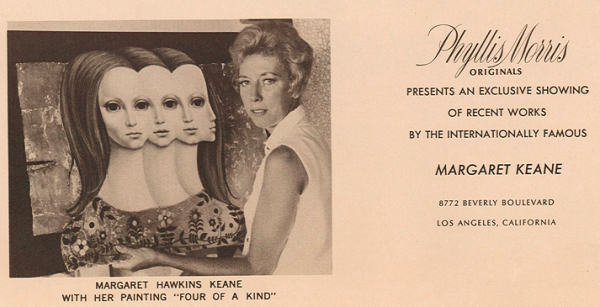 Another article published recently suggests that one of Walter’s daughters witnessed her father conceive the “Big Eye” idea long before Margaret entered the picture, and that Margaret, far from being connected emotionally with her portraits, was simply a master at copying. Her original work, said to be inspired by Modigliani and nothing like her Big Eye portraits, along with a background as a commercial artist, are used to discredit Margaret’s humbly pure intentions. Others discredit the estranged daughter as blindly loyal to her father, and the assertions and rumors swirl. The book, “Citizen Keane: The Big Lies Behind the Big Eyes” is said to have largely inspired Burton’s telling of the tale. 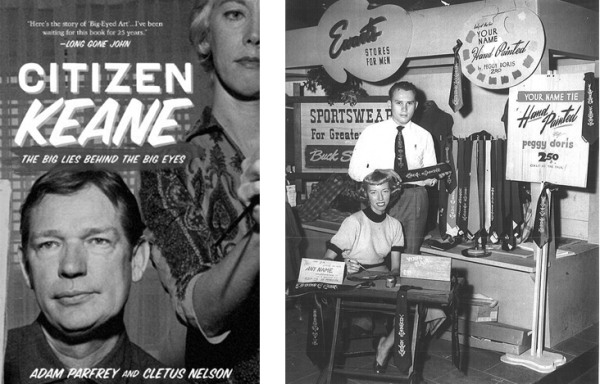 I’m not on a journalistic truth dig. It is however, important not to take such a film at face value, feeling as if history has been served. Remember other art power couples (some with films about them) Frida Kahlo and Diego Rivera, Lee Krasner and Jackson Pollock, Georgia O’Keefe and Alfred Stieglitz, or Jeremy Blake and Theresa Duncan (HBO mini-series, please, somebody!) The point being: couples, and in particular couples made up of artists, make for some interesting, complicated shit. Love, comedy, drama, ego, betrayal and disgust — desires and disasters — how could anyone possibly get to the absolute bottom of any such story? 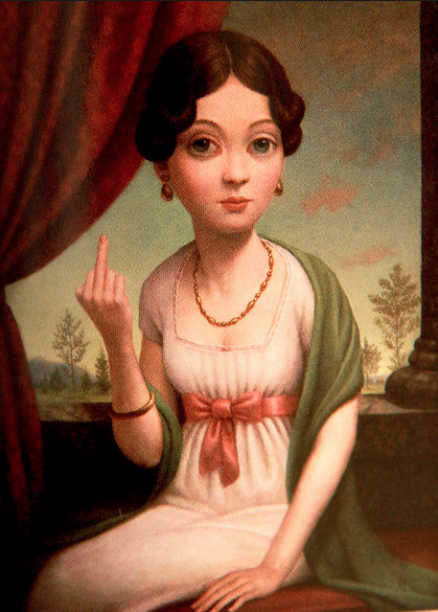 I don’t think this is a Walter Keane, but it would be funny if it were.

The bigger question is: at what point do we care about whether a film such as Big Eyes tells the truth? Should we want to know more about the Keane’s story? Are we satisfied that a megalomaniacal husband with no artistic talent in his bones psychologically abusing his talented wife, using her work as his own to acquire wealth and prestige on their behalf, gets ultimate justice in the end? It’s awfully simple. 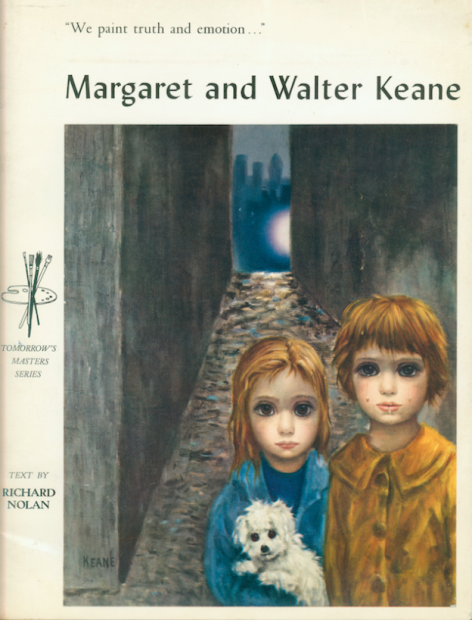 Perhaps the film is a metaphor for the oppressive patriarchal culture that dominated the art world of the 1950s and 60s. Or maybe it begins to validate the world of kitsch and fringe artists within the confines of establishment artists like Franz Kline in the gallery across the street. Maybe it’s about the relationship between the hype behind such art — the mystique being part of the product. Or maybe it’s about Tim Burton flexing new muscle for himself and his career within the confines of the big movie studio system (one that is less and less about nuance) and/or simply making a tribute film for his inspirational crush. For those looking to constantly sharpen their edges, it’s probably all of the above and more. Knowing that any film based in truth is a presentation of sifted facts and embellishments, Big Eyes leaves quite a few gaping questions that make a far more interesting story than the film itself.

Hey, John. I’m impressed! I have no idea how you were invited to review this film, but you did an excellent job. The entire premise of the movie sounds strange. How would some female artist ever allow her husband into posing as the artist of her own creations? Then I remember how overly dominated some women allow themselves to become, especially back in the 50s & 60s. Your review makes me want to see the movie after all. Actually, I thought the big eyed children pictures all came out of Mexico until I heard about this movie. Good job, John!

I enjoyed the movie (although I wish there had been more “big eye” hallucinations), and I wouldn’t be surprised if it turned out to be highly fictionalized to fit into a convenient narrative (let’s face it, truth is rarely so clean). But long before I ever saw the movie, I had heard about the trial. And it is true that Walter failed to paint a big eye painting while Margaret succeeded. The movie makes it seem as if the trial happened shortly after they divorced in the 1960s, but it in fact happened 20 years later. Here’s a contemporary account: http://www.people.com/people/archive/article/0,,20093924,00.html