Bun B to Join Panel of Scholars at Menil Tomorrow 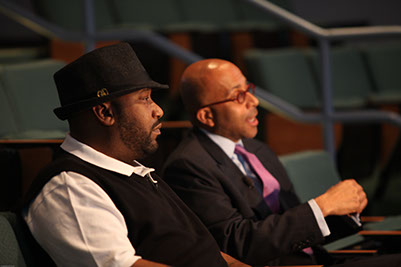 In conjunction with the Experiments with Truth: Gandhi and Images of Nonviolence, Houston’s Menil Collection will present a panel discussion called “The Influence of Gandhi and King on Hip-Hop Culture” at 7pm tomorrow evening, January 13. Rice University’s Anthony Pinn (Agnes Cullen Arnold Professor of Humanities and professor of religious studies) and Houston rapper Bun B (known by Rice U. as Bernard “Bun B” Freeman, the Center for Engaged Research and Collaborative Learning’s Distinguished Lecturer), will be joined by Monica Miller (assistant professor of religion and Africana studies at Lehigh University) and “others to be announced.”

Rice students already know that Bun B is up to the job; he has been teaching a popular course with Pinn on Religion and Hip Hop Culture at Rice since 2011. Tuesday’s panel will explore the hip-hop genre’s contribution to nonviolence and social justice.