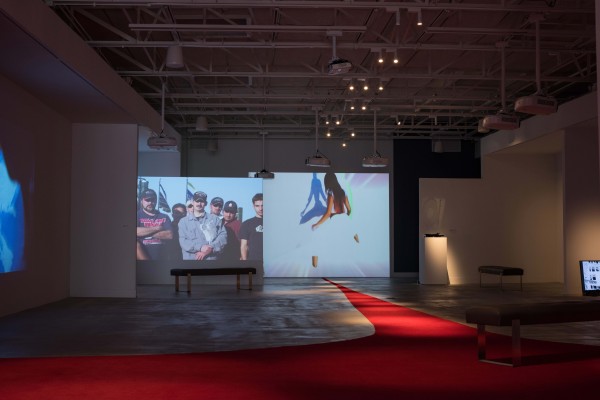 Lauren Woods’ powerful video and sound exhibition at Zhulong Gallery addresses issues of identity and representation of the black body in both historic and contemporary media. To say that Woods’ work is about race, or even race relations, overly simplifies her conceptual rigor. While the work is accessible to the average viewer, it has layers of historical, socio-cultural and musical references that are worth the time to decode, and although the work spans the past ten-plus years of her work, all the political content still resonates.

Woods received her MFA from the San Francisco Art Institute, and was trained in both traditional filmmaking and video. I asked her where she situates her work within these two genres. She considers her work a hybrid, using the video elements of loop and slow motion to rupture linear time. She also uses both appropriated footage and original footage.

The exhibition includes twelve video installations, a sculpture and three sound works. Outside the gallery door is a red carpet welcoming visitors, and it continues into the gallery throughout its interior length. It’s Woods’ site-specific work titled A Trample Upon These Tinted Splendors; the obvious connotation is the play on celebrity, and the red carpet also serves as a navigational device leading viewers through the show. 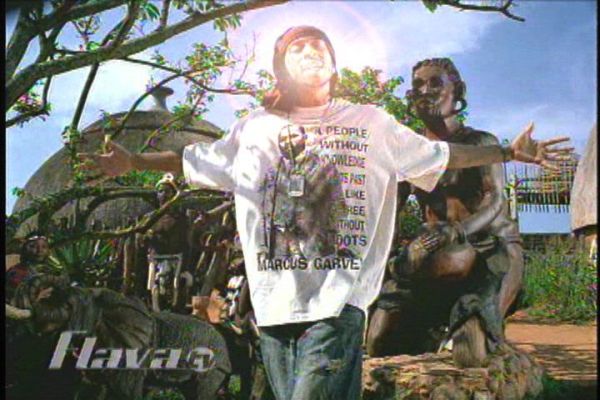 The first video, …all over (After the Crucifixion (After P. Pfeiffer (After F. Bacon))) is a short two-second loop of rapper Ludacris in his music video Pimpin’ All Over the World. Woods has looped the moment Ludacris extends his arms in a crucifixion-like stance. I’m not sure which is (or, rather, is meant to be) more offensive: the song’s knowing objectification of women or the (also knowing) kitsch, faux-African tribal backgrounds. Confounding the easy interpretation of celebrities as gods, Ludacris’ t-shirt bears a quote from Jamaican political leader Marcus Garvey: “People without knowledge are like trees without roots.” These paradoxical moments are a theme in Woods’ work. There’s an art-world nod to video artist Paul Pfeiffer, whose video works of NBA players have similar looping iconic figures and Biblical references (i.e:. Four Horsemen of the Apocalypse from 2006). 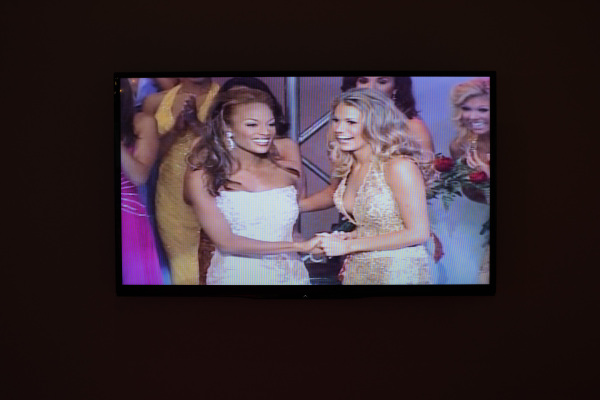 Another work, The Teenth of June, Part 1, features the moment when Shilah Phillips was the first black woman awarded the title of Miss Texas, in 2006. Woods slowed down the footage, extending a few seconds to seven minutes; we see the event unfold frame by frame. The soundtrack, a remixed version of the theme song from Invasion of the Body Snatchers adds a bit of dark humor. The title references African American Independence Day.

One of my favorite videos, Inkblot Projective #2, depicts a crowd of men at the port of San Francisco intently watching a black male street dancer. Woods uses a mirroring technique to warp the dancer’s body, so that he resembles a moving, morphing Rorschach test. And he is, because I interpreted the crowd as threatening, perhaps suggesting a lynch mob. But they are, in fact, gay men looking with desire at the dancer. 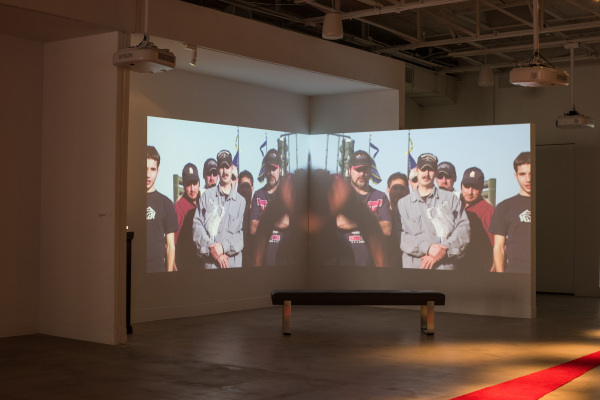 In addition to the video installations, Woods has installed three sound interventions. Positioned in strategic corners of the gallery are turntables ready with records. The viewer has to activate the work by placing the needle on the vinyl, and I experimented playing one record at a time, but then turned on all three simultaneously. The sounds together transformed the gallery into a confrontational space. Here’s what I heard: In The Evidence of Things Unseen #2, a male voice repeatedly reads a phrase from George Zimmerman’s written statement to the Sanford police: “You’re gonna die tonight motherfucker.” In The Evidence of Things #1, a male voice—from an  excerpt from the State of Missouri vs. Darren Wilson grand jury transcript—reads: “You are too much of a pussy to shoot me.” The third record is sound from a recording by Ramsey Orta—the man who videotaped Eric Garner’s death—taken from the horrific policing event.

The voices rupture and shift the viewing experience, morphing the videos’ context into a more politicized zone. I appreciate Woods’ decision to use analog technology for the sound works; the pun on the word “record” as both a listening device and an archive or document for recording history works well to situate the content both historically and in contemporary culture. I think it’s also important that the viewer has to “set in motion” the sound, symbolizing complicity.

Woods describes her work as ethno-fictive; i.e., she uses elements from the social science of ethnography while taking creative liberties. She constantly mines film archives as well as doing her own shooting, and archives her footage for use in future projects. The idea of creative ethnography reminds me of Coco Fusco’s pivotal book Only Skin Deep: Changing Visions of the American Self, which comprehensively examines race through the history of photography. Woods adapts this perspective and projects her own critical eye toward film and moving image. Her work challenges us to question our own notions of representation/mis-representation in the media and in film.