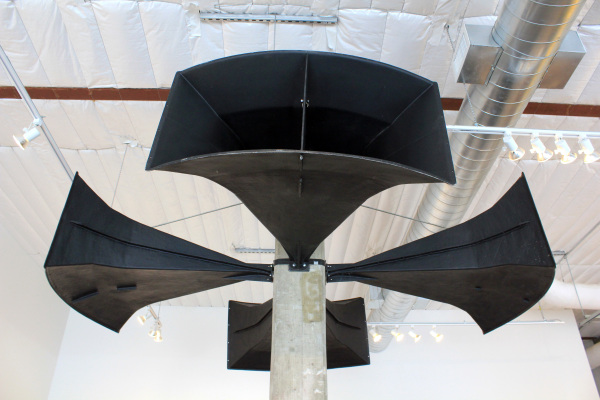 Barna Kantor’s solo show at Big Medium overcomes the gimmicks of Op Art. Rather than producing illusions that fool the eye for the sake of visual interest, Kantor uses illusion to deconstruct the process of observation. Not in a “nothing is genuine” sort of way, but in a smiling exposure of the elegant mechanics of our senses. Unlike much of the genre within which he works, Kantor manages to sustain that magic moment when the viewer hasn’t yet sorted out the physical nature of what they are seeing.

About a third of the exhibition is occupied by Kantor’s OneRPM series: various wall-based framed fields, each with a set of metal forms attached to hidden clockwork which spin one rotation per minute. The metal with few exceptions takes the form of three or four radial tines attached at one end. Each OneRPM piece takes on its own personality: one’s tine sets will be synced, another’s will not; one will have a mix of clockwise and counter-clockwise rotation, another won’t; one has a fluid sweeping motion while another uses a quivering start-stop ticking action. And within each work, the elements rotate to form triangular, rectangular, or hexagonal patterns that appear and disappear, from perfect order to unrecognizable static and back again. It’s odd to feel the moment that the pattern jumps out and becomes recognizable, and the moment it ceases to exist. The work goes beyond recognizing this as a simple product of placement and rhythm, because these two are always present despite the pattern strobing in and out of reality. Instead the pattern becomes a product of our ability to recognize it and to find the gestalt. 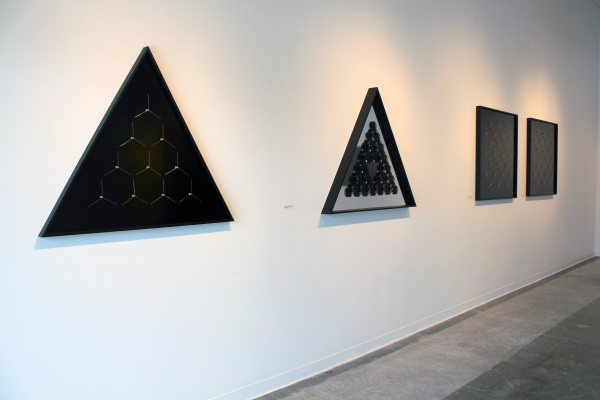 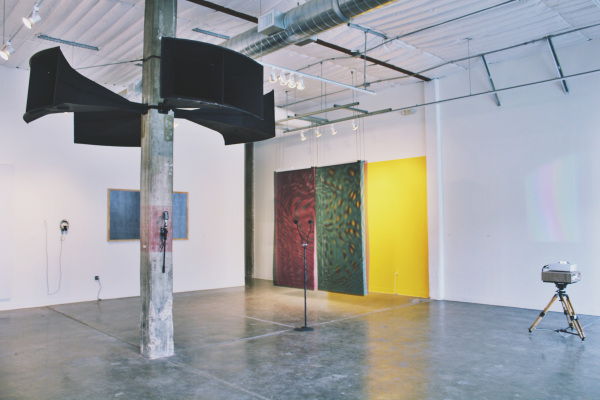 The loudest work in 40Hz is literally the quietest. In We are Free, Kantor plays with a different sort of pattern recognition. Four gargantuan bull-horn public-address loudspeakers are strapped overhead to a concrete gallery pillar in the middle of the room. A vintage polished steel microphone extends out from the pillar. Despite knowing that speaking into the mike is potentially dangerously loud, one has to try; the speakers and microphone together tempt the inner child in even the most jaded critic. It’s easy to imagine a soft hello turning into a godlike pronouncement, shattering the front glass wall of the gallery with its acoustic might. Of course, that does not happen. Instead, nothing happens. The pattern set up by recognition and expectation falls apart.

For another piece, Kantor has positioned two bright LED lights on a stand about a foot and a half apart at eye level; they shine horizontally toward the wall, into a metallic reflective surface covered in a small checkerboard pattern of black squares. From different angles and distances the look of the surface changes drastically. It’s flat on the oblique angles, but takes on shimmering colors and light as the viewer moves closer to perpendicular with the wall. The viewer becomes the subject of the work, reflected in the surface. And if the viewer stands directly between the lights, which is suggested by their positioning, the reflection of the lights themselves dissolves over the entire field. The view from this perspective is something akin to looking into a big screen HD TV tuned to muted static thrown through a filter of mercurial shimmering color. The piece brings the viewer back to OneRPM ‘s theme that experience is not a product of the state of things, but a product of a perspective state. 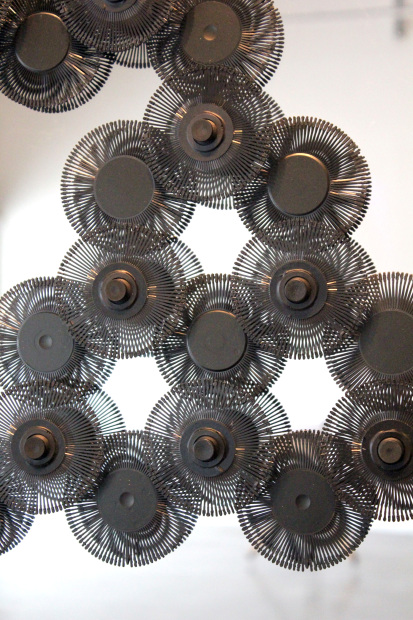 Couple leaving the Beach breaks down our perception of color in a different way. Using a digital light processing projector, Kantor shows silhouettes of individuals on a beach. The standard DLP projector operates by rapidly firing monochromatic images in three colors, one after the next, that the human eye and mind perceives as a single moving full-color image. Kantor manipulates that perception the analog way: by shooting the projection through a fan attached to a rheostat which controls the speed of the blades. The artist dials in the speed so that different sections of color are blocked out at the correct time. The result is a slowly rotating luminescent rainbow effect in the “whites” of the projected image. Additionally, the inverse colors show up on the slanted blades of the fan and create an almost holographic display directly in front of the projection. Instead of creating something eye-catching or beautiful by constructing a new illusion, Kantor has done so by deconstructing an everyday one.

In the powerful piece Adding by Subtracting, large sheets of magenta, cyan, and black hang over a bright yellow rectangle painted on the wall. The sheets are pierced with varying small patterns, which makes it possible to see each plane through the first. Viewed together, a new pattern emerges of much larger yellow bulging hexagon shapes that shift with each step. Again, Kantor toys with the human propensity to rationalize what the senses relay, to take distinct elements and stitch them together into a whole. The hexagons do not exist, but the viewer picks them up nonetheless because it is a simpler way to organize the complex amalgam of visual information presented. 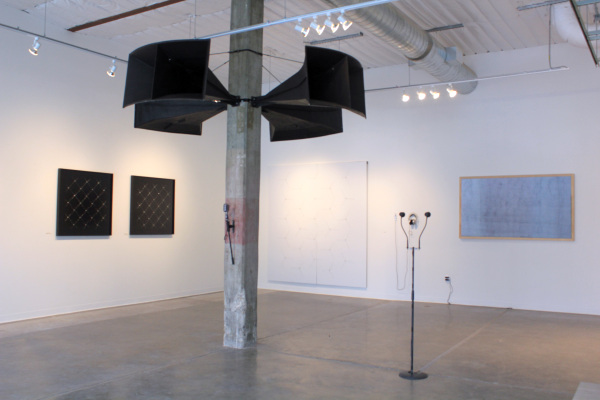 40Hz is an apt name for the show. Forty is a magic number in neuroscience (not that any self-respecting scientist would say so). Zapped with this frequency of electrical gamma wave, the sleeping mind can be jolted into lucid dreaming, and the frequency seems to allow human brains to sort out complex data into discrete combined packages of information, despite a lack of direct physical connection between nerve cells. 40Hz is theorized to provide the unity of cognitive experience itself. The idea that pattern recognition is not solely an aspect of visual interpretation but also of experiential sorting—and that these two are operated by the same mechanism in 40Hz—pushes Kantor’s theme onto a much larger stage than simple illusory fun. The title of the show serves as another piece in the exhibition, a doorway to a neuroscientific labyrinth of research and discovery that augments the proto-cinematic experience of Kantor’s works.