The Black Guys: Dish it Out

When I first heard about The Black Guys at Art League Houston, I’ll admit it: I rolled my eyes. Wow! Two guys redoing old Art Guys performances, except they’re black! What a revelation!

But after I checked my cynicism at the door, I thought again about what it means to redo anything as a black man, but particularly as a black male artist. What does it mean to be constantly carrying a pile of other peoples’ assumptions on one’s shoulders? As a black artist, how does one grapple with, use, or deny his inherited history—a rich, dense, complex, beautiful, acidic, acerbic history—a history that cannot and really shouldn’t stop resurfacing? 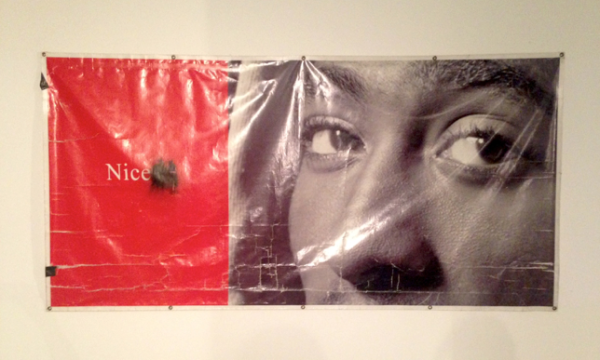 With that in mind, Robert Hodge’s and Phillip Pyle II’s The Black Guys seemed much less gimmicky and a lot more pointed. Over the years, The Art Guys have done a bunch of performances, so The Black Guys had plenty to choose from. The performances they chose to remake seemed all the more pertinent, and their decision to redo Dish it Out! was a particularly intelligent move.

The original Dish it Out! occurred in 2012, where Michael Galbeath and Jack Massing made their heads part of the buffet during the opening of James Surls’ Second Annual Studio Exhibition in Carbondale, Colorado. To be totally clear, I did not attend the original Art Guys rendition. But from images and online research, as their heads sat on stark white plates, their necks surrounded by green leaves and supple grapes, a nice floral arrangement between them, it appears that Dish it Out! followed The Art Guys’ modus operandi of meditative, absurdist, fuck-you performances regarding the stuffy bullshit rituals that nevertheless grease the art world machine. 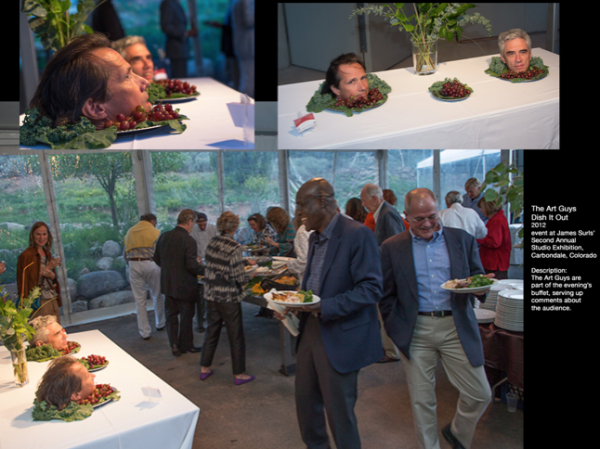 Images of the original Dish it Out!, from theartguys.com

Two years later, The Black Guys are essentially doing the same thing; but for better and for worse, it takes an entirely different set of meanings because Hodge and Pyle are black. Frankly, the ways The Black Guys use their skin color to change Dish it Out are brilliant. Decapitated, incapacitated, Hodge and Pyle face their audience—consumers of their art, of their food—in subservience. But their voices and faces aren’t incapacitated: as we grab things to eat, they confront us directly, directly with smiles and suggestions about how good the cornbread is. Even in conviviality, we both feel confronted, we both feel on trial. 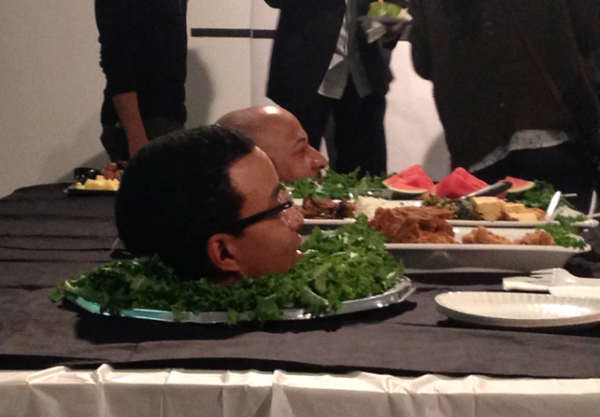 The Black Guys rendition of Dish it Out!

The food here is stereotypically black: fried chicken, greens, watermelon, cornbread, kool-aid, to name a few. (It was delicious. I drank five cups of kool-aid.) Although using stereotypical food feels more contrived and obvious than Hodge’s and Pyle’s heads on plates, the way it was displayed elevates it, and actually elevates the entire exhibition beyond race. While the original performance had a neutral floral arrangement between both men’s heads, Hodge and Pyle have an innocuous cardboard card thanking their friend Scott Peveto. Apparently Peveto cooked everything in the performance except the fried chicken. As I looked around, I noticed a community of people genuinely enjoying each other’s time. It became clear then that The Black Guys isn’t a two-man show: it’s a community effort. 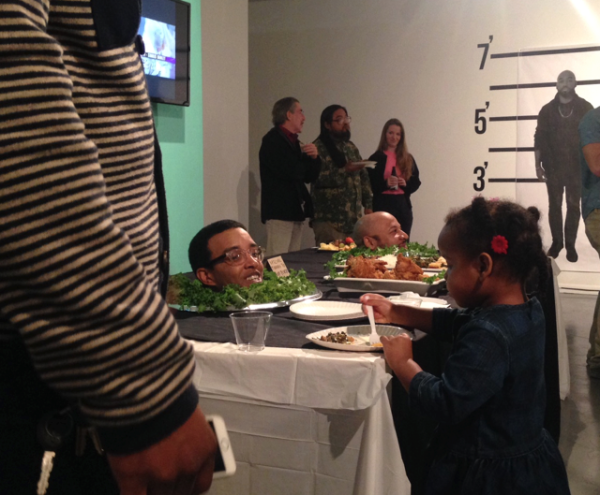 Cute kid with The Black Guys

I didn’t see 24 HRS, another one of their performances, in person, although they do have it playing on loop in the gallery. Based on the video, I suspect that this is what makes The Black Guys truly unique, and how they are making their homage to The Art Guys their own, which is how they incorporate, include, and express the care they have for their community within the Third Ward. It’s a smart and powerful way of making their work not only pointed and incisive, but also loving and iconically Houston, much like The Art Guys themselves. 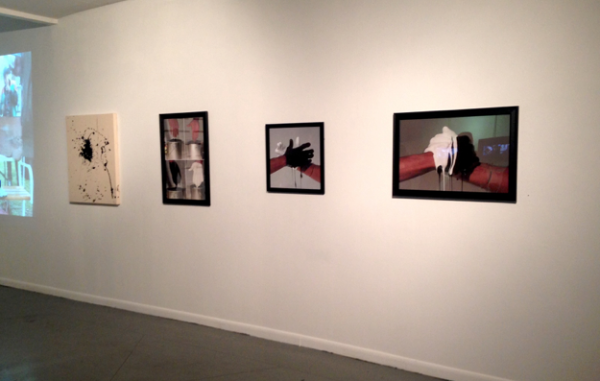 If there was one glaring error in the performance, it was the fried chicken, which came from KFC. Everyone knows the best fried chicken comes from Popeyes. Other than that, it was biting, convivial, uncomfortable, and delicious. I think Michael Galbreth walked out of the gallery around the same time I did. I wonder what he thought of it?

Michael was on his way to Frenchy’s…