Eric Fischl at the Modern Art Museum of Fort Worth 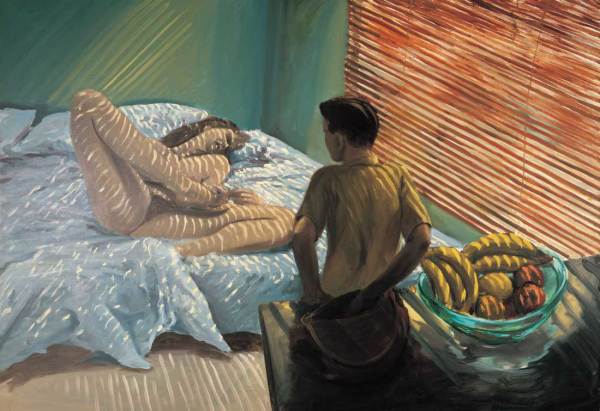 The Tuesday Evenings At The Modern lecture series on November 11 gave the audience a great opportunity to hear Eric Fischl speak, and we came with appetites to hear from the artist directly of his well-known work and history.

What many of us sought was not the Fischl menu with which we were familiar. We come hoping for those fascinating “secret recipe” anecdotes that tell us how a cook became a famous five-star chef.

Fischl opened the lecture with the story of one of his first Big Moments, in which an exhibition curated by Jean-Christophe Ammann more or less propelled him from being just one of “Seventeen Artists” at the Vancouver Art Gallery in 1976, to inclusion two years later in “Neun Kanadische Kunstler” at Kunsthalle Basel, Switzerland. Everyone knows that restaurant food is more exclusive and better when the menu isn’t printed in English.

He described Ammann as his mentor and patron, who returned to Fischl’s New York studio in the formative period of Sleepwalker, which he completed in 1979. As Fischl recalled the visit, he said: “He [Ammann] was a handwringer. He was chuffing around my studio wringing his hands, and muttering statements like ‘This is bad. This is wrong. This is no good… .” And that after some specific pronouncements on just what was ‘bad’ about a masturbating teen standing ankle deep in a child’s wading pool, Ammann then just walked out. More than just a story was Fischl’s revelation about this serving of cold fish:

“Every artist has a list of things that they fear is wrong with themselves or their art. If a critic criticizes the art, and gives a list of wrongs with which the artist doesn’t agree with, then you just shrug your shoulders and insist that if they have a problem, then it’s their problem.” But Fischl confessed that: “I had a list of seven or eight things which I thought in my gut were wrong with Sleepwalker, and he hit every single one of them! So then you have to sit down and do a reality check, because you know that there is some—or a lot—of truth in what was said… .”

In Fischl’s case, his resolve wasn’t to eliminate the figure or change the sexual overtone. As he summarized it, he just “fixed the elbow.” And where that painting is concerned, the rest is history. 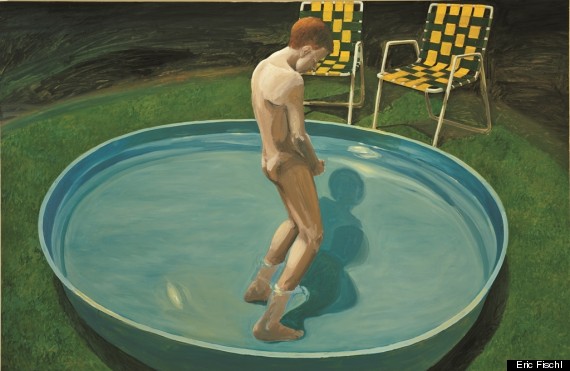 As expected, Fischl spoke of his intent to make “Bad” sexually inappropriate paintings with a capital B. But more surprising was his continued passionate admission to being at heart an Abstract Expressionist, caught up in the grandiose gesture of the making of marks and seeking that moment of perfection which arrives through the intuitive process.

And I’ll confess that the Modern’s current exhibition, Urban Theater: New York Art in the 80s, was my first direct exposure to the physical painting Bad Boy (1981), the sequel to Sleepwalker. If one continues the food analogy: both paintings are a pair of bookends holding up the cookbook series on how to serve up sexually charged “bad boy” paintings.

Kudos to curator Michael Auping for putting this work in the show. And my own revelation? It’s better in real life, but also worse. It’s “bad” in that the work lacks the creamy painting technique of later Fischl works such as Self Portrait (1998), or the effortless mark making of his great monograph printing series where swipes of ink coalesce into figures. 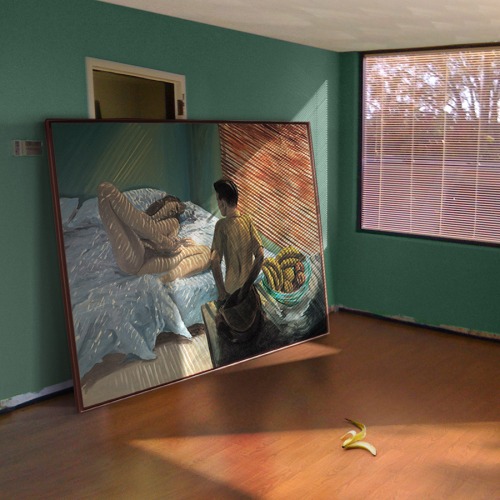 It’s good, in that in first-hand observation, I thrill to see the rawness of spontaneous marks that from the distance become stripes of lemon yellow highlight on a yellow ochre banana. What’s bad—and I can’t believe I never ever noticed this—is that the venetian blinds don’t follow perspective one whit, but instead angle as isometric parallel lines up the canvas, creating a trapezoidal compositional device instead of a believable window.

What’s good is the reality that this artwork is less about the picture window, and one hundred percent about the picture plane and marks on its surface, as well as a sacrificial offering of flesh to the gods of process that created Ab-Ex.

This realization was stressed by Fischl in what I’ll call his Great Tale of Not Knowing What Will Happen While I Paint. I believe it rings true, as evidenced in his latest work shown in the lecture. Regarding Bad Boy, he spoke again of the compositional intuitive process, in not preplanning his figures but allowing them to move across and offstage at whim (i.e, first painting a man next to the woman, then eliminating the man and rolling the woman over to lay next to a baby, which changes “post coital” content to “maternal,” and then “throwing out the baby with the bathwater” to end up with a teen implicated in an explicit sexual invitation fantasy/reality). It becomes a kind of private performance art, semi-absolving the artist of being a “bad boy” even as he admitted his initial goal was to present sexual impropriety for shock value.

That explanation—it’s not my fault a woman is exposing herself to a boy, I’m just the painting what the voice of the painting tells me—always seemed like a bit of magical misdirection. Granted, Manet did give the critics a “naked woman” instead of a goddess in Olympia, and de Kooning didn’t shy away from body parts, slathering paint into curvaceous Rubenesque women, whom Sister Wendy described as: “huge creatures with their great balloons of pneumatic mountains of breasts… .”

In artistic interpretation of Bad Boy’s content, having the boy slip his hand into a purse opening which is too coincidentally shaped like a vaginal slash merely confirms what Fischl quoted in his lecture: “Whooo—let’s make a ‘bad’ painting!”

But in retrospect of the lecture, perhaps the real Bad in Bad Boy—both the painting and artist’s moniker—resides in not how or why they are painted, but in the conflict that a sexual narrative of people occupying physical space can’t really coexist with the “purity” of Abstract Expressionism.

Fischl noted of his current work his insistence (or justification?) that the camera, not the artist, records spontaneous awkward body posturing. Regarding his Art Fair paintings, one recalls Norman Rockwell’s painting of the man in front of a Pollock painting, titled The Connoisseur (1962). The Art Fair  paintings actually function very well compositionally, because his settings are shallow like settings of Fairfield Porter, and what depth we see is conveyed by foreshortening instead of (inaccurate) linear perspective of beds and venetian blinds. Fischl also spoke of Photoshop as a labor-saving device, eliminating the tedious manual labor of the figurative trial and error in Bad Boy. 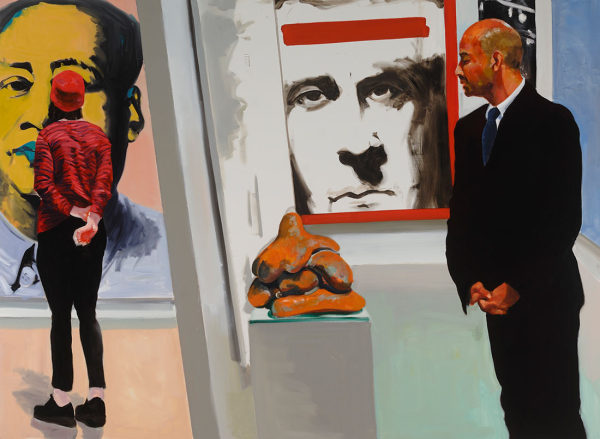 Then it dawned on me: Fischl was “Photoshop collaging”  his artwork long before digital Photoshop was invented. All of his early Glassine paintings evoke “bad” clip-arty arrangements of figures who never relate to the settings or space or often each other. In the past I’ve associated Fischl’s work with the flat, abstracted figures of Manet, but really, he’s Cezanne of the tilted table which cannot support a levitating horizontal plate of bread! Or in the Glassine work below, side-view figures somehow reside on tables whose eye level doesn’t match with a stool or chair.  Look again at the perspective of Bad Boy’s bed versus the foreground banana table, against the foreshortening and plane of the reclining nude. Bad Bad Boy. 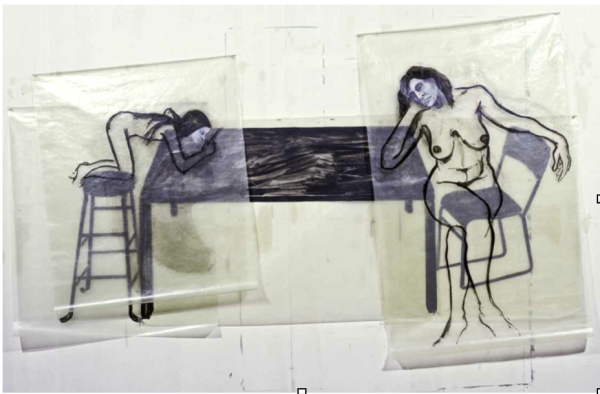 What I most enjoyed about the exhibition was seeing Fischl’s work in comparison to his Urban Theater gallery mates, Francisco Clemente and David Salle, where the inaccuracies Fischl’s painting suddenly make more sense. Clemente used the figure as merely a coat hanger upon which to drape a coat of paint. I’ve never thought of Fischl in that manner; I was unable to get beyond the provocative substance to see the surface. I’ve not had that issue with the intellectualized formal design of Salle’s arrangements, singularly of line and shape on a two-dimensional surface. Now I realize after the brief intentional shock of genital flesh, Fischl’s painterly bananas are only intended to be banana-skin deep.

I found “Bad Boy” to be the most compelling work in the exhibition. It was the only work I returned to for a second look before departing. I truly wish the curator had been able to secure a loan of the earlier “Sleepwalker” and shown them together. And speaking of curation: The exhibition seemed unreasonably focused on Keith Haring.

“Bad Boy” was the first Fischl work I ever saw. Certainly, I must’ve been drawn to the exciting psychological ickiness of it but, decades later, it stays with me in a much more benign way. When the sun comes through my shades in that way that throws stripes of light across my bedroom wall, the first thing I call out in the morning is “Fischl!”