Zip – Up! Menil Gets NEA Grant for Upcoming Newman Show 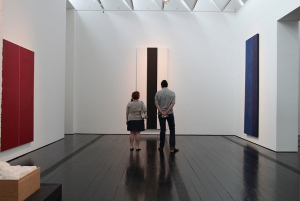 The National Endowment for the Arts has awarded the Menil Collection $65,000 to support Barnett Newman: The Late Work, scheduled for March 27 – August 2, 2015.The exhibition, curated jointly by curator Michelle White and Menil chief conservator Brad Epley, is the first to focus closely on the artist’s work during his last five and a half years (1965-70).

In the last decade, the Menil has undertaken significant technical studies of Newman’s work, including Epley’s multi-year effort to restore Newman’s Be I (First Version), and the exhibition is an outgrowth of these projects. Said Epley, “conservation work can be revelatory about paintings, allowing us to understand not only process but meaning. This is certainly the case with Barnett Newman, who worked out his ideas on the canvas itself, without making preparatory studies. This generous grant from the NEA will help substantially to bring our findings to museumgoers and scholars alike.”