Jennie Ottinger at The Reading Room 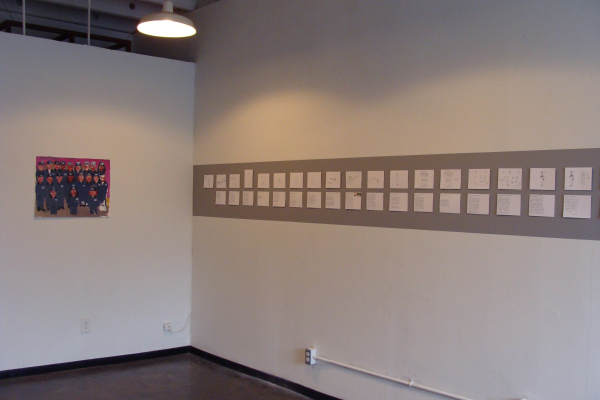 San Francisco artist Jennie Ottinger’s exhibition Postal Mortem at the Reading Room in Dallas identifies the post office as a not-so-recent addition to the endangered species list. (With the instantaneous nature of digital communication like Twitter, Instagram and texting, even email may be on its way out.) While the exhibition looks unassuming, its intent is oddly ambitious: to make a case that for the sake of some kinds of meaningful communication, the post office and its mail system should be saved.

Ottinger created 21 postcards, each featuring a simple line drawing on the front with a message and subject on the back. Each card has a headline that reads, “A conversation you could have through the mail.” She mailed two cards a week to 600 people around the world, encouraging them to respond via snail mail, and many of them did, for an ongoing conversation.

As someone who loves receiving mail through a letter box (minus the junk mail and bills), I imagine each receiver anxiously awaiting the arrival of her/his next postcard. Each card dialogue cultivated its own distinct personality, showcasing all kinds of handwriting and print styles. The cards skip typical “wish you were here” messages altogether. 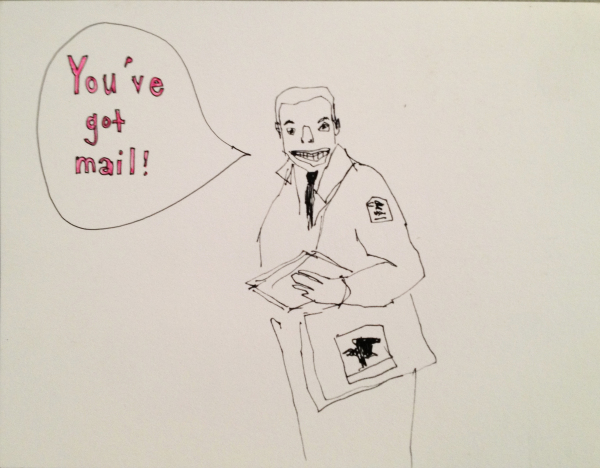 Unfolding on the walls of the gallery are conversations around cranky dinosaurs writing to the asteroid, a philosophical letter to wine, a dog making his case with some fleas, and helpful advice to the mail carriers. “HEY ASTROID, YOU’RE GETTING A LITTLE CLOSE THERE BUDDY. HOW ‘BOUT YOU BACK IT UP AND NO ONE GETS HURT. KNOW WHAT I MEAN? SIGNED THE DINOSAURS,” and,  “Dear Fleas, I would greatly appreciate it if you would kindly refrain from biting. At the very least, would you mind terribly not having 500 babies in my fur. I find babies charming as well, but 500 is a bit excessive, don’t you think?”  Here’s an excerpt from the Dear Wine note (written in script), “…You run with an influential crowd—Jesus, Caligula, Orson Welles, The Coppolas… .” 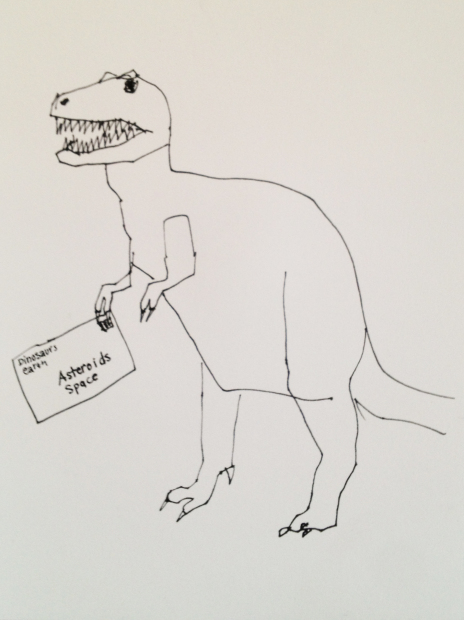 Ottinger describes these messages as Twitter-ish/Instagram-eque feeds, but perhaps she’s making the comparison to attract younger viewers to the project. I feel it’s a disservice to marginalize the work in this way. Ottinger’s wit and diligence contradicts the notion of a random or spur-of-the-moment Tweet. These carefully constructed letters humorously address different aspects of life and culture from a myriad of perspectives and have an unfolding, deeper impact—not a navel-gazing or narcissistic narrowness often associated with newer social media. 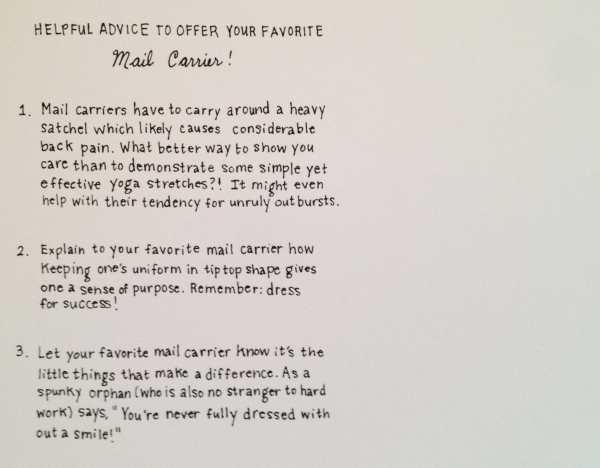 Postal Mortem is part of a long tradition of mail art/correspondence art. Emerging from the 1960’s Fluxus Movement, mail art became an alternative art practice, as a way to engage the community and collaborate on ideas. Ray Johnson, who is considered the pioneer of mail art, often mined telephone conversations and the mass media of his time to highlight the collision of disparate textual and visual information. Ottinger continues this convention, but rather than bombarding us with information, the artist distills it into a succinct, uncluttered form.

Another Fluxus/mail art tenet is the erasure of boundaries between art and life with a healthy dose of absurdity, and Ottinger’s work embraces this tone. She acknowledges the futility of attempting to save a huge organization with such feeble means. She makes her case by simply providing a small but worldwide community with the pleasure of receiving and sending real mail through the post. It may not sell everyone on the merits of snail mail, but consider her words of advice:

“Things the N.S.A. won’t read: letters. Things the N.S.A. will read: email. If you were to write a poem about say explosives and email it to a friend, a bureaucrat will probably read it and become extremely concerned. Should you compromise your artistic integrity and cease your dyn-o-mite poetry? Of course not. Why don’t you write it in a letter and mail it instead?”