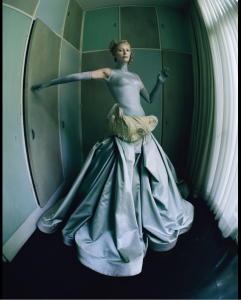 For the third installment in a series of globe-trotting portfolios shot for W Magazine, humanoid space alien/Orlando/wonder woman Tilda Swinton descended on The Menil Collection in Houston a couple of months back to shoot a fashion spread based vaguely on a surrealist theme. The issue is hitting stands soon and the magazine’s website offers a sneak peak of sorts.

In a nod to the collecting and style tastes of the museum’s founders Dominique and John de Menil, Swinton is pictured swanning around in the museum and the de Menil’s Houston residence wearing new Balenciaga, Delpozo, and Carolina Herrera; the artworks themselves, by Max Ernst, Joseph Sacco, paleolithic carvings, etc., act as sort of glorified set props.  Judge for yourself here.

On Institutional Cowardice: The Menil Collection