Baytown Artist on Mission to Paint Every Texan Fallen Soldier

On Thursday evening at 7pm, on the show Arts InSight, Houston Public Media will feature Baytown artist Ken “The Dauber” Pridgeon, who is attempting to paint portraits of every Texan soldier lost in the wars in Iraq and Afghanistan. 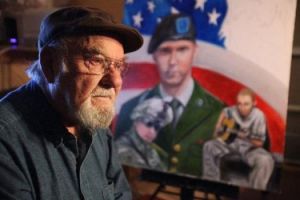 In his youth, Pridgeon spent ten years in the Air Force before becoming a billboard painter, and making his own paintings at night after work. He’s a well-known local painter of landscapes and nature scenes, with a number of murals in the Baytown area. But, in 2010, he was asked to paint a portrait of a fallen soldier during a fundraiser and before he finished it, someone tapped him on the shoulder and told him he would have to paint a portrait of another local soldier who had just died a few days earlier. Pridgeon was sucked into the project; word spread and now he has painted well over 150 of the portraits. Eventually, the Portrait of a Warrior Memorial Art Gallery opened in Baytown, although it already running out of room.

Pridgeon told the Texas Observer, “See, I have a problem…So I said I was going to do 500, that’s when we had 500. Now we got even more.” He added, “I just knocked them out, because I told people I was just going to do as many as I could live to do. I’ve been blessed with good health the last two years. But my goal is to do all of them.”

In the same interview, he shared his insights into the difficulties of veterans: “I paint the ones that died [in the U.S.] from suicide because they really died in Iraq and Afghanistan, okay? They were killed there. With the IEDs and their friends getting killed next to them and all that. They just came back to the United States, met their moms and dads, and then killed themselves. But they died there.”

In a clip from tomorrow night’s Arts InSight segment, Pridgeon also says, “People ask me, well, what are you gonna do when the war ends? I said, man, I’m gonna get out in the street and celebrate with everybody! What are you talking about? This war has lasted too long!”