Artifacts from Sun Ra’s D.I.Y. record label El Saturn in the 1950s and 60s on view at Rice Media Center 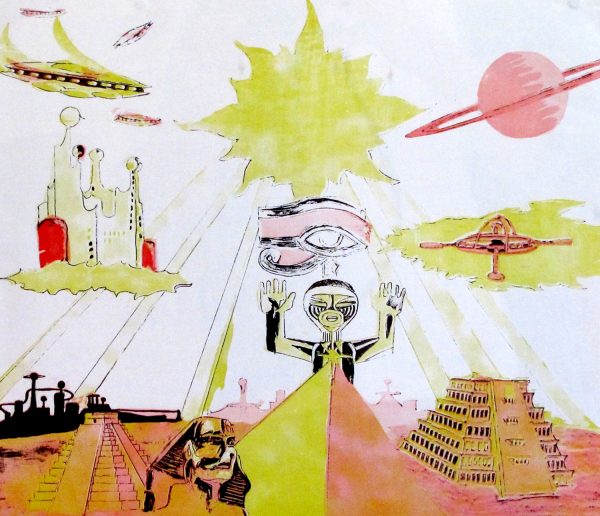 This year marks the 100th birthday of Sun Ra, sort of. Numerous celebratory performances, film screenings, and exhibitions have taken place locally and internationally to mark the occasion and celebrate the work of the pioneering composer, musician, bandleader, poet, mystic, and mind bender. Of course, these birthday parties have required some nuanced clarification. Since Ra claimed to have been not from Earth but from Saturn, many of these have been framed as centennial celebrations of his “arrival”–a word that can simultaneously refer to the birth of Earthling Herman “Sonny” Blount in Birmingham, Alabama in 1914 and nod to the less definable, otherworldly and timeless origins of his creative persona, Sun Ra. Really, the cultural and conceptual alchemy central to the complex artist’s life and work render such distinctions appropriately un-sort-out-able.

Both Ra’s musical concoctions and the ever-present nexus of signifiers surrounding it supported a fundamental message of reorientation toward “the other.” His playful use of language (in titling, poetry, and sometimes lyrics) and continual integration of peripheral elements (visual art, costumes, film projections, etc.) cannot be separated from the music or his process, nor underestimated as vital invitations for passage aboard his sonic vessels bound for unseen worlds–other spaces, times, destinies. Ra’s far-out art required more than promotional audience-building, it required revolutionary reprogramming. 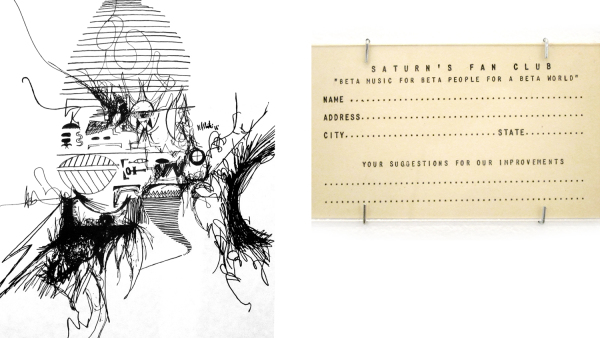 It was during his time in Chicago between the late-1940s and 60s that he adopted the Sun Ra identity, assembled the first of his Arkestra big bands, and began creating and disseminating his elaborate mythological messaging. The exhibition “Calling Planet Earth: The Graphic Cosmos of Sun Ra and El Saturn Records” (on view through Dec. 4th at the Rice Media Center Gallery in Houston) points in the direction of this formative, early period and focuses on artwork, graphics, and printed poetry created by Ra with his friend and business manager Alton Abraham and a loose group of largely non-professional visual artists for their artist-run record label El Saturn Records and its publishing wing, Ihnfinity Incorporated.

Curators John Corbett and Terri Kapsalis have collected here a number of rarely seen, original and unassembled working materials for LPs, publications, and promotional items (as well as some later photographs) that were acquired from the personal collection of Alton Abraham. Perhaps best approached as archeological findings, the work in the show provides great glimpses at an all-too-rarely considered history–the beginnings of the Ra omniverse, a pre-history of all that could later be considered Afro-Futurism, and a presage to a lot of other stuff.

These Ra artifacts– created via hand drawing, printmaking, and acetate layout–have funky, organic qualities and a mix of styles that, at first glance, may conjure associations with the D.I.Y. aesthetics of Black Panther Party materials made nearly a decade later or the Punk flyers and zines of two decades later. It’s interesting to see the homespun hustle in these early articulations of a grand and outlandish movement. The message may be from (and point to) outer spaces, but it was conjured and translated on the planet of Chicago, meant for communication with Earthlings, and made by a collective of outward-thinking, black artists and a community of local print shops.

The record art in the show features imagery mostly by relatively unknown artist Clyde Dangerfield, with a few things drawn or laid out by Ra himself. (Because of the fuzzy history of this collaborative endeavor, the show does not label the specific artists and years of the work.) Classic imagery, such as the orange block print cover art for My Brother The Wind, punctuates a bunch of total rarities, including a mysterious drawing likely by Clyde Dangerfield that depicts an alien, ships, and a cloud city above pyramids. The three-color cover of Sun Ra Visits Planet Earth is a surprisingly quaint bit of late-50s modern (though nice, and interesting for its indications of the specific Earth that Ra was visiting). In contrast, an alternate version of cover art for When Sun Comes Out, created five years later, reprises a bit of that imagery from Sun Ra Visits Planet Earth but this time places it inside a graphically bold superimposition of a flower and the sun in space. Four panels for The Soul Vibrations of Man LP reference astrology imagery, and are really much better here, assembled together on the wall, than they were in original form. The silkscreened cover of Universe In Blue is a graphic treatment of a photograph of Ra that would later don the cover of Rolling Stone magazine. 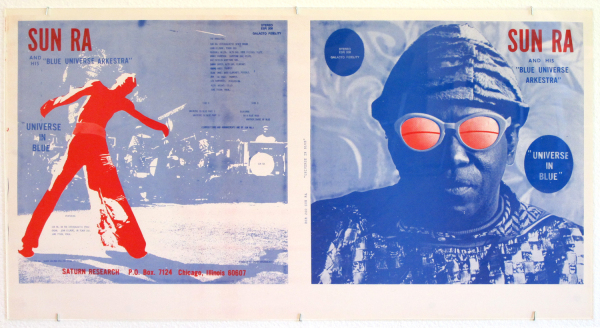 An important thread throughout the show is Ra’s language. His poems and proclamations float among graphic shapes, song titles, and personnel information on the record back-covers and sleeves. The original un-cut pages and covers for Ra’s first poetry collection, The Immeasurable Equation, are on display and worth exploration. It’s in his words that one begins to scratch the surface of Ra’s influences and style of reorganization. Through linguistic and phonetic wordplay, he unravels and interweaves astrological, historical, mathematical and mythological references. If you can take Ra’s collaged communications as both deeply serious and very funny at the same time, you’re there. Ra didn’t simply say what he meant, he conjured conundrumatics that sparked new meanings in other’s minds.

I particularly love the inclusion of a promotional letter–a nice work of hyperbolic promo-poetry, and the best summary of the Arkestra’s endeavors. While likely not very fruitful financially, this unusual treatment of business-as-art reveals something about Ra and Abraham’s collaborative running of the enterprise. Sharing phrases with “The Neglected Plane of Wisdom” (also on view), the announcement boasts that the “sun master of music” and his “sound ambassadors from the airy kingdom world tomorrow” can “lift dreams from nothing to reality” and bombard you with “living-cosmic-soul-force vibrations.” It then goes on to state that the band is available to play dances, nightclubs–even stag parties–and stipulates a cash and transportation guarantee. This is truly “Ihnfinity Incorporated.” 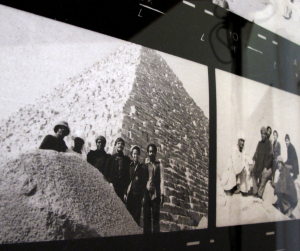 The show’s title, “Calling Planet Earth” references a song Ra first recorded for the 1963 Saturn release, When Sun Comes Out, and is a good springboard for materials from this period. Ra has just arrived, he has set his sights on this confused and self-constrained planet, and he and his cohorts are just beginning to articulate, through all Earth media available, a grand koan.

The exhibition “Calling Planet Earth: The Graphic Cosmos of Sun Ra and El Saturn Records” is currently on view at the Rice Media Center Gallery through December 4, 2014. Gallery hours are Monday through Friday, 9am – 4:30pm.

peter, would you call me some time. i have digital copies of
all the self-released sun-ra discs.
sandy has my phone number.

Hey Marvin. Thanks for connecting.