When I entered Cydonia’s inaugural exhibition Ex-Y: Representations of Contemporary Masculinity, much was as I feared it would be. I was greeted with a jaundiced modernist painting of suspect phallic shapes, ironic photos of a woman clothed followed by another one of her naked, schoolyard word play about “asses” and “bitches,” and a mechanical formalism attempting to reduce masculinity down to hard geometry. Rounding the corner from the entryway, however, I was pleasantly surprised to find more nuanced and powerful works that together comprised a thought-provoking exhibition. 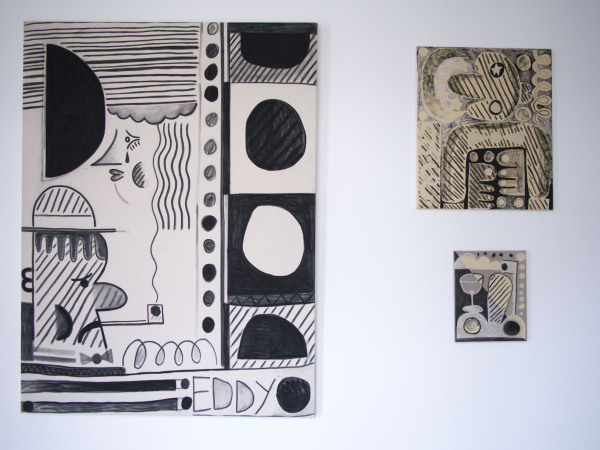 Strongest among these are a series of carefully crafted line drawings by Sybren Renema. Separated by works of hand written caps reading things like “I AM JUST GOING OUTSIDE AND MAY BE SOMETIME,” and “AT THAT MOMENT A SOMALI STEPPED FORWARD AND THREW HIS SPEAR SO AS TO PIERCE MY FACE,” I couldn’t make heads or tails of it, until I found that these drawings are only half the work, acting as a gallery-based link to a text tucked into the small exhibition catalogue. In addition to hanging in the gallery space, these drawings serve as illustrations for the quixotic narrative that follows the author through inebriated interactions with a temporary father figure described by Renema as “one of those beautiful relics of the British Empire, a man who refused to give in to 21st-century progress.” 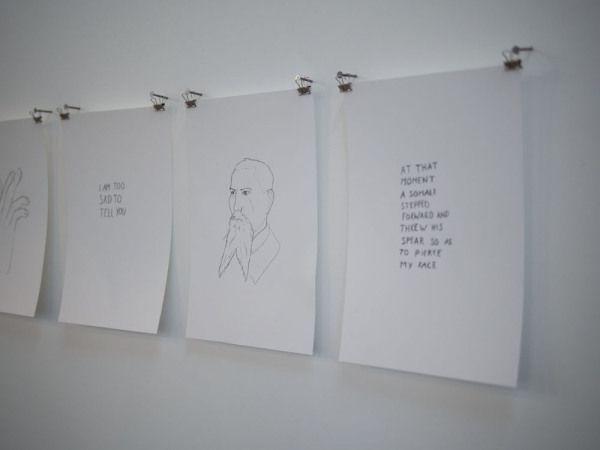 The winding story stitches together a number of curious lives including arctic explorer Captain Lawrence Oats, artist Bas Jan Ader (who vanished during a performance piece crossing the Atlantic in a perilously small dinghy), and writer and diplomat Richard Francis Burton who in the 19th century wrote extensively on sexuality and translated the Kama Sutra. In their own ways each of these men were, to use Renema’s words, “victims of their own myth,” a phrase that could just as easily be applied to contemporary masculinity on the grander scale – this generation being the victims of the myth built by our forefathers, and their fathers before them.

Renema catalogues his own happy initiation into that lineage of doomed masculinity through the patchwork text. Along the way there are brief jaunts into a unique brand of aristocratic chauvinism that’s still alive today, plus ritualized homosexuality, and of course, walrus os bacullum . Renema’s Amongst Explorers is certainly worth the read, one of the most interesting things I’ve read in months really, and far less dizzying than it sounds. 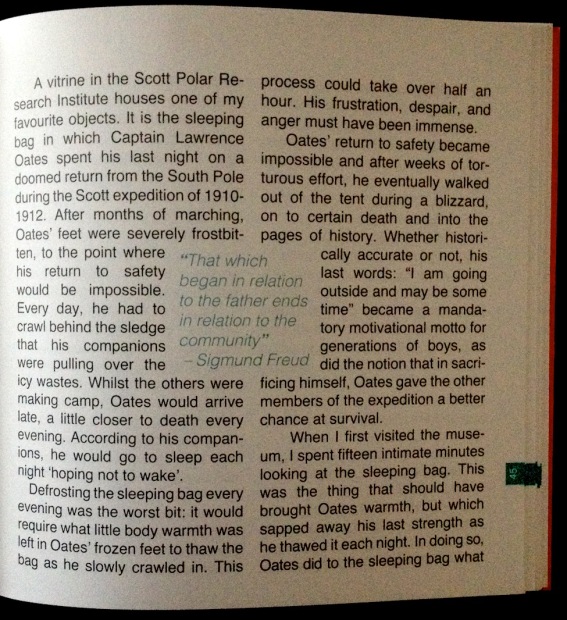 In Cydonia’s main space, contemporary masculinity is depicted as a state of begrudging participation in a ridiculous game run by archaic, nonsensical rules that lack any living author, but are essentially insurmountable and unchangeable. Here masculinity accepts these absurdities with a sigh; it is now about doing one’s best to win in the unfair bewildering competition one was plopped into. There’s less willful ignorance, earnest grand gestures, and blind machismo than previous generations, but the rules haven’t changed – just the level of awareness.

Through that lens, the male-dominated corporate world suddenly makes sense, with each player donning the costume and personality that might get them ahead. That combination of reluctance and effort are seen most prominently in Jan Mioduszewski’s Reka (Arm) in which during the opening the artist stood in the midst of the gallery in business attire holding a small board against the wall with his outstretched right arm. In contemporary masculinity (as in previous eras), virility and success are one in the same, and the artificially long limb (about five feet) the artist uses to support the board references that quite plainly. Thankfully, there are other more subtle aspects of the piece: first, the body and facial language of the artist, and secondly, the nature of the peculiar object he is supporting. 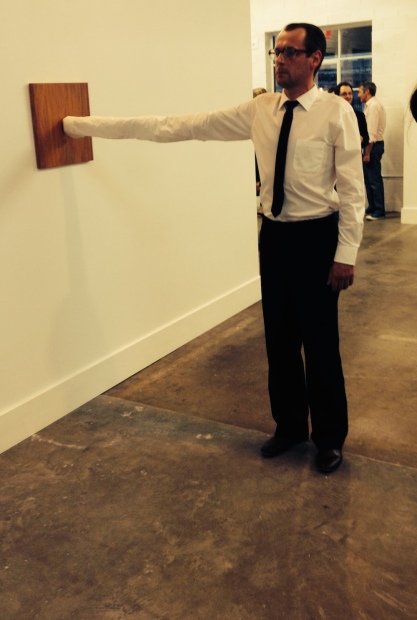 Instead of the prideful exterior of a businessman, the emotional tone of Mioduszewski conveys the doubt and the ho-hum disappointment of ladder climbing. The performer won’t hold eye contact and his posture is one of fatigue rather than confidence. The small board he supports takes its aesthetic from the conference room, as expensive, high-polish wood, that on closer inspection reveals its artifice. The grain is as much a construct as the businessman’s limb, painted just-so to fool from a distance. It serves as a quick reference to the gloss and fakery that exists throughout business culture, and adds just that last bit to the performance to break it out of simple endurance art. 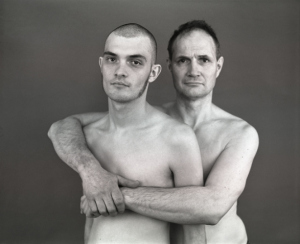 Fully recognizing these absurd rules of masculinity and then letting them go, if only for a moment, is the focus of Dorota Kozierdazka’s photgraphic series Rodzinne / Family Photography. It’s much less humorous than Mioduszewski’s work, but less cynical as well. Kozierdazka photographed her father and brother, both bare-chested and embracing each other, and as in Mioduszewski’s performance, the nuance of facial expression is everything here. There’s a bit of anxiety, but that’s nearly covered up by a very masculine sense of pride—not so different from that inspired by completing a dare. These men seem aware of the social norms governing displays of familial affection from man to man, but are willing to forgo these arbitrary rules and their own programed anxieties. 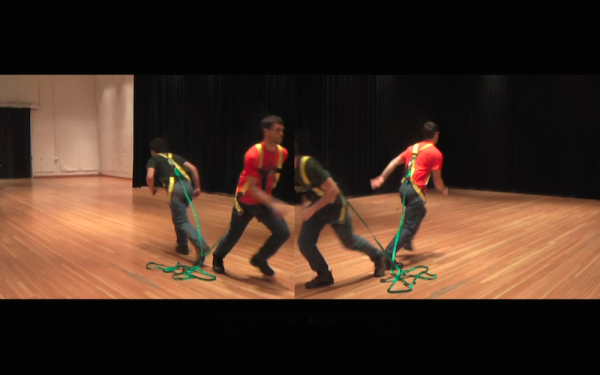 When untangling contemporary masculinity one quickly turns to its genesis, and in this the family unit is a likely target serving as a microcosm for society, which is apparent in a two-channel video by Alan and Michael Fleming. Here the absurdity of masculinity takes center stage: The twin brothers stand back to back, tethered together by climbing harness and several yards of rope. The two run away from each other at full speed. The line pulls tight and both actors are pulled off their feet by the other’s inertia. The two pick themselves off the floor and walk back towards the center point to repeat the process over and over again. The viewer sees the hopeless, ridiculous game that the players seemed locked into, but on a positive note, there is a certain camaraderie in the fruitless competition. It’s about as close to an accurate description of brotherhood as I’ve ever seen, and telling of the changes in masculinity in general. It’s Matthew Barney’s great athletic feats reduced to an openly acknowledged joke void of any heroism or supremacy.

These works by Sybren Renema, Jan Mioduszewski, Dorota Kozieradzka, and the Fleming brothers make for a strong conceptual core to the exhibition. Despite a few distracting works by other artists, I found Ex-Y to be one of the better group exhibitions I’ve seen from my own generation (artists’ birth years range from 1974-1988). It’s a welcome sight, and a strong start in Dallas for curator and gallery owner Hanh Ho. The theme and the exhibition, instead of acting as an excuse to put together a show of friends’ work, rather serves as a manifestation of an international zeitgeist among widely separated artists. Hanh Ho has set herself and her gallery an ambitious mission, but if this inaugural show is any indication it looks like she’s more than capable of delivering on those lofty goals.

All images reproduced with permission from the gallery.

This Just In: Another New Gallery Opening in...