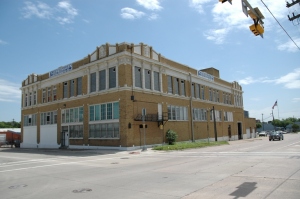 The building that will become Cedars Union

The Bowdon Family Foundation,  known for supporting visual art in the Dallas area, has purchased a 40,000 square-foot building built in 1921 in the emergent Cedars neighborhood, and have ambitious plans for it.  They’ll call it the Cedars Union, and its future purpose is multifold, according to Robert Hernandez, the foundation’s executive director, as quoted in the Dallas Observer. And here I summarize what the Cedars Union, at 1201 South Ervay, is proposing to be:

2) workshops for artists on how to professionalize their practice

4) employment hook-ups for artists (“Like if the Dallas Opera needed a carpenter and someone with those skills needed part time work, and there you go,” says Hernandez.)

That sounds admirable. The foundation has started building an advisory committee for the initiative, and the Observer reports that Jeremy Strick of the Nasher Sculpture Center and Kenny Goss of the Goss-Michael Foundation have signed on. In addition to the above description, there will be an underground bar, a street-level cafe of sorts, and gallery space. The Cedars Union won’t get going unil 2015 or 2016, but will be joining a neighborhood already on a lot of people’s art radar, due to spaces like RE Gallery, Homeland Security, and And Now.

i want to join up,I was involved in the beginnings of 500x Gallery and I believe in Art with a capital A, Artists need places like these. It has been my life’s work to see these things happen, and in fact I tried to get this building but am undercapitalized ! I can design build and renovate any structure and I want very much to participate in this project in any capacity .
Sincerely,
Mark T Bartos
214 440 7140

“RE Gallery, Homeland Security, and And Now.”

Well, yeah those and…. The Union, which has hosted performances, where Conversations In The Void is filmed, is a gallery, contains studios, is equipped to deal with sculpture, is readily capeable of hosting workshops, doesn’t need a bar inside to pay for itself, could probably get you a job or a loan before 2016, but more importantly has the same name and already exists.

I would think they’d at least want their own name.

Thank you for bringing notice Justin.

We have been operating as The Union Studios since January of 2013. Where the four of us Eli Walker, Joshua Ammon, Frank Darko and Kelly Kroener base our practices and have produced work for shows in galleries all over Dallas. In addition we have produced shows and have hosted Open Studios nearly every Sunday since May.

This operation is fully funded by our own monetary means and with the loving support of many in our community. Our goals and visions here are not laid out in a business plan, but have been fostered through a collective spirit and sharing of materials processes and ideas.

We seek to keep our unique name and identity in tact, while also working in tandem with the new enterprises that come into our neighborhood.

Additionally beer is generally free at The Union.

Thanks Justin Hunter Allen!
As one of the 4 founding members of “The Union: studios and production”
I find myself distraught by the disinterest in pointing out the obvious plagerism of our name. Understand, I don’t want to appear as some diva coming out of the woodwork whining about being overlooked. It does however stand out as odd that the two journalist entities covering this far from fully-developed project are also responsible for publishing a total of 4 articles about our space “the Union” or rather events taking place within it. The Dallas Observer I can overlook given it possess the journalistic acumen of a high school paper, but com’on bro…
“J’mad bra?”
“Ya bra,”
Now let’s not misunderstand, I’m thrilled that this is happening two blocks from my home (which is the north facing half of “The Union,” btw) and the Cedars is really gonna move up a tier because of it. Let’s just make a name adjustment. Have no fear, I’m pretty good at this, this’ll be free. Having brought you hook names such as SCAB & Pariah (not llc’ed, so feel free to rip that).
Let’s see *artist residency, *culture zone, *bar, *art stuff, *cedarsisamust
Beep beep beep
Bing, zip zip bing
Processing…processing…
“The Cedars Civil Collaborative” or “CCC”
Ya, that’s cache! Catchie, catch-ee. People will be walking around going “siiiii, triple C bro.”
Alright, I gotta get back the writing the press release for Bryan Rydens show, opening this Friday at…yep…”the Union” 6-10
Cheers, see yall there.
“

Triple C, not to be confused with the already-in-existence OC3 gallery, the Oak Cliff Cultural Center.