On the Prison Bus with Seth Alverson 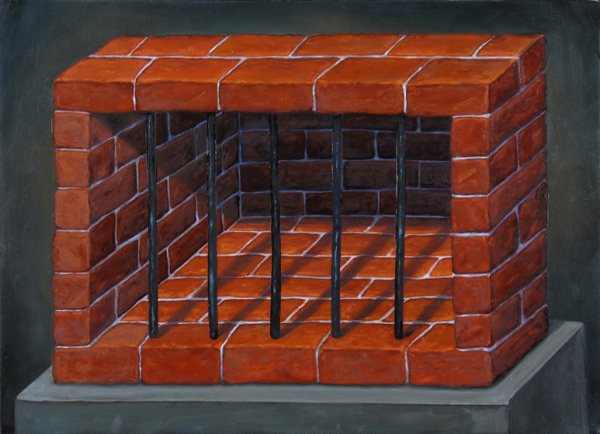 Seth Alverson‘s paintings in 09/05/14, his modest, tightly-knit show at Hello Project in Houston are traditional in the best sense: rather than just mimic historical styles, they do what oil painting was invented to do: represent the surfaces and appearances of real-looking objects with unholy vividness, and invest them with spooky significance.

Bars, prisons and barriers are the theme, most literally in Landscape Prison and Portrait Prison. Both paintings depict rectangular boxes built of meaty red bricks, closed off at the front by dark bars. The bricks look soft, like thawing blocks of ground sirloin. Landscape Prison is wide, Portrait Prison tall and narrow, just the size to put the two major types of traditional paintings on lockdown. The prisons are empty, but you don’t get the feeling that either the landscape or the portrait escaped — they died in there, slowly, like a neglected pet snakes. 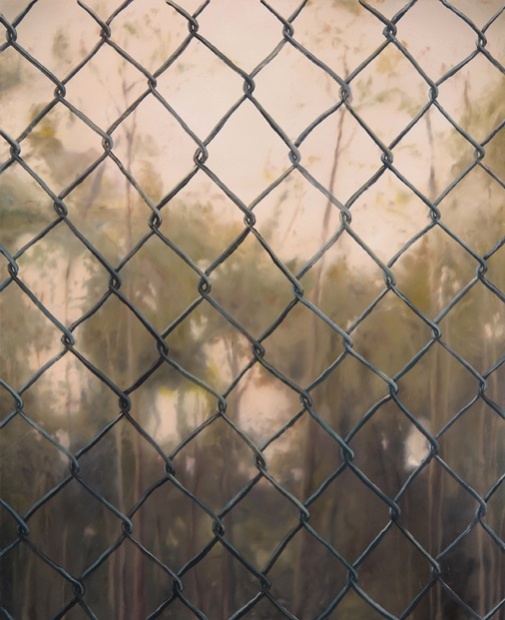 Landscape with Fence parodies an ancient photographic cliché: in the foreground, a sharp-focused net of chain link fence screens a misty, soft-focus background. Inside/outside; freedom out of reach — get it? The effect would get you a C- in Intermediate Photography class, but in Alverson’s painting the trite pathos of this contrast is made poignant by the irregularities in the hand-painted fencing: as in all Alverson’s work, you get the feeling he’s carefully constructed the prison himself, from the inside. 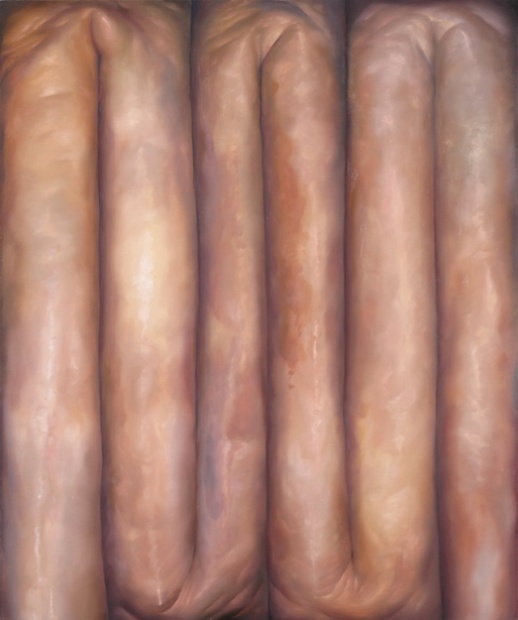 The three “intestine” paintings, Maze, Radiator, and Untitled, all from 2014, combine simple geometric plans with the illusion of repellent tactility. Grayish pink, the color of anatomy lessons, rotten beef and gingivitis, they have a greasy ambiguity that keeps them from being simplistic shock art: dimpled and sweaty, the back-and-forth pleats in Radiator don’t have to be read as internal organs: they could be folds in the vinyl upholstery of a fishing boat, as seen through the horror of a twelve-hour bout of seasickness. 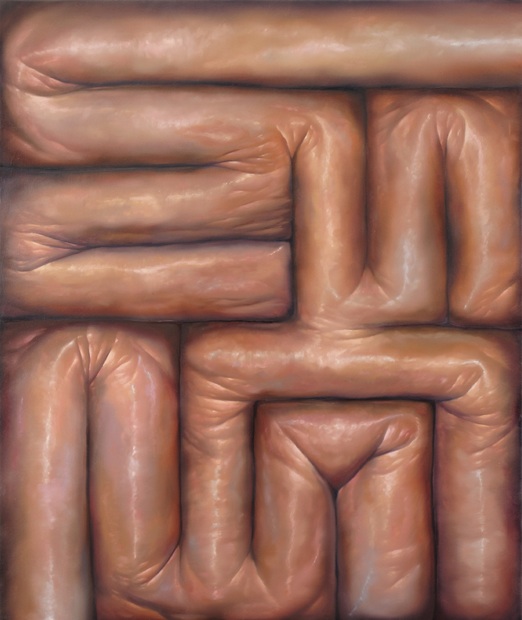 There’s an intense introversion on display here. As in Landscape with Fence, the literal bars, fences and mazes in pictures symbolize isolation with a robust obviousness that doesn’t hurt them a bit. Any teenager can draw a prison cell and say it’s about loneliness; Alverson’s finger-lickingly tactile bricks, bars and tubes and his leaden colors invest these simple symbols with whole operas of pathos.

Thank you Bill and Glasstire for this thoughtful review of Seth’s show!
And thank you Troy ^ for interviewing Seth and working with us on that amazing video!