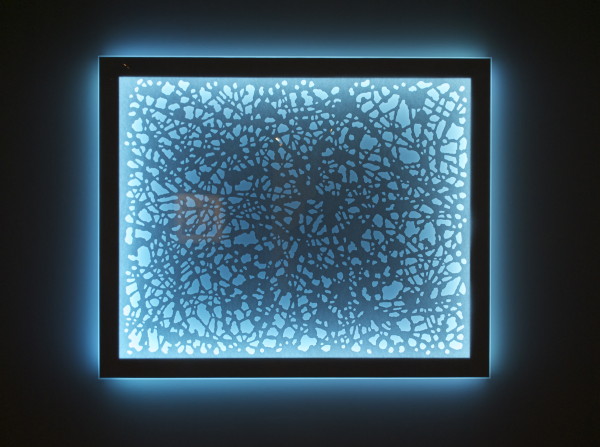 The most recent offering from The Goss-Michael Foundation is a solo show by the artist Adam Ball, organized by The Future Tense, a curator-led arts initiative from London. In many ways this show stays the course of what Ball has been exploring for the past few years: quasi-scientific abstractions of the real world that sometimes resolve themselves and other times remain entirely ambiguous. What separates this show from his earlier work is an investigation of size and materials. 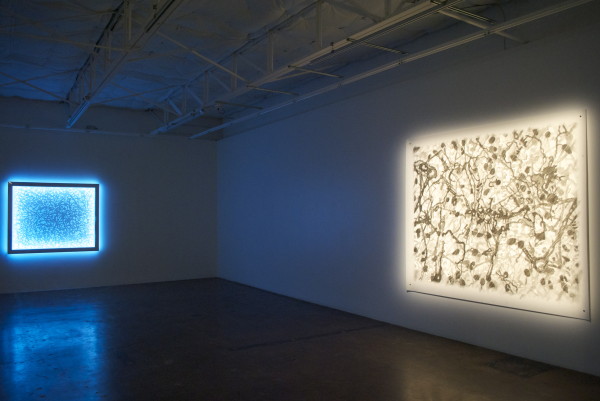 The show is divided into two sections. The front room is darkened with works either spot lit or, in the case of Imperfect Symmetry, emitting its own light. It is a dramatic way to open a show and the curators at The Future Tense deserve credit for knowing how to make an entrance. The works have Ball’s characteristic visual language, but are more experimental than his previous offerings. The first room is a hodgepodge of techniques and materials, but it works: the more cautious traditional media are balanced by mesmerizing forays into hypnotic experiments with transparent fabric, felt, and LEDs. The pieces range in size from a comfortably small print to a massive drawing that stretches from floor to ceiling, playing into what curator Ed Bartlett of The Future Tense calls “a new sense of scale and urgency,” in his press release for the show.

Alternatively, the main gallery, which is fully lit and far less dramatic, returns to more of the status quo for Ball. Though the sizes of these pieces vary, most are created using charcoal applied in Ball’s characteristic hand. 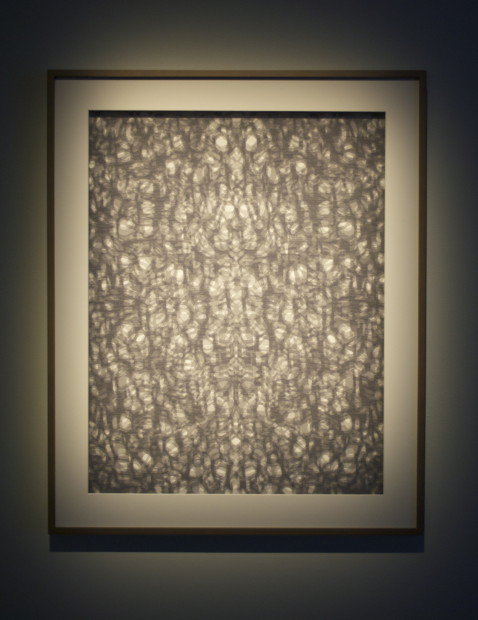 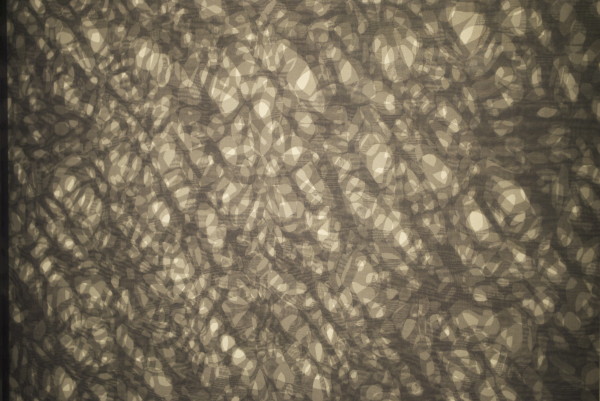 Omnipresent in Ball’s work for the past few years has been an interest in creating recognizably pseudo-scientific imagery. And whether viewers remember strange amorphous shapes from high school biology classes or from artist renderings of microscopic worlds, Ball has definitely adopted a mode of abstraction that most viewers will connect to science and his scientific interests.  As such, it makes sense that the main gallery is stark, white-walled, and clinical. The recasting of the white cube as science-lab sanctuary is not only apparent here, but well-trod by artists like Damien Hirst, and even by Ball himself. 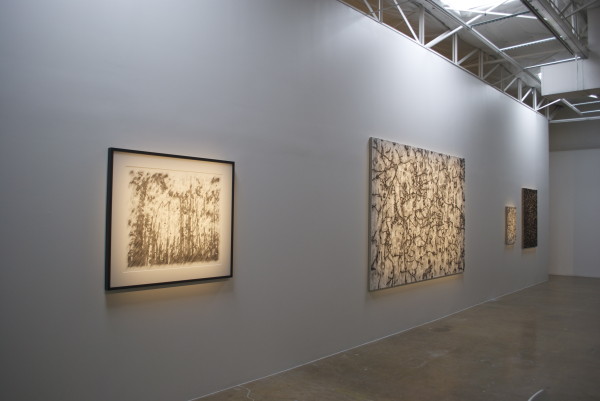 It is this first space, the darkened gallery, which occupies more interest for me. This room has more of the glitz of spectacle, as 21st-century tenebrism invites viewers to gawk at the illuminated work. However, what’s more interesting is that this room breaks from the staid one-to-one associations offered by the work in the main gallery and speaks to a theoretical  narrowing of focus for Ball, even as his process and materials diversify. For me, these works are concerned with formal relationships, material investigations, and ultimately, a reiteration of the visual similarities between these disparate microscopic scenes.

I don’t think that the work inspires lively debates about “the dichotomy between science and religion” or “man’s effects on the world around us” as the press release claims, but frankly I’m glad that is not what is happening. Ball’s work is instead an unabashed foray into imagery associated with potentially hot-button issues like genetics that avoids entangling itself in moral conundrums. The final product is a targeted meditation that is finding its direction and branching into new territory. 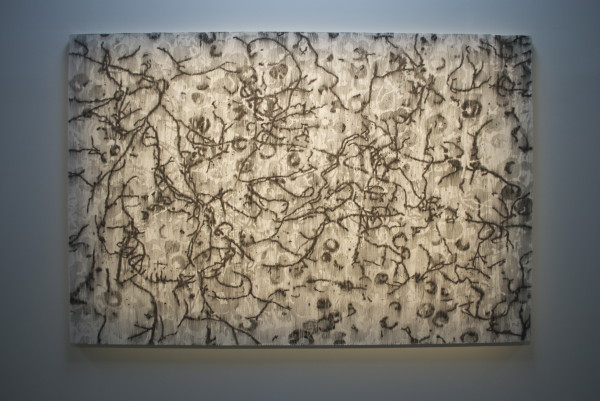