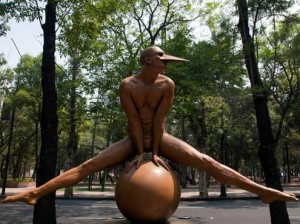 It must be a slow news week when a man calls KPRC Houston to complain about naked sculptures at Discovery Green and they actually send a camera crew to interview him and then run the story repeatedly. “Oh, it’s not art,” says Henry Lopez, who started the ruckus. “It belongs in a strip club somewhere.” Lopez says he will no longer bring his granddaughters to the park because of the “porn.” While the news crew was there, they found a few other visitors who also said the sculptures made them uncomfortable, including Blanca Flores who said, “I would not like my kids to look at it.”

The sculptures in question are part of Wings of the City, an exhibition of nine bronze sculptures by Mexican artist Jorge Marín, presented by Discovery Green from September 5, 2014 to February 8, 2015. The sculptures display a sometimes-winged man in different disguises and he isn’t always fully clothed. At the very end of the KPRC story, they add, “Many people at the park told Local 2 they enjoy the art, and said that’s all it is—art.”

Perhaps Lopez was inspired by the fact that it’s National “Banned Books Week” (September 21-27), and just got it backwards. It’s not in support of banning books; the subtitle is “Celebrating the Freedom to Read.”

Get Your Fancy Pants on with Us at...

Zoom in on those body parts, film crew. It’s news!! Oh, wait a minute, we bombed Syria…..oh, forget about that. BRONZE BALLS IN PUBLIC! STOP THE PRESSES! And to think the Greeks painted their statues anatomically correct before erosion made them pristine white. Of course, that was before Fox news…..

Too bad for his granddaughters, but exhibits like this are a lot more fun without uptight people like Mr. Lopez.

I can probably bet he got government grants or the city to pay for the sculptures.Why would the city embrace Mexico. Houston has some of the very best artist . This is Houston and it should being showing the local talent .