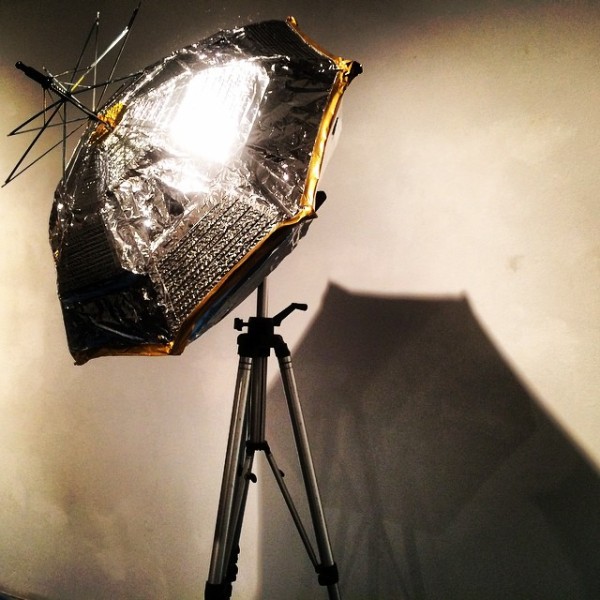 Christopher Blay has been knocking around Fort Worth for more than a dozen years as an artist, sometimes as himself and sometimes as a cheeky alter-ego named Frank Artsmarter, who we haven’t heard from lately. His newest solo show, currently on at UTD’s CentralTrak while he does a residency there, is called “Satellites,” and while its surface is jankety and jokey, its undercurrent isn’t, and you can see that the Artsmarter gag is evaporating from Blay’s playbook. I assume this shift is due to a common reason: As one moves through life and gets hit with tragedy and disappointment, young-adult snark and arrogance can dry up. This can be a good or bad thing, depending on how one fills the void. 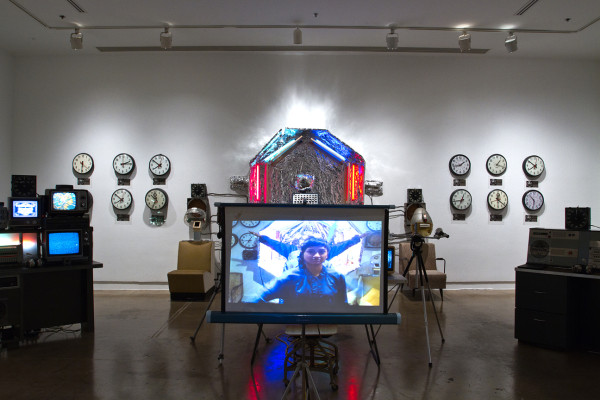 Installation view of Blay’s “Machine Time” at the MAC, Dallas, 2012

We’re getting a hint of where Blay is heading. His last solo show in Dallas was in 2012 at the MAC and called “Machine Time,” and its expansive but intentionally crude time-machine constructions dealt with similar issues as the current “Satellites”—a kind of romantic and melancholic failure to launch via impossible hand-built objects. Blay has also been building a social-practice kind of art, engaging members of otherwise-neglected communities in Dallas and Fort Worth in some recent and upcoming public projects around grief and loss. He’s getting more sincere and serious as he gets older.

Despite always working, Blay has never shown much interest in the commercial viability of his work, which sets him apart somewhat from the kind of blatant striving I’m seeing from a lot of young artists in these parts (who are currently making a flood of small, house-friendly abstract paintings). Blay’s work used to be messy, fast, or informal– it’s taking on a little more polish now– but in service to the exploration of human ideas that are also messy but real. And he hasn’t lost his sense of humor entirely of course, which is good because he’s one of the few actually funny artists around here, and the humor gives his work some uncommon depth and sharpness. 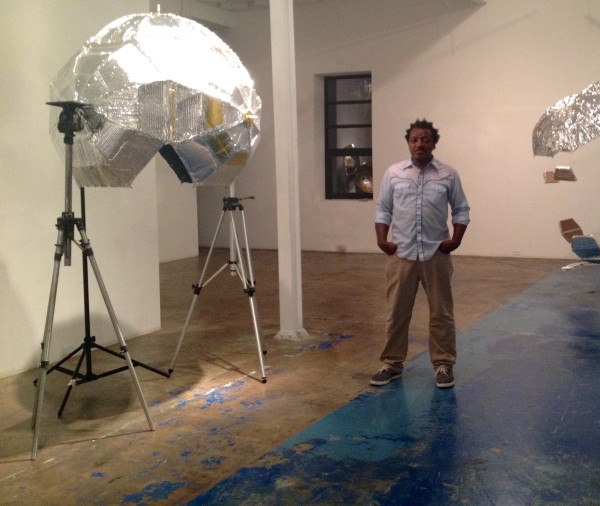 Artsmarter the character, most active around 2009-2010, was Blay’s skeptical id on the loose, poking fun at power structures in the art world (locally and otherwise), and how the powerful bestow value on art and artists. Artsmarter would hold thrift-store art “auctions” and advertise fake seminars on how to become an art star, and make satirical video shorts about selling really bad paintings directly to the Kimball. The Fort Worth art community was happy to play along with Blay’s comedy. (Disclosure: I appear briefly as a curator in one video.) They knew the jokes were laced with a bit of acid, but no single person or specific entity was hurt in the process. That might have been Artsmarter’s weakness in the end; he could have been seriously cutting, though it would have made the Artsmarter part of Blay’s art more difficult to make locally, and Blay doesn’t seem inherently bad-natured.

Blay’s “Satellites” might not be the death of Artsmarter, but it’s hard to imagine the character making a comeback. (Never say never.) The show is made up of what are clearly basic umbrellas (intact and deconstructed) and outdated photo tripods and chunks of brown cardboard all wrapped in silver and gold-patterned foil and crafted into ersatz sci-fi communication pods. The execution is clean but the abjectness of the materials evokes a modern-day Robinson Crusoe or the Professor on Gilligan’s Island trying to build low-tech devices out of anything on hand, for sending out an urgent SOS or picking up a weak signal from the outside. Funny, yes, but undeniably sad, too. 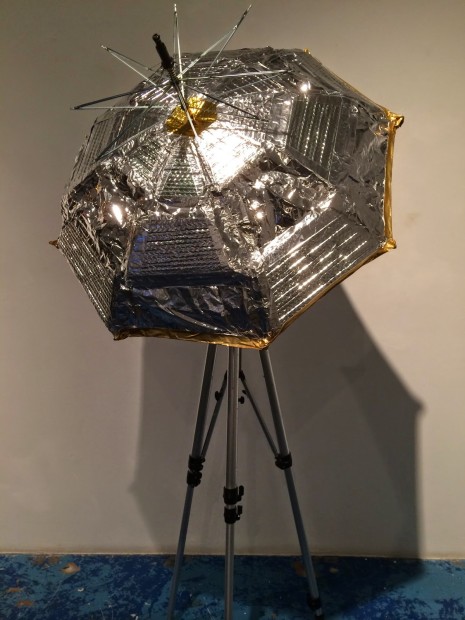 The machines are satisfying as sculpture in the humanness of their scale. They’re chunky and shiny and they bounce light into your eyes. You can squeeze in behind them or stand inside one; another is strung up like a mobile you can crawl underneath. They have a playful appeal that doesn’t mask the underlying heartbreak; this is the balance that makes it all work. This isn’t a crazily ambitious show. It’s modest in fact, but admirably succinct. The restraint feels dignified rather than abrupt, and lucky too; after all, too much silver foil could only remind us of Warhol’s Factory. 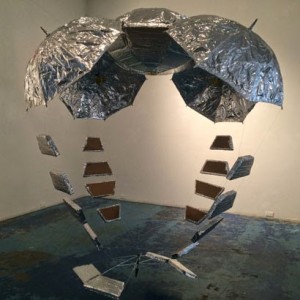 It has been made public that: 1) Blay’s sister died while he was making this show, and 2) as he initially conceived the work, before her death was imminent, he was focussed on a passage by Czech philosopher Vilém Flusser about humanity’s consistent desire to communicate and our failure to do so, and why. In part: “Human communication spins a veil around us in the form of the codified world. This veil is made from science and art, philosophy and religion, and it is spun increasingly denser, so that we forget our solitude and death, including the deaths of others whom we love. In short, man communicates with others. He is a ‘political animal,’ not because he is a social animal, but because he is a solitary animal who cannot live in solitude.” 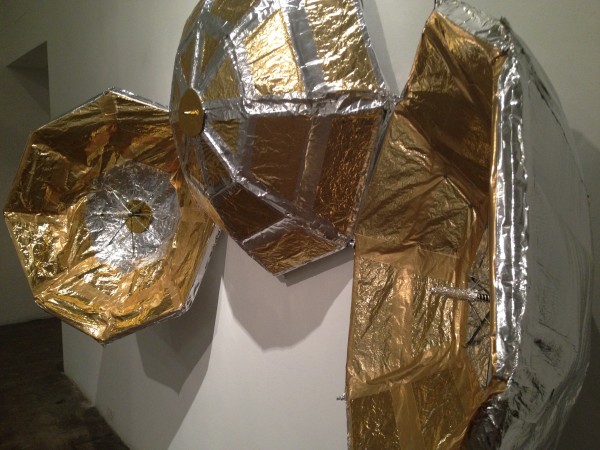 While channels of communication multiply in this era—I don’t need to illustrate the millions of ways this tech expansion threatens to consume us—the deluge of signals has often proved divisive, depressing, and in competition with actual human contact. Blay shows us here that his call to his audience, to his family and his sister, to the sentimental and lost past and uncertain (but hopeful) future is far from guaranteed. His machines look sweet and friendly but they’re not meant to work. Their very dubiousness tips us off to Blay’s evolution as an artist.

Thank you for this. I already liked the work, though I was waffling a little on how the objects lay kind of awkwardly in-between being satellite dishes and the found objects that refer to satellite dishes, but I feel really endeared to them now.