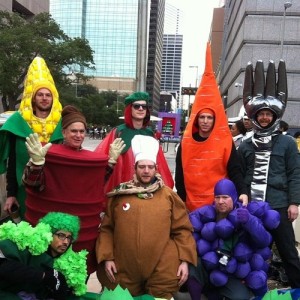 Last year’s parade was a hit, if only for the weird float designed by Patrick Renner, Alex Larsen, and Dennis Nance. “H-Town Bounty” featured a giant cornucopia that functioned as a half-pipe in which skateboarders dressed as giant vegetables showed off their moves. Potential inventive float artists should consider the gauntlet thrown.

The City of Houston is now seeking proposals from artists or organizations to create parade floats to be part of the 2014 H-E-B Thanksgiving Day Parade. Artists will receive a materials budget of up to $11,000 and a $2,000 artist fee. The deadline for submissions is September 26.

I was a part of the initial proposal process, but unfortunately had to back out before things got started. Dennis Nance picked up the mantle and designed all those awesome costumes you see. You might more accurately list his name here than mine.

Thanks for the clarification, Eric. I did switch out the names, because Dennis should get credit for those fabulous costumes. They rock!

The Houston ArtCar Klub float didnt even get a mention?
“Houston, Artcar Capital of the World”?
It was awesome and the Mayor loved it so much she asked to ride atop of it for this years Artcar parade back in May.