Pink flamingos wouldn’t have seemed out of place at Summer Party, the inaugural show at the new Hello Project in Houston. It’s a sunny, color-coordinated, summer show of works by younger artists, but beneath the lighthearted gloss, what you see here is not playful kids indulging their sweet-toothed fancies, but schooled, disciplined young artists jockeying for niches in the world of gallerys and art fairs, each trying, through superior work, superior spin, or superior networking to displace their rivals, who are legion. It’s too late to decry complicity—years of professional practices classes have turned out cohorts of artists for whom such careerist aspirations are an unquestioned norm. 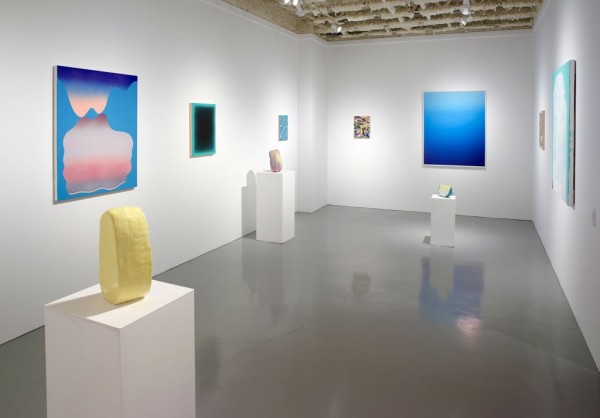 The tight, self-conscious summer theme was set by Jonathan Hopson, curator of the brand new space within McMurtrey Gallery. Hello Project (not to be confused with Hello Studio in San Antonio, or the Hello Project online post-it note gallery, or the Japanese girl band of the same name, all of which share something of the same poppy hyper-optimism) is an artist-run space in the new mode: rather than a shabby warehouse or a defunct storefront, Hopson has carved an art-fair booth sized white cube from a disused storeroom in an established commercial gallery.

Three of the show’s five artists use the color-gradient gimmick, familiar from silkscreened showcards. Alika Herreshoff’s Sour Oranges and Carlos Rosales-Silva’s East LA Sunset Eclipse could be by the same painter. Angel Oloshove’s pieces could be the composite artist’s ceramist avatar. 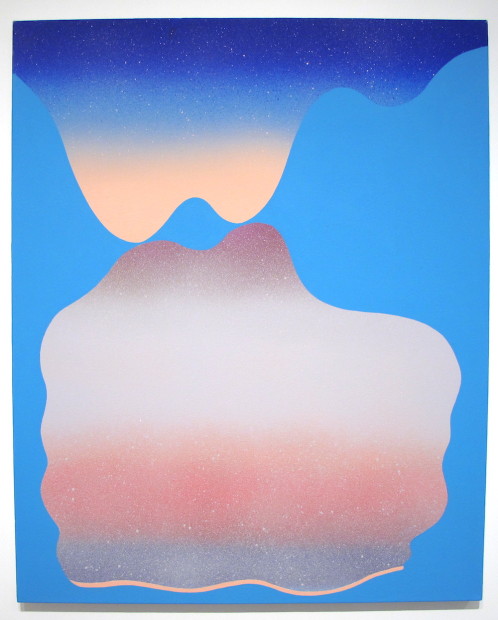 Alika Herreshoff‘s colorful, fluid abstractions are central to the show. They’re like half-recognized comics with the silly, yet sublime atmosphere of new-age inspirational posters. He’s adept at disorienting: Cosmic Lick operates like the old face/vase illusion: two fluid shapes could be blobby faces, all chin and tongue, bulging out towards one another, or they could be cutouts revealing infinite, star-flecked space. The piece has a dreamy optimism, as if the face/blobs were thought balloons containing stardust and moonbeams. The mild longing Herreshoff sets up between one form another keep things just interesting enough. 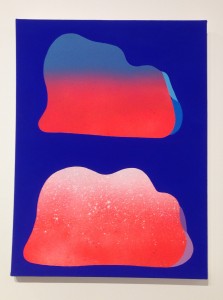 Sour Oranges compares two jujubes on a microscope slide. One has sprinkles, one is half grape. Which to eat first? Yet, somehow, Herreshoff makes us care. We assess these ridiculous objects, and laugh at ourselves assessing them. All of Herreshoff’s work is like that; bold graphics mask subtle nuances of color, shape and placement that make his shapes and their interactions suggestive and compelling.

Angel Oloshove‘s Prince of Objects and Meditation Cave look as if they were red-carded out of one of Herreshoff’s paintings, and put on pedestals as punishment. They’re hoping to get back in where the fun is. Oloshove’s forthrightly functional ceramics (not in this show) are better, free from the pretension and manufactured aloofness required of “sculpture.” Summer Babe (Winter Version) is at least cute: painted seeds turn the wedge-shaped it into a frankly silly watermelon. 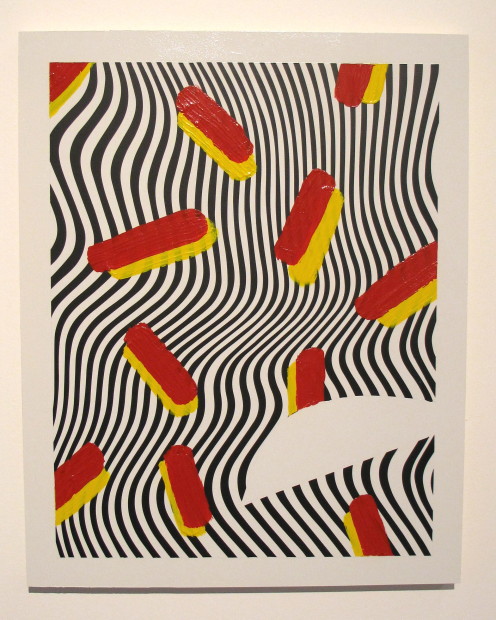 Conceived on a cell phone screen and sprayed or stencilled onto immaculate, identically sized panels, Carlos Rosales-Silva‘s meta-paintings have an intentionally cold, assembly-line feel. Aggressively crass, these unlovely artifacts take the idea of conceptual painting seriously, but even the concepts are thin: In Hot Cheetos and Takis, Rosales-Silva decorates a wavy, Bridget Riley style op-art field with clumsy hand-painted red blips in a simple desecration/homage. The piece feels like a swatch, as does his Weed, a pea-green rectangle with leafy cutouts, wisps of blue spray-painted smoke, and a spliffy stick of brown paint. Ganja— get it? 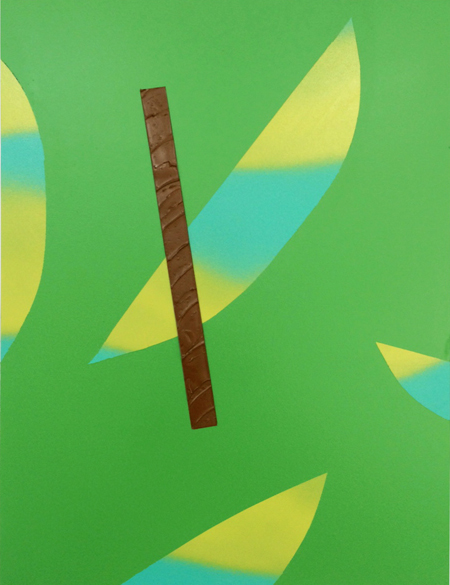 I’ve heard that the pieces have latino pop references, but only the most stereotypical ones, and it’s only via the titles: East LA Sunset Eclipse could as easily be Hoboken Sunrise Eclipse. The title of Ground FX suggests lowriders, but the fading black rectangle could as easily be Vibrating Door or Skyspace at Night. I can appreciate, even admire Rosales-Silva’s uncompromisingly affectless works as Warholian cultural placeholders — intentionally vacant products with junk-food ideas, throwaway technique and gallery-art price tags, sold under the New Latino Art brand, but I can’t like them much. In the hothouse marketplace of New York (where Rosales-Silva moved after finishing his degree in Austin) they may be pointed commentary, but here in Texas they lose some of their punch.

James Scheuren‘s big photographs present mildly curious situations involving bright colored objects. #14 (Chair Hits Wall), a 3×4-foot photo of an old blue wall, could have come from a stock photo agency. The scrapes and scuffs on the wall’s surface tickle a faint curiosity about the events that created them, but mostly, it’s about sumptuous blueness. In Raft, a pink pool float lies incongrouously on a dusty trail. Forgotten? Remnant of an assignation? It’s curious enough for a momentary double-take, but not much more. 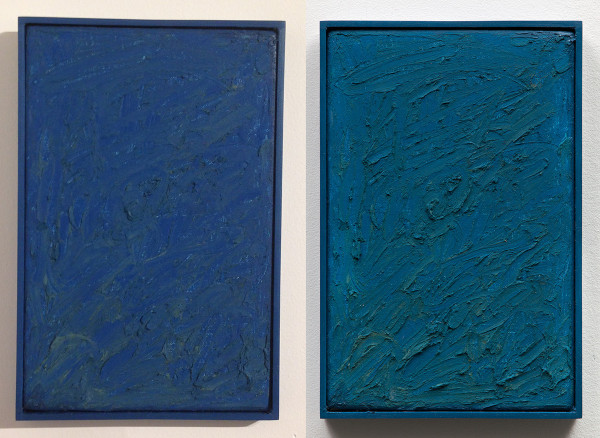 Michelle Rawlings‘ introspective, history-laden works differ from the rest of the show. Her sincere re-investigations of historical art styles in miniature prove there can be something new in something old. At only 7 x 10 inches each, Sea Blue and Ocean Blue are dollhouse versions of monumental abstractions. Deftly hung across a corner from one another, their ever-so-slightly different hues and the minutely divergent paint handling in the two otherwise identical monochrome paintings become important in a way they never could alone, and which is traditionally accomplished through enormous size. I saw images of these paintings on the web and mistakenly assumed that they were a couple of feet tall and exceedingly boring. Not so! Rawlings has taken a tradition that has been beaten to death and with a ju-jitsu flip found a new feminized, fetishized way of looking at it. 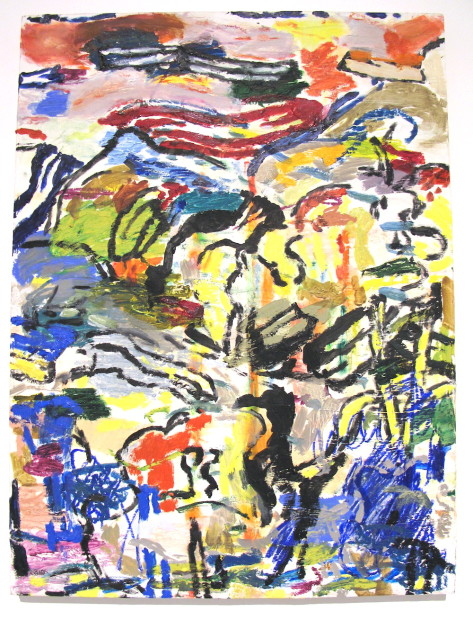 Rawlings’ third piece shows her versatility. It’s a sketchbook-sized painting filled with purposeful mini-gestures, like unfinished fragments of figuration, text, or landscape. A network of black lines gives the piece structure. The untitled piece has the light touch of a doodle, without doodlish meandering. What it is, once you recognize it, is good, solid, fresh, gestural improvisation, on a miniature scale.

Is this the next generation of great artists? The same apple-polishing that gives the work an unattractive precociousness gives it credibility. There was a lot of good energy at the show’s mid-week opening, where intelligent, ambitious young people congregated to share ideas and get excited about themselves. These artists may have a slightly distasteful anxiety to fit themselves into the art industry, but they have made an excellent start.

Summer Party will be on view at the new Hello Project Gallery, inside McMurtrey Gallery at 3508 Lake Street in Houston through August 16, 2014.

McMurtrey Gallery to Close its Doors