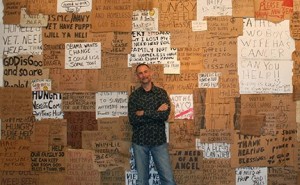 On July 1, artist and SMU advertising professor Willie Baronet began a month-long journey, from Seattle to New York, purchasing signs from homeless people. Baronet has been collecting these signs for 21 years and, while he admits some ethical stickiness to the project, he meets and chats with the signmakers and lets them set their own prices (usually $5 to $25).

In 2009, Baronet had his first solo art exhibition at Deep Ellum’s Hal Samples Gallery. A few years later, he gave a TED talk at SMU, and was profiled in last September’s issue of D Magazine. He is writing a book and is now chronicling this month’s trip on his blog “We Are All Homeless.”

On the very first day of Baronet’s summer journey, Hyperallergic also reported on the Barcelona-based Arrels Foundation that now turns homeless people’s handwriting into typefaces. In an article entitled “Homeless Fonts Are a Feel-Good Fail,” the web journal calls Arrels out for their suspiciously warm and fuzzy video campaign and their vague explanation of where the profits go. For the Arrels Foundation, there is no acknowledgment of the sticky ethics—corporations and advertising firms that buy typefaces from homelessfonts.org are given “a quality seal identifying the project and so demonstrating their social commitment.”

I believe Willie has good intentions of illuminating a national problem and bringing awareness to the needs we ignore daily.

The typography of hand-lettered signage is interesting: it’s everyman’s way of influencing typographic culture. That said, it’s a long way from ad-hoc sign to codified typeface; the issue of royalties for the signmakers, who are only exemplars of folk traditions of lettering that are culture-wide, isn’t that problematic, although using them as a feel-good sales tool for the resulting fonts is icky.

“The 2014 Financial Report is printed with the Gemma Homelessfont”