A bit of Lee Marvin with your morning coffee? 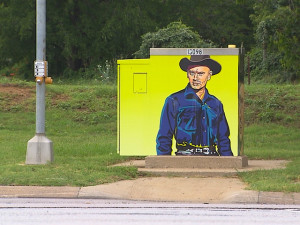 CBS-DFW ran a story yesterday that brought to light something I hadn’t seen before: North Richland Hills (a small city between Dallas and Fort Worth) has since 2007 taken a cue from a public art project in Santa Fe and wraps its big gray traffic signal boxes in large prints of original art by regional artists. The latest themed edition of the Signal Art Program is called “Hollywood Film Cowboys.” It features images of the likes of Yul Brynner (from “Westworld”of course), Clint Eastwood, and John Wayne. Some of the boxes’ sizes are pretty imposing, so the effect is more striking than one might predict. Graphically, they have a bit of a Warholian quality, which is an interesting and somehow fitting touch for a suburban commuter town. Here is a good clear map of the intersection locations of each.

As of Tuesday, ten boxes have gotten the cowboy treatment and, since the program’s start, a total of 15 boxes have been wrapped in imagery by artists such as Sarah Green and Nancy Lamb. Each piece costs between $500 and $1500 to produce and install and the project is made possible through donations to NRH’s art program. Right now the city is seeking more regional artists to contribute to the initiative.

Fort Worth Gets its Art On; Spring Gallery...