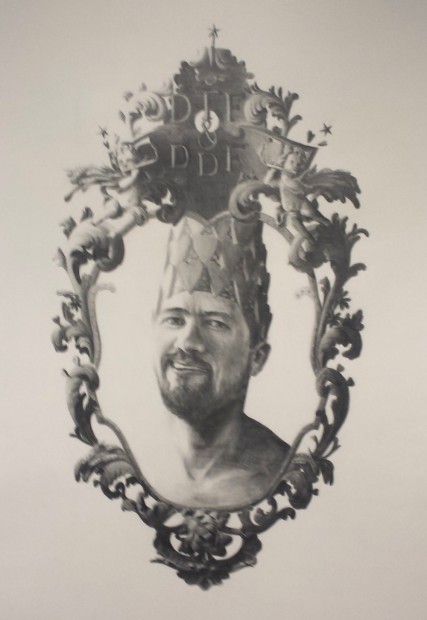 A graphite self-portrait of Mark Harold Ponder as a sort of jester-king grins expansively over Church of Man Love at Box 13. In the drawing’s ornate trompe l’oeil frame Ponder has inscribed the letters “DTF and DDF,” effectively labeling himself as both “down to fuck” and “drug and disease free.”  It’s cheeky, with more than a little braggadocio. That this attitude is expressed so pointedly in the curator’s own work has to do with Ponder’s self-described premise for the show he’s organized. Ponder has assembled nine male, gay artists for a show about exploring taboos—not necessarily large cultural ones, but personal taboos ingrained through a lifetime of self-judgment. 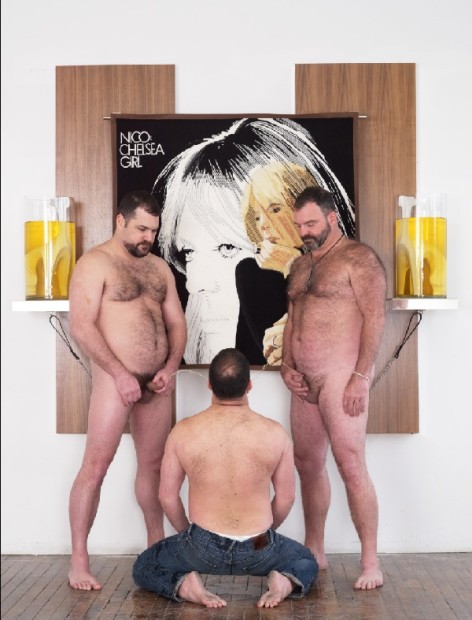 Other works runs the gamut in terms of medium and concept. Some pieces speak to this concept heavy-handedly, echoing a confessional line of self-exploration. Nico by Chris Bogia is a photograph of three men engaging in a fetish game involving urination. Funnily, they all resemble one another: their paunchy, hirsute figures are so similar that at first I thought they were three photoshopped images of the same man. The stylized, symmetrical photograph combined with the double doppelgangers adds a surrealist’s humor to the image. 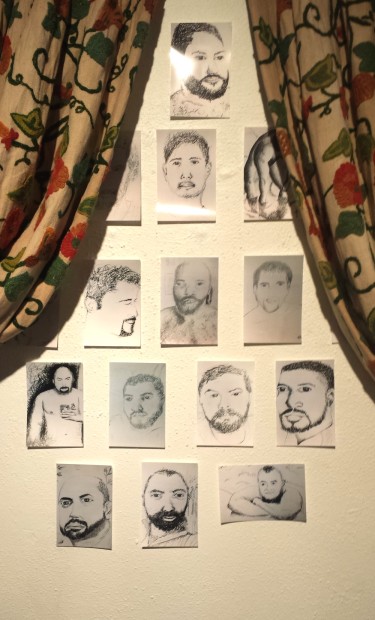 Conversely, a piece like Erik Hanson’s The Hook-Up Drawings is a bit too coy.  Quick portrait sketches of various men peek from behind a curtain tacked to the wall. These are portraits of men Hanson met on Craigslist. But he seems to neither glorify nor decry his sexual exploits. The retro kitchen-curtain, in its autumnal colors, is far more specific than any one of the drawings. 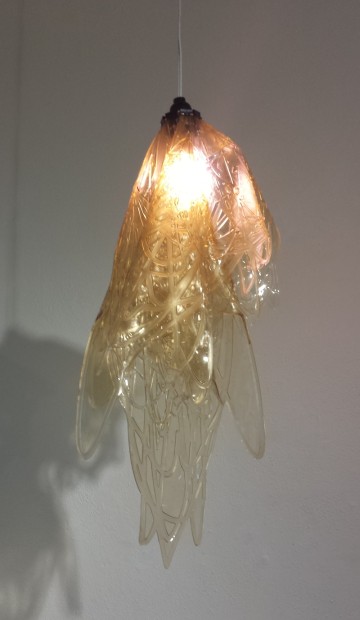 Ponder’s curation seems to vacillate between his quirkier sensibility and just plain old love of gorgeous objects. Igor Siddiqui’s 40 Blossoms is a piece of Plexiglas with a hole in the center, etched with expressive patterns. The positive of this etched shape is draped over a light bulb, wilted and slick looking. The overtly sexual aspect of this piece (it’s a riff on a glory hole) is sublimated by its beauty. 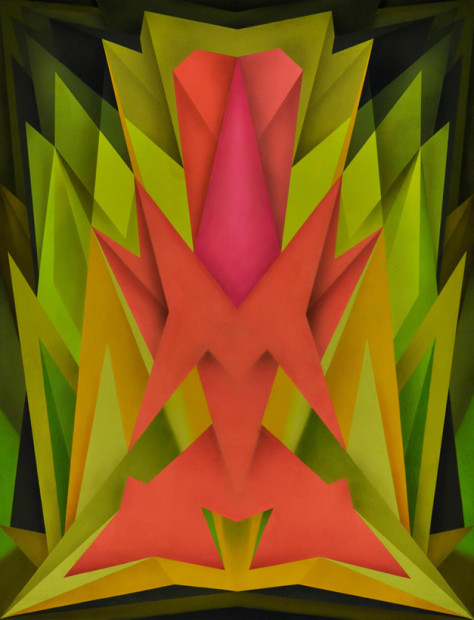 Objects like Siddiqui’s and Brian Guidry‘s carefully painted floral canvas, (which looks like a hard-edged, art deco Georgia O’Keefe) lose out a bit to the slightly scruffy environs of Box 13. These are artists who clearly appeal to a white-walled, airy aesthetic. And this is the crux of the problem: the pieces that speak most clearly to Ponder’s premise are relegated to the dimly lit space in the back of the gallery. Unlike their famous forbearers, Robert Mapplethorpe and Tom of Finland, some artists in this show haven’t fully learned the eradicating, transformative power of beauty. And those who have aren’t overtly addressing the issue of subverting shame. Ponder’s DTF&DDF unifies these disparate ways of working, but with its icons of transfigured taboo, The Church of Man Love doesn’t evangelize powerfully enough.

Mark Ponder lives and works in Houston. His work was included in the 2013 Texas Biennial and the 2013 Texas Contemporary Art Fair. He has recently exhibited at Gaddis Gesslin Gallery in Huntsvillle, the EMERGEncy Room in Houston and Ro2 Gallery in Dallas.

Ponder is the recipient of a 2014 Louis Comfort Tiffany Foundation Grant.

The Tom of Finland Movie