Kitsch alert: Tango frogs are back! 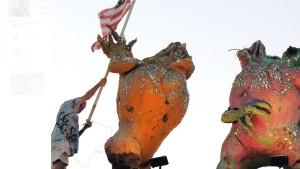 Three of the beloved “Six Frogs Over Tango” will return next week to their original Lower Greenville Avenue perch in Dallas after their long exile to the Carl’s Corner truck stop outside of Hillsboro, Texas.

Austin-based artist and Dallas legend (he of the Oak Cliff Four) Bob “Daddy-O” Wade, now 71, created the installation of six ten-foot high frogs in 1983, to mechanically dance along the roofline of the nightclub Tango. At the time, locals embraced the wire-and-foam sculptures as neighborhood mascots, though city officials had to be swayed to let them serve as official signage.

The old Tango spot at 1827 Greenville Avenue is now a Taco Cabana. Todd Coerver and Tim Taft, executives for Cabana and its parent company, worked to get the frogs back as part of an overall effort to rejuvenate the Lower Greenville strip. Taco Cabana purchased the frogs and has had them restored.

Back in the early ’80s, Tango owner Shannon Wynne commissioned Wade to fabricate the frogs, and since Wynne’s father Angus was the man behind Six Flags Over Texas, the sculptures became known as the Six Frogs Over Tango. Tango closed about a year later; the frogs moved to Carl’s Corner, and after a fire there they were partially split up. (Three of the six frogs are still hostages at a Nashville-based Chuy’s. Boo.)

On June 26 starting at 4 p.m., Taco Cabana will host an ’80s-themed outdoor party called Throwback Thursday to celebrate the frogs’ return, with Daddy-O in attendance.

June 26 is the frog day of summer!