Trading Post disappears into the mean streets of big D 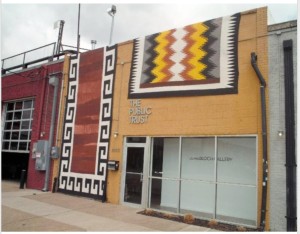 Liliana Bloch, owner of her eponymous gallery (carved out of the front section of the Public Trust) in Dallas’ Deep Ellum neighborhood, last week reported that part of artist Ann Glazer’s outdoor installation had been nicked. One of Glazer’s two large painted tarp-as-carpets (pictured), titled Trading Post, was stolen by God knows who about two weeks ago. Up since the April weekend of the Dallas Art Fair, the tarps were meant to stay put over months of slow organic decay (a sort of urban earthwork, if you will).

Bloch, after surmising the piece had not simply blown away, filed a police report. (It wasn’t just draped there; it had been professionally installed.) Though I would suggest that the tarp was the victim of the Deep Ellum elements, just as it was meant to be: drunk and sober vandals are as much a part of the flora and fauna of Commerce Street as the wind, rain, heat, graffiti artists, etc.

It’s tough in the streets, even for painted carpets.