No Walls: the Expanded Curatorial Practice of Michele Monseau

For 13 years, Michele Monseau ran Three Walls Gallery in San Antonio’s Blue Star Complex, in the same ramshackle corridor of artist-run spaces as Cactus Bra, run by Leigh Ann Lester and Jayne Lawrence, and Stella Haus, run by Dayna de Hoyos. In 2012, these three independent, women-run galleries fell casualty to James Lifschutz’ redevelopment of Blue Star (which also marked the end of Jump-Start Theatre company and Joan Grona Gallery, an emerging-artist landmark). But the rejiggering at Blue Star has ushered in at least three hopeful changes: the new iteration of Fl!ght Gallery, the ascension of Mary Heathcott, formerly of Artpace, as director of the Blue Star Contemporary Art Museum, and the transfer of Michele Monseau’s talent and energy from running a physical gallery to an expanded and exciting pop-up curatorial practice. 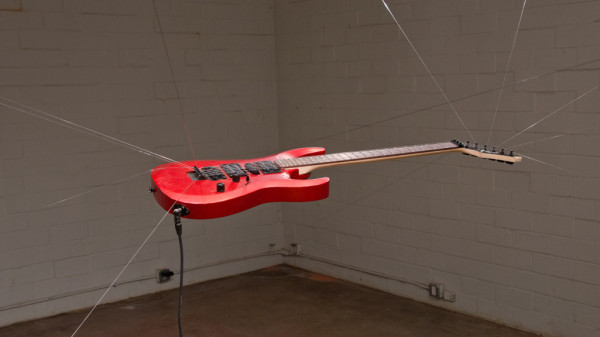 Perea’s bona fides as curator are new-media and international, having served (among other things) on the curatorial team of electronic art and video festival Transitio_MX in 2011. Perea was also the inaugural resident of the Casa Chuck Arts Residency Program in September 2012, when she and Monseau initially fomented their exhibition.

For La Tensión Extendida, an electric guitar was suspended from walls and ceiling by its taut strings, creating a working instrument — viewers could pluck the strings, causing the guitar to vibrate and silvery clangs to ring out against the concrete floor. The guitar was a spiky visual presence that recalled big-shouldered American rock ‘n’ roll, but with a spidery unease that, given the nationality of the artist and the exhibition’s title, became a metaphor for the current Mexican political situation. The narco-nexus, I’ll call it: the militarization of the border, the dangers of the drug war in Mexico, and the vastly distorted shadow it casts on American attitudes via American media. La Tensión Extendida is a spine-tingling piece of work with a lot of context.

During the final installation process I sat in the backyard with the curator and the artist, who seemed optimistic, pleased, and exhausted. They were very genial, and spent about an hour talking to me about this series of sound-engaged sculptures. La Tensión Extendida is the continuation of a series of works by Iturbide involving musical instruments suspended in a state of literal and conceptual tension, commissioned in 2012 by Perea for the 50th anniversary of the Centro Cultural del Bosque, a complex of seven theaters right across from Military Base One in Mexico City.

“The previous sculpture to La Tensión Extendida was called Contención Reglimentaria,” Perea said, “and it was standard-issue military drums suspended in a space—”

“With the drumsticks suspended mid-strike,” Iturbide continued. “Because we live inside a contention, a war, and [while] in Mexico City there is no war, and [in the US] there is no war, but if you want to go to the beach by car, you can’t. So you are contended, you are living in contention.” Of his current opus, Iturbide said, “What’s different about a guy like me, from a visual artist who uses sound elements, is that I’m a composer.” Iturbide’s history as a sound artist is informed by graduate study with Ratko Tichavsky, Horacio Vaggione, and awards from the Bourges Electronic Music Contest and publication in the New Journal of Music Research. His website, where you can hear his compositions, is a terrific resource for his art and sound art and electroacoustic music in Mexico and Latin America in general.

In La Tensión Extendida, Perea and Iturbide brought together a theory-informed new media literacy, the lived tension of Mexico in contemporary wartime, and an eagerness to engage a San Antonio audience, and it felt like a profound gift. On opening night, gallery visitors plucked the strings, hovered, circled, murmured — curious, admiring, unnerved.

That Monseau brought La Tensión Extendida to San Antonio is a function of her commitment to aesthetic cross-pollination. I had lunch with her on May 3, just before she set off to facilitate and install Crossing The Line, the second half of this two-part cross-border art exchange. Over tacos and clamor at Tito’s, she talked about how she came to San Antonio from Ohio in the mid-90s. For her, “San Antonio was a different world, initially, but 17 years later, this cross-pollination is part of who I am.” She described learning foodways, history, some Spanish, and how she saw her own ideas regarding colonialism being “illustrated in an in-your-face way by the social issues in my city, where I’ve become more socially involved than I thought.”

According to Monseau, the relationship between Texas and Mexico, and its physical non-boundaries, political implications, social constructs, and history “have interacted with the rest of my thought process in terms of work I make and what I curate, in this kind of evolution over the past twenty years,” and she adds that “in terms of history and culture, arts-wise it makes so much sense for San Antonio and Mexico City to be sister cities.” She sees herself as an artist running a space who fell into a curatorial role, and she laughs, “which is weird, because that’s kind of a mission statement.”

I hope Monseau’s curatorial work sheds new light on her own art, which, like Iturbide’s, is rife with synthesis. Four years later, I’m still deeply interested in the first work I saw of hers, her two-channel installation Isabel (2010). In it, her camera pans up the sides of soot-blackened bank building on Calle Isabel La Catolica in Mexico City, and rests on bodies on the pavement below, touching on the human physicality within institutional structures of banking, colonialism, and Catholicism. It’s lavish and lively, melancholy and a tiny bit funny.

Her Cinematic Landscape series of digital photographs, in which she doubles the images of lakes, deserts, and fields into subconscious-tickling meta-vistas, is no less potently disquieting for being beautiful. Her sly, uncanny manipulations put them into a metaphysical territory that resonates with the large-scale, sci-fi-tinged imaginings of Kelly Richardson and the heartfelt 2D musings of Jennifer Stead. (One of my curatorial daydreams is to to set these three sensibilities loose on Enchanted Rock.) Monseau’s most recent video work, ghosttrain, which appeared in Quiet Zone (Train in Vain) at Sala Diaz, put twinned locomotives in haunted prairies of West Texas. ghosttrain combines an exhilarating visual momentum and a meditative rhythm, a fruitful paradox that so often characterizes a Monseau artwork, a Monseau-curated show, and Monseau herself.

Manuel Rocha Iturbide’s La Tension Extendida, curated by Barbra Perea, was presented by Three Walls in a pop-up space at The Warehouse located at 1119 S. St. Mary’s in San Antonio on March 14, 2014.

San Anto has always had a strong art community, but the weakness has forever been their celebration of mediocrity.

You are so right about this community of artists. It is vibrant, supportive and inventive. It is also bigger than you think. Maybe you just haven’t explored the art community as a whole so that you can truly appreciate the talent mixed with the freedom of exploration that is happening in San Antonio.

ANOTHER NOTE: Michele Monseau informs me this project was funded by the Idea Fund and CAM. Thanks.