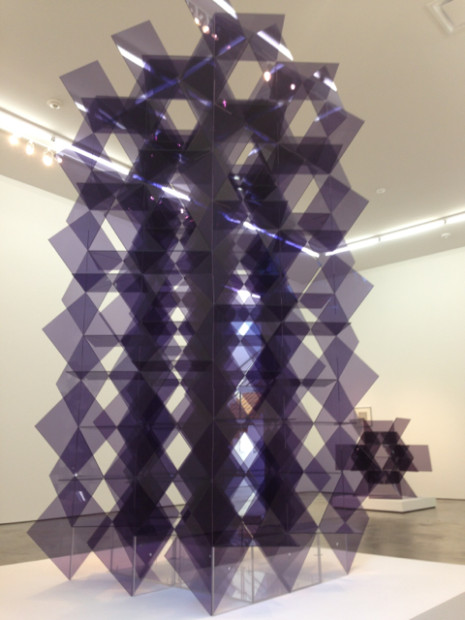 Patented in 1933, Plexiglas was arguably the most “futuristic” material of the 20th century – it was as transparent as glass but lightweight, durable and able to be used structurally. When you think about it, it still seems pretty space age in the 21st century. Don’t we all still expect everyone in the future to have clear furniture?

Produced by Röhm & Haas, a German company, Plexiglas was used for aircraft windshields and the like. (Not-so-fun fact: according to the current company’s website, the company and the Nazis brought in slave labor to meet manufacturing demand during WWII.) At first, its civilian use was for stuff like watch and instrument covers. After the war, Plexiglas made its way into a host of other applications and became more widely available.

The Spanish-born artist Francisco Sobrino began working in Plexiglas in 1961. Sobrino died only a few weeks ago, but some of his early Plexiglas work is on view in his current show, Structure & Transformation, at Sicardi Gallery. It’s some quite wonderful work that includes vintage pieces in Plexi as well as some which are partially remade, like Transformation instable juxtaposition / superposition, 2/3, 1963/2011, the piece shown above and below. 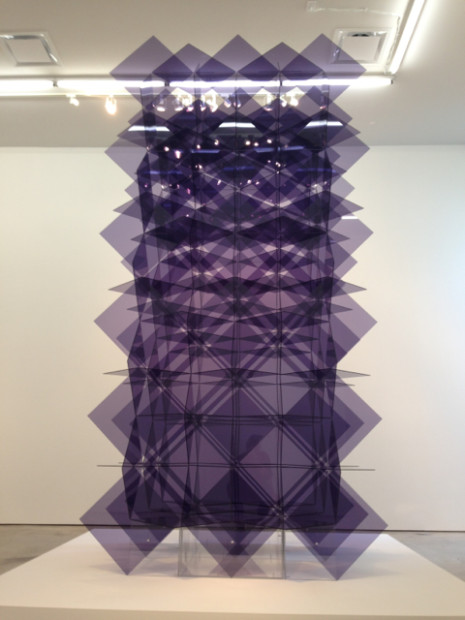 The sculptures are put together like kid’s building toys writ large—the squares of Plexiglas have slits that allow them to interconnect. Transformation took seven people to assemble.  The tinted squares overlap to create tonal variations. The real forms of the sculptures are hard to fix in your mind; they shape-shift as you move around them, becoming more or less transparent and integrating whatever and whomever is seen through them.

Maybe it’s some kind of retro zeitgeist but these circa-1960s sculptures seem incredibly contemporary. Sobrino, who spent ten years studying and working in Buenos Aires, was involved with the Latin America avant garde and optically kinetic work.  He moved to Paris in 1959 with the Argentine artist Julio Le Parc. They co-founded the Groupe de Recherche d’Art Visuel (GRAV) with goals of creating a collective and involving the public in their art. A significant number of other artists came from Latin American to Paris in the 1950s. Antonio Asis, whose own optically kinetic work is on view upstairs at Sicardi Gallery, moved from Buenos Aries to Paris then.  Venezuelan artists like Jesús-Rafael Soto and Carlos Cruz-Diez also made their way to Paris around the same time. Paris has a long history of hosting expat creative communities and it is fascinating to think about all these talented artists with overlapping concerns moving from Latin America and creating a community in Paris. There is something endearing about the idealism and optimism behind these artists’ avant-garde optical experiments and enthusiasm for new materials.

Sobrino’s exploration of materials didn’t wane. According to the bio on his website, the artist would go on to investigate solar energy in 1976 and used solar cells in a “renewable energy” sculpture in 1981. Francisco Sobrino died in France on May 11, 2014 at the age of 82. 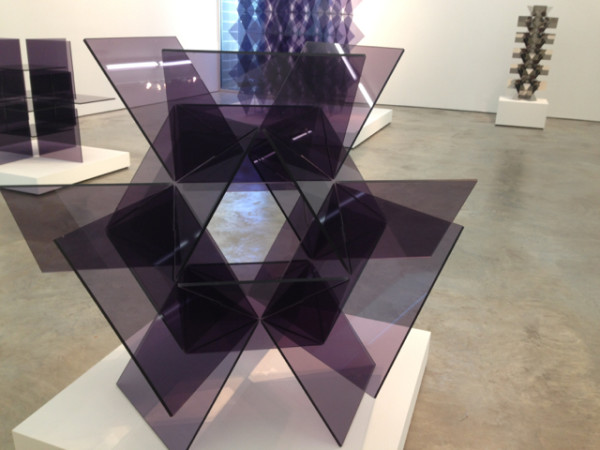 It’s one of my favorite Houston galleries. A great space and usually excellent art. I am biased towards hard-edge and geometric expression. . .