Dibs on Nothing!!! Extreme Minimalism Leads to Artist Feud

by Paula Newton May 30, 2014
FacebookTwitterEmail

Yesterday, The Guardian and a few arts journals reported on a tiff between performance artist Marina Abramović and conceptual artist Mary Ellen Carroll about Abramović’s upcoming show at London’s Serpentine Gallery. The exhibition, entitled Marina Abramović: 512 Hours, will involve the artist appearing in the gallery from 10 am-6 pm, six days a week, from June 11-August 25. It is billed as “a unique work created for the Serpentine” and apparently emphasizes the importance of “nothing.” 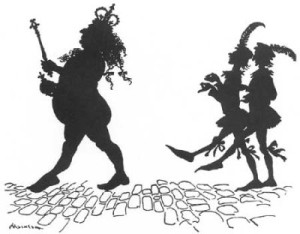 The problem is that Carroll already has an ongoing conceptual work called Nothing, so a group of concerned curators and art historians have written letters to Serpentine curator Hans Ulrich Obrist (not to be confused with Hans Christian Andersen, author of “The Emperor’s New Clothes,” which simply has to tie into this story somehow) complaining about the lack of acknowledgement of Carroll’s precedence and influence.

Because of the subject matter, The Guardian article contains some amazing quotations. It states that the art experts fear that without acknowledgement, “Carroll would find it difficult to perform ‘Nothing’ in future.” Says one art historian, “I am not prepared to say Marina Abramović is involved in plagiarizing or anything like that,” but adds that he told Obrist that it was important for the gallery and Abramović to “acknowledge this genealogy.” Another says he wouldn’t expect Abramović to “reel off the history of nothing, but the gallery should be responsible about the claims they make.”

Mary Ellen Carroll’s most radical incarnation of Nothing was presented in 2006, when she walked out of the door of her New York residence with “nothing” but her passport and the clothes on her back to travel for six weeks in a foreign country. (This prompted another comparison from one of the Serpentine complainants: “Mary Ellen’s work, when she left for Argentina, is in many ways more extreme.”) The conceptual artist, who works out of New York and Houston, is probably best known by Texans for her inclusion in the 2009 Contemporary Arts Museum Houston exhibition No Zoning: Artists Engage Houston, for which she took a suburban Sharpstown house and rotated it 180˚ on its original location. (Actually, that project was not completed until later; her exhibition work was a large table called prototype 180: table, the site of an interesting and eclectic series of performances and community activities—though as a round table, it should have merited 360˚.)

The Serbian-born performance artist Marina Abramović began her career in the early 1970s, but became a full-fledged super art star after her 2010 Museum of Modern Art retrospective, The Artist is Present, winning new fans and befriending celebrities such as Lady Gaga, James Franco and Jay Z. Her original performances created for that exhibition were seemingly very similar to the upcoming “unique work created for the Serpentine.” The Complex Art+Design article reports that Abramović came up with the idea of “nothing” in the middle of the night and she explained to BBC the origin of this new exhibition: “I called Hans Ulrich and I said ‘I don’t know how you’re going to take this, but this is what I want to do: nothing…there’s nothing.’”

Although there is a longer history of artists’ celebrations of “nothing” which can be added to the groundbreaking work of both Abramović and Carroll (John Cage’s 4’33” comes to mind), Abramović’s pitch to Obrist might also sound awfully familiar to network TV sitcom fans:

Nice inclusion of Seinfeld and a particularly funny kind of nothing.

Ho hum….a lot about nothing. Mary Ellon Carrol is good at that.

Nothing was here first .

Nothing is at stake!

Mass murderers are like works of modern conceptual art upon which we can impose our own meanings.

“I think you may have something here.”

Why don’t these artists divide nothing based on their practices? M E Carol can conceive nothing; Marina Abramović can perform nothing. If their nothings came into conflict, they could discuss it out in the middle of nowhere. Then everyone else could enjoy silence, which is not nothing.

So fine, Cameron! Couldn’t have said it better though Dave Hickey could probably have snorted and hurrumped more nothing about nothing.

I believe this fits. https://www.youtube.com/watch?v=zIV4poUZAQo

there’s also a number of shows at the Eugenia Butler Gallery in LA (1968-71): Kosuth’s nothing, Robert Barry locking the gallery for his exhibition with nothing inside, and Ruppersberg putting a sign in the empty gallery pointing visitors to his studio to name a few.

Setup: A family act going in to see a talent agent; either the whole family or just one family member (usually the father).
The agent asks what they do.
If the whole family is present, the act is performed for the agent; otherwise it is described.
Act: It is described in as much detail as the teller prefers.
While most tellings follow one of a few basic forms, the description of the act is meant to be an ad lib.
Traditionally, the description is tasteless, and ribald. The goal is to significantly transgress social norms. Taboo acts such as incest, rape, coprophilia, coprophagia, bestiality, necrophilia and murder are common themes.
Punch line: The shocked (or intrigued) agent asks what the act is called, and the proud answer (sometimes delivered with a flourish) is: “The Aristocrats!”

The humor of the punch line is usually considered to derive either from the extreme discordance between the group’s sophisticated name (and the regal “flourish” when stating it) and the vile acts they perform, or as a form of social satire aimed at the decadence of the aristocracy.”

Ok, ok, are you ready? It goes like zis:

Zo, a million postmodern artistz valk into a talent agency unt ze talent agent zes, “vat do you do?”

Zo ze talent agent pukes all over everyvon in hiz dizgust and vipes ze vomit from hiz mouth unt he asks? “vat do you call it”

Can I have mein museum show now?

I mean, nothing is on third.

Especially zince ve blitzkrieg all over it.

Hey mama, when you leave
Don’t leave a thing behind
I don’t want nothin’
I can’t use nothin’

I stood there like a block of stone
Knowin’ all I had to know
And nothin’ more
Man, that’s nothin’

Ah! the profundity of commentary on Nothing.
As Marlene Dietrich says, “I love quotations because it is a joy to find thoughts one might have, beautifully expressed with much authority by someone recognized wiser than oneself.”

Six midnights a week Marina Abramovic also broadcasts a short video summary about the “energies” and “space” in the Serpentine gallery. No pics of it just her head and shoulders and voice. Not a word about anything or anybody in London,England or anywhere else. Over 100 years ago Oscar Wilde wrote “the condition of perfection is idleness” and quite a few interesting things about art itself that Ms Abramovic,Mr Ubrist and Ms Peyton Jones are “as ignorant as swans” about. Ken Clark (of Civilisation book and 1969 tv fame) described the idle(and workaholic) rich of his day as such. They are the most boring people in England/the world today. The Artist Is Paid To Be Present for 512 Hours of her humourless twee existentialism and quaint “western buddhism”-as-art. The biggest protest march in british history is scheduled for October (see The Peoples Alliance Against Austerity website). Ms Abramovic will be back in her NY apartment by then counting her money and her rice grains (having not said a word about any innovative art in England). At least Yoko Ono invited two Pussy Riot artists to her South Bank event in London last year. It`s all gruel-propaganda at the Serpentine gallery.

Modernism: Assuming all aspects of life can be presuposed as structures, concieved as sums from parts and constructed as whole forms. Those structures can be represented as micro and macro abstractions to be deconstructed, re-ordered, and elaborated upon to yield new outcomes.

The concept named Modern, in fact, is the only natural process of thinking and order of life. The consideration of its process did not merit a custom term.

The coining of the term to align with an era inherently misrepresented its own originality obscuring Modernism’s genesis even to itself. Modernism repeats mistakes and yields contradictions as long as it continues to be misrepresented, and its self-regurgitation under post-laden monikers is an exercise in obsfucation.

Art, as a practice, is a repeat victim of this offense. Its movements illustrate abstractions of this narrative and each resets a continually shorter clock toward, but never reaching, a mythical singularity of original thought. The greatest fallacy after Modernism’s presumption of its own originality was the presumption of its products’ originality, that the form produced from restructuring was new, rather than relatively different.

There`s also Zizek`s book `Less Than Nothing`. In elementary quantum physics things and nothings mutate and shape-shift in ways stranger than any religion. The young american artist Akiane Kramarik revealing the mysteries of these new materialist and mystical realities in her paintings and her life. Her website and facebook are a joy to behold.