The End of the Original Cheesecake: Photographer Bunny Yeager

by Paula Newton May 29, 2014
FacebookTwitterEmail 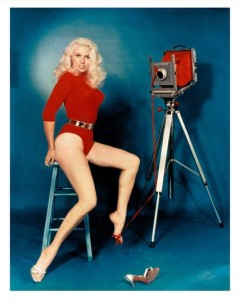 The model-turned-pinup-photographer died this past weekend of congestive heart failure in North Miami, Florida, at the age of 85, reports The New York Times. Born in 1939 near Pittsburgh, Linnea Eleanor Yeager’s family moved to Florida when she was 17. The self-described “shy” girl adopted the name Bunny and became a model and, in her early 20s, Yeager took a photography course in order to affordably make her own reprints for her modeling portfolio. But in the next couple of decades, she became a prolific photographer of what The Washington Post called the “golden age of cheesecake.” Best known for her pictures of the famous pinup model Bettie Page, she also photographed eight Playboy Playmates, some of whom she discovered herself. In a recent interview with the Associated Press (posted below), she stated, “It’s easier for a woman to ask a girl to take off her clothes.”

Other well-known photographers recognized her unique blend of celebratory naïveté and self-aware sexuality. Diane Arbus once described Yeager as “the world’s greatest pinup photographer” and Yeager’s self-portraits are cited as a major influence on the work of Cindy Sherman. Later, when men’s magazines became more explicit (a style which Yeager described as “kind of smutty”), she stopped shooting altogether.

In recent years, there has been a renewed interest in her work. In 2010, the Andy Warhol Museum presented an exhibition of Yeager’s self-portraits, followed three years later by a career retrospective at the Museum of Art in Fort Lauderdale. Dallas’ Photographs Do Not Bend Gallery presented a solo show of her work last September.