by Paula Newton May 27, 2014
FacebookTwitterEmail 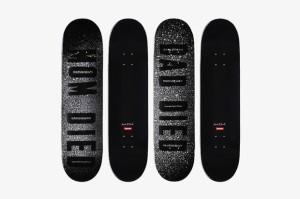 According to Hypebeast and other hipster guy lifestyle magazines, Supreme will be releasing two limited-edition skateboard decks designed by the artist. On the underside of the decks are the messages “MOM DIED” and “DAD DIED.” When explaining his motivation for the collaboration to Purple Fashion Magazine’s Annabel Fernandes, non-skater Flood stated simply, “Supreme asked. I have skater friends and acquaintances and they told me to do it.”

AF: Why “Mom Died” “Dad Died” specifically?
MF: I’m interested in the relation between heavy emotions and the mask of coolness.
AF:  Is there a message you want to convey in your skateboards?
MF: Fuck the world.

Okay then. The skateboard decks will be available in Supreme stores (in NY, LA and London) and online beginning May 29.